On Friday night, BET and MTV convened an hour-long, commercial-free townhall on police-involved shootings of African-Americans with only distant mentions of what transpired the night before in Dallas but focused heavily on denigrating law enforcement as hunters and “a gang” meant to terrorize blacks from America’s founding, the need for white people to recognize privilege, and lobby for the defunding of police nationwide.

Aside from a brief discussion with a former New York City detective, the so-called “historic” conversation was anything but in its one-sided, anti-police rhetoric that even went as far as to suggest the media at large weren’t doing their job in giving enough coverage to police shootings.

The beginning saw a relatively straightforward recap of the weeks events as well as attempts on the lives of police in Georgia, Missouri, and Tennessee but then co-host Charlamagne brought on fellow rapper Pusha T. to tout his view that black people will continue to die “until we find someone to actually police the police.”

Of course, Charlamagne jumped into wonder if he meant “Black Panther style basically” to which Pusha T. agreed that it could be “whatever style” because “it's a free for all and obviously they're doing just whatever they like.”

Before the Skype call ended, Charlamagne demanded that the black community must “tear that blue wall of silence down” and Pusha T. argued the “untrustworthy” police should be viewed as “a gang.”

The irresponsible rhetoric had only just begun as co-host Franchesca Ramsey lamented in the following segment about how the media have supposedly not been doing their jobs (which is easy to refute since the MRC’s Mike Ciandella found that to be the network’s #1 topic in 2015): 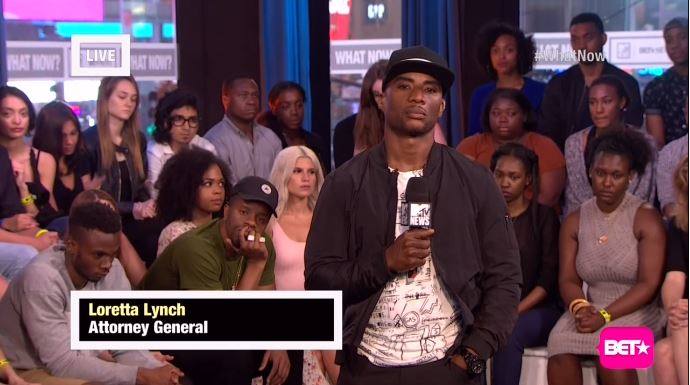 For an illustration of the conversation that Lynch had extolled, the hosts aired a user-submitted video that recklessly portrayed police as “hunt[ing] us down like dogs and gorillas and nobody wants to say anything.”

Such an event wouldn’t be complete without some time attacking not only the Founding Fathers but the Constitution and boosting white privilege as activist and “white ally” Sam White discussed with radical lefty and BET News host Marc Lamont Hill but Hill first mocked poor whites who claim they don’t have privilege.

White responded by trashing the country and urged whites of all incomes to recognize how “there are so many ways in which this country was founded to benefit a very specific group of people” that boil down to “white straight Christian men.”

With no factual evidence or context, White finished his thought by doing what else but attack police for “tackl[ing]” to African-American protesters:

We were in Times Square last night. I don’t think the officers paid me much mind at all, right? I was able to run around in the middle of the street, taking videos meanwhile, you know, two people got tackled, right? Two black people got tackled....For being there, right?

To further churn the outrage machine, Ramsey spoke with a millenial-aged, far-left woman named Holly who admitted that she felt responsible for the unrest in the country simply because she was born white: “It's terrifying to look at what’s happening right now and think, you know, maybe I have some part in this, not as an individual of course but as a system of whiteness.”

“It's great that there are a lot of resources for young white people who are trying to figure out what to do. The internet is your friend. There are some amazing organizations like Showing Up for Racial Justice that are organizing white people in communities across the country,” she added.

Naturally, liberal activist and gay illegal immigrant Jose Antonio Vargas arrived on scene and prefaced his thoughts about white people by gushing over the “historic” conversation about the racism that “we have been having since the founding of the country when the Constitution was written and we had the 3/5ths clause.”

Winding things down, rapper Talib Kweli served as one of the last guests and he sought to spin Black Lives Matter as being “firmly rooted in the tradition of Martin Luther King and peaceful protests and I think it's important that we understand that these are not terrorists organizations” like ISIS or the Ku Klux Klan. 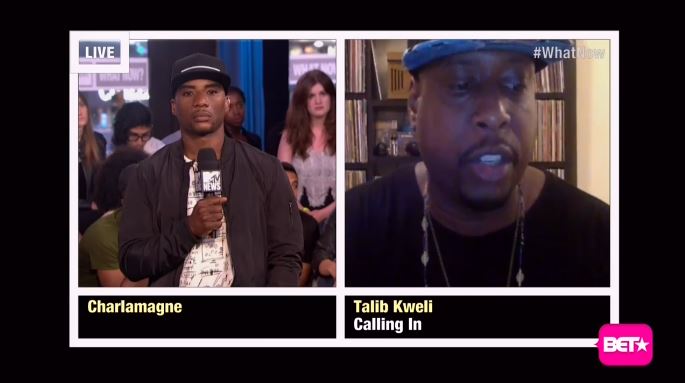 However, Kweli advocated for massive disruptions of public spaces and stores so that their demands could be met: “These are organizations that disrupt businesses and protest and find peaceful solutions and we have to support them because if we don't, the next thing that comes is somebody taking it to the level of violence.”

To close out the hour-long verbal onslaught against police and white people as their top public enemies, Black Trans Lives Matter co-found Cherno Biko trumpeted that “we are at war with the police” and ruled that Black Lives Matter must ensure that police are “defund[ed], demilitarize[d], and disarm[ed]”:

You know, we — we are at war with the police, but it's not a war that we are going to win with guns or violence. It's a war that we have to fight with love. The reality is that many of the freedom fighters who we look up to today, Harriette Tubman and Nat Turner, they would have been considered terrorists and so when we take a look at what is going on, now more than ever, we have to recognize that these issues are interconnected. I went down to Orlando to get information as Beyonce says but what they're not telling us is that the police killed the majority of the people at Pulse that night while trying to enter into the club and it's the same thing we were fighting against the 1969 at Stone wall so Black Lives Matter has three points. We need to defund, demilitarize, and disarm the police.