All told, the three network evening newscasts combined for two minutes and 18 seconds reporting on how Fields tweeted a photo of bruises on her arm from Lewandowski and statements from the Trump campaign that vehemently denied the incident ever happened.

The shortest mention was on the CBS Evening News with Scott Pelley as correspondent Julianna Goldman briefly alluded to it near the end of her full segment on the rowdy atmosphere of Trump rallies:

And it's not just Trump protesters. Today, Michelle Fields, a reporter for the conservative website Breitbart, said earlier this week a Trump’s campaign manager “grabbed me tightly by the arm and yanked me down.” She even tweeted a picture of a bruise on her arm. In a statement, the campaign called the accusation “entirely false” but a reporter from The Washington Post who was standing near Fields confirmed her account.

ABC’s World News Tonight with David Muir offered the most extensive and substantive time on this matter as Republican campaign correspondent Tom Llamas secured an interview with Fields. Unlike CBS and NBC, Llamas was also able to reveal a portion of an audio conversation shortly after the incident on Tuesday night in Florida between Fields and Washington Post reporter Ben Terris:

TERRIS: Yeah, he just threw you down.

FIELDS: I can’t believe he just did that. That was so hard.

Llamas explained that the Trump campaign head “declined to be interviewed for the story, but on Twitter today, calling Fields ‘an attention seeker.’” Speaking with Llamas, Fields declared: “Honestly, it’s been really hurtful because obviously, no one wants to be touched and violated like that.”

Before going back to anchor David Muir, Fields was asked what she would say to Donald Trump if she could speak to him and she implored him to consider what he would be feeling if this had happened to his daughter.

As for NBC Nightly News, anchor Lester Holt mentioned the incident in the show’s opening teases and national correspondent Peter Alexander followed a few minutes later with the “new allegations that hit closer to home for the campaign” and how the Trump campaign has suggested that Fields was well-known for exaggerating various incidents (despite each being well documented):

Trump's campaign manager Corey Lewandowski accused of roughing up a reporter. This afternoon, Michelle Fields from the conservative website Breitbart News tweeted this photo of bruises caused after she says Lewandowski nearly pulled her down by the arm following Trump's news conference Tuesday night. The campaign said the accusation is “entirely false,” writing, “no other outlet or reporter witnessed or questioned anything that transpired that evening,” and questioning whether Fields' accusation is part of a larger pattern of her exaggerating incidents.

Alexander closed the segment by noting that “[a]ll this [is] sure to come up in tonight's debate” and highlighting a tweet from Lewandowski using vulgar language to denounce Fields.

The transcript of the portion from the segment concerning Fields on ABC’s World News Tonight with David Muir on March 10 can be found below. 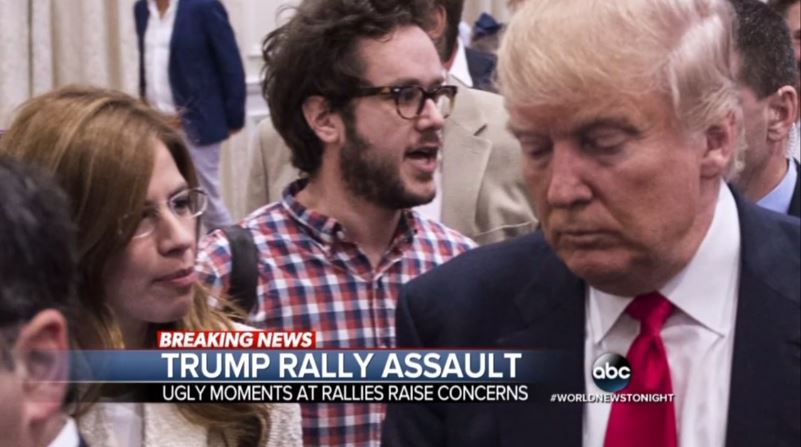 TOM LLAMAS: And now, Trump also dealing with accusations that, on Tuesday night, his campaign manager, Corey Lewandowski, assaulted Michelle Fields, a reporter with the conservative news site Breitbart. The incident captured in this audio recording.

TERRIS: Yeah, he just threw you down.

FIELDS: I can’t believe he just did that. That was so hard.

LLAMAS: Lewandowski declined to be interviewed for the story, but on Twitter today, calling Fields “an attention seeker.” In an interview with ABC News, Fields showed us the bruises where she says Trump’s campaign manager grabbed her.

FIELDS: Honestly, it’s been really hurtful because obviously, no one wants to be touched and violated like that. 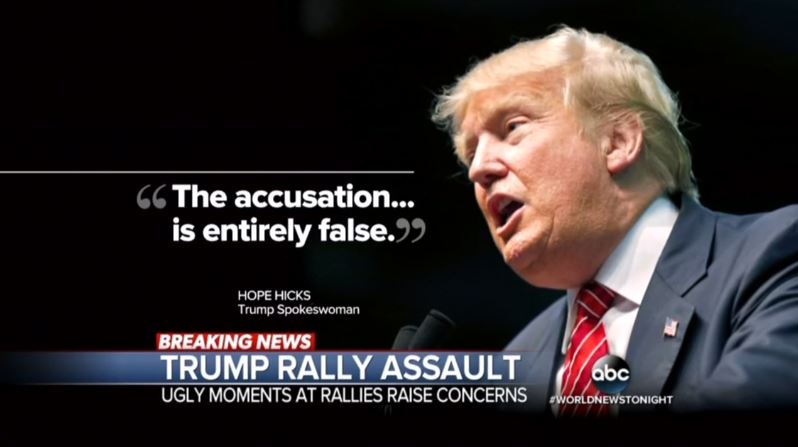 LLAMAS: A Washington Post reporter, Ben Terris, witnessed it, writing, he watched as Trump’s campaign manager “grabbed her arm and yanked her out of the way.” The Trump campaign telling ABC News “the accusation...is entirely false.” [TO FIELDS] If you had the chance to talk to Donald Trump right now, what would you say to him?

FIELDS: I would ask him to just put himself in my shoes and imagine if I was his daughter.