Following President Obama’s Sunday night address, the always large post-event panel on CNN had plenty to say, but it was quite the disconnect as many of their political commentators hailed the “straightforward” speech by the President while two of their foreign policy analysts panned the President’s “self-congratulation” and having “his head...in the clouds if he thinks this current strategy is going to succeed.”

In the moments after the speech, Jake Tapper, Gloria Borger, and John King offered up largely complimentary thoughts on the speech with Borger observing that she’s “never heard this language from the President before” as “he challenged Congress, not only on assault weapons, but vote for the use of force against ISIS” and “pledged we will destroy” the Islamic terror group.

Perhaps the most dramatic contrast came moments later when host Wolf Blitzer turned to author and Daily Beast writer Michael Weiss for perspective on ISIS and a prediction on how they will “likely to react to the President's address.”

What followed was nearly three-minutes of uninterrupted excoriation of the President that began with Weiss answering Blitzer’s question by stating flatly that “I think they'll laugh, frankly” as what “heard in the President's remarks self-congratulation and cheerleading.” Tearing into the President’s so-called strategy, Weiss exposed the disconnect between Obama and his own military advisers:

Look Wolf, when the President came out and said ISIS has been contained and he was speaking to the geographical expanse of their so-called caliphate, last week, the Chairman of the Joint Chiefs of Staff repudiated those remarks and said no, actually, they're not contained, we've had tactical victories on the battlefield but, strategically, ISIS is very much on the front foot.

Weiss explained how U.S. warplanes are returning from ISIS strikes with “75 percent of their payloads” remaining and alluding to reports that the President’s military leaders have been cooking the books on intelligence then tore into Obama’s failure to address the issue of Islamic radicalization

ISIS's threat with respect top these new attacks, the president said this is a new evolving thing, self-radicalization. The first year into his presidency, Wolf, Umar Farouk Abdulmutallab, the so-called underpants bomber, tried to blow up an airliner in the skies above Detroit. Umar Farouk Abdulmutallab was radicalizing while he was sitting at University College in Great Britain. We've been dealing with this menace for a decade now. There’s nothing evolved here. 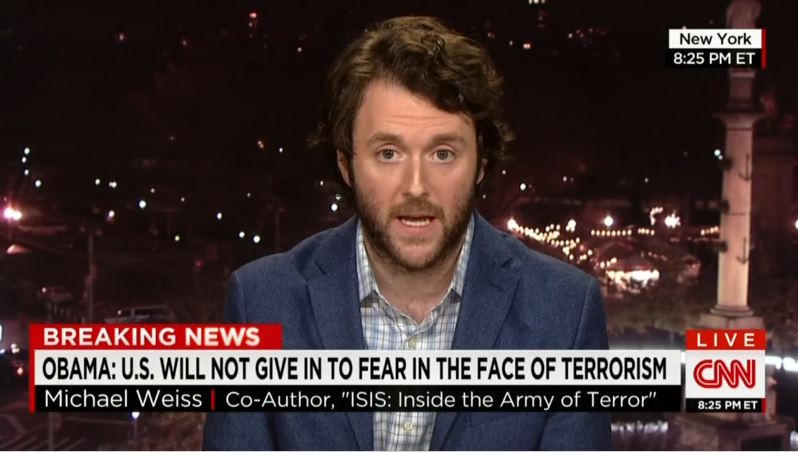 Growing even more frank, Weiss lamented that the President hasn’t come out and admitted to not identifying the threat of ISIS after having labeled them “the JV team well after [he] was briefed and knew what al-Qaeda in Iraq had been up to, including strapping mentally disabled young girls with suicide bombs and marching them into police headquarters.”

As if he wasn’t agitated enough, Weiss concluded the takedown by declaring that the President really has “his head...in the clouds if he thinks this current strategy is going to succeed” since:

In the last two months, two months and change, ISIS has perpetrated five major attacks. Three of them have been in NATO countries, Wolf. Okay? This is not a contained threat. This is not something that we can sit, you know, go to bed quietly at night and think, the United States America is going to be victorious...So, I'd like a little more realism and a little less rah-rah, you know, we're doing great.

Looking to right the ship for the President, military analyst Mark Hertling strongly pushed back as did former White House adviser and CNN political commentator Van Jones, who gave the President “an ‘A’” for passing both Jones’s “head test and heart test” in appealing to Americans.

Despite the President having made seven State of the Union addresses and multiple primetime speeches, Jones claimed that “you have lots of people who have never heard the President speak about this except a three-second sound bite on the evening news” so Sunday meant “[h]e finally got a chance lay out his concern as a parent, et cetera.” 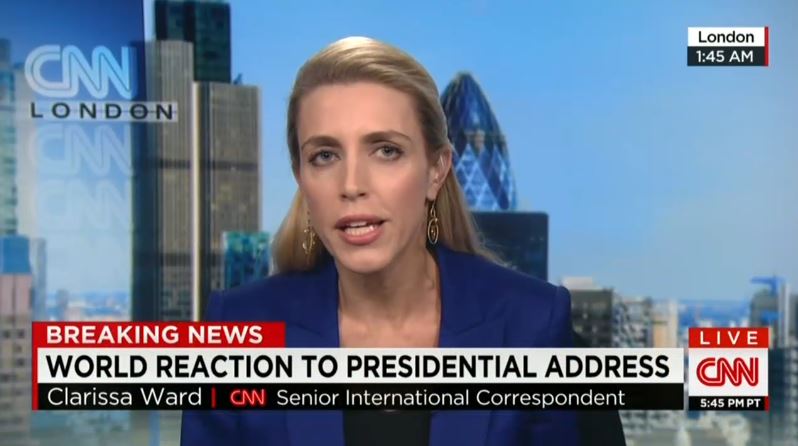 Blasting Congress as having “done literally nothing” and “passed not one bill” or “given him any power or any help,” Jones implored the legislative branch to work with him towards “one country” along with passing gun control legislation.

Speaking from London, senior international correspondent Clarissa Ward gave her quick thoughts after a break and largely brushed off a question from Blitzer asking if the President’s speech will cause world leaders to become more united behind him against ISIS:

[Y]ou're going to hear, you know, people supporting, coming out, leaders saying that they support what the President said, but you're not going to really see much in terms of a major reaction because there was nothing that President Obama said here that deviated from what we've heard him say many times before. He essentially reiterated the U.S.’s current strategy for dealing with ISIS.