Hyping that Warren was “[w]ho many progressives urged to run against Hillary Clinton,” Alexander played clips of White House Press Secretary Josh Earnest praising Biden and offering a “cliffhanger” to reporters that Obama might make an endorsement before the Democratic nominee is formally selected.

As he did on NBC’s Today, Alexander quipped that “Biden's meeting with Warren has electrified the political world, especially liberal Democrats not sold on Clinton, many of whom have flocked to Bernie Sanders.”

Only at the conclusion of his report did Alexander mention Clinton’s e-mails: “October 22nd, key to the Democratic race, how Clinton handles congressional questions about Benghazi and her use of personal e-mail.”

Over on ABC, fill-in anchor (and former Clinton staffer George Stephanopoulos) and chief White House correspondent Jonathan Karl ducked Clinton’s e-mail server and instead focused stayed on Biden and the “awkward spot” the President could be in if both mounted White House bids and a soundbite from an adviser with the Draft Biden PAC.

Reporting for the CBS Evening News, correspondent Julianna Goldman cited sources in telling viewers that “President Obama has given his Vice President the green light the mull a White House run,” but was otherwise very tepid toward Biden (compared to NBC).

While Earnest praised Biden, Goldman ruled that it was “not an endorsement” as “[a] Biden candidacy could be awkward for the President.” Nonetheless, Goldman detailed how Biden’s “intensifying deliberates are tied to growing concerns among donors and top Democrats that the controversy over Clinton's private e-mail server is snowballing.”

Goldman further explained how a number of Obama fundraisers have yet to commit to Clinton and then became the sole network reporter to highlight possible roadblocks for a successful run by the Vice President: “But a Biden candidacy wouldn't be free of his trademark gaffes. Among the other considerations that weigh against him, he's run twice before. Now 72, he would be the oldest person ever elected president.”

The relevant portions of the transcript from August 24's NBC Nightly News can be found below. 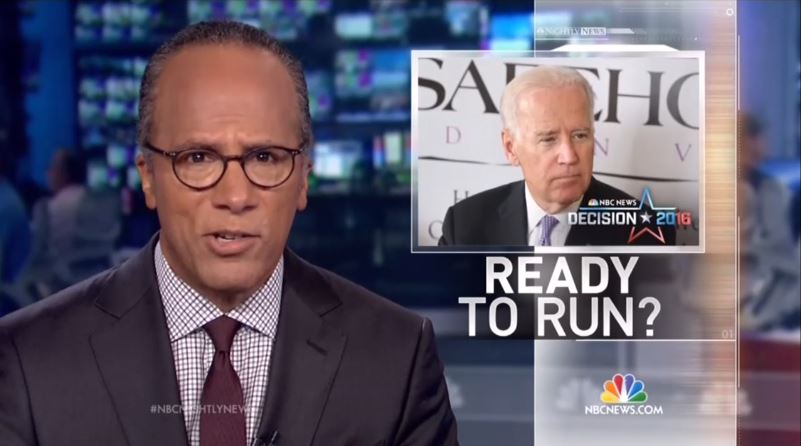 LESTER HOLT: A big dilemma is emerging for the President of the United States amid more signs that Vice President Biden is seriously considering challenging Hillary Clinton for the Democratic nomination and that leads to the next big question: who would President Obama back? His own VP or his former secretary of state? NBC’s Peter Alexander with what the White House is saying.

ALEXANDER: Who many progressives urged to run against Hillary Clinton and today, his weekly lunch with President Obama. Was 2016 on the menu? Press Secretary Josh Earnest today came prepped with answers, reiterating the President’s words that adding Biden as his running mate was the smartest political decision he ever made.

WHITE HOUSE PRESS SECRETARY JOSH EARNEST: I think that should give you some sense of the President's view of vice president Biden's aptitude for the top job.

ALEXANDER: But Earnest also complimented Clinton before offering this cliffhanger:

EARNEST: I wouldn't rule out the possibility of an endorsement in the Democratic primary.

ALEXANDER: Still, Biden's meeting with Warren has electrified the political world, especially liberal Democrats not sold on Clinton, many of whom have flocked to Bernie Sanders. 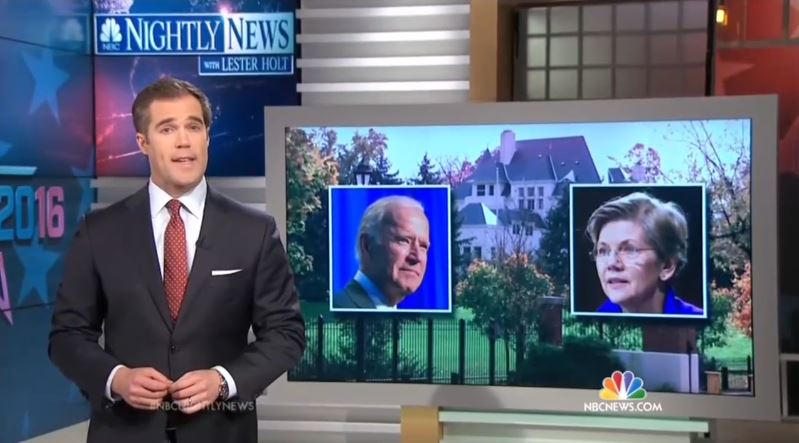 ALEXANDER: People briefed on Biden and Warren’s conversation tell NBC News the VP told Warren he was seriously considering a 2016 run but did not directly ask for her support. Today, Biden announced a new communications director, a former spokeswoman for John Edwards’ presidential campaign and tonight, reports that he'll huddle privately with major Democratic fundraisers next month.

THE ROTHENBERG & GONZALES POLITICAL REPORT’s NATHAN GONZALES: The Vice President wants to be drafted into this race and viewed as a savior of the Democratic Party.

ALEXANDER: What's next? September 23rd, the end of summer. Biden has said he'll decide by then. October 13th, the first Democratic debate and October 22nd, key to the Democratic race, how Clinton handles congressional questions about Benghazi and her use of personal e-mail.