CBS and NBC continued to provide positive coverage of Hillary Clinton’s visit to Democratic Senator Tom Harkin’s steak fry event in Iowa on Monday night after both networks gushed over her appearance in their morning shows and NBC’s Meet the Press wondered on Sunday if she might not be liberal enough for Iowa Democrats in 2016.

The nearly three minutes of coverage between the two networks was in comparison to their zero coverage of news from investigative reporter Sharyl Attkisson that aides to Clinton when she was Secretary of State engaged in a weekend meeting that included the removal of documents related to the Benghazi attacks that portrayed her in a negative light.

NBC Nightly News anchor Brian Williams declared that “[w]hatever else is remembered from Hillary Clinton's trip to Iowa this past weekend to attend a big political steak fry,” Clinton’s “I’m back” soundbite from her speech to the crowd “may survive for all-time.”

Over on the CBS Evening News, anchor Scott Pelley informed viewers that the mid-term elections are seven weeks away, but then immediately dropped that subject and began talking about Clinton’s visit to Iowa and then gave way to pro-Clinton report from CBS News congressional correspondent Nancy Cordes.

In a report published on The Daily Signal, Attickson interviewed former Deputy Assistant Secretary Raymond Maxwell, who stated that the weekend meeting took place in the basement of a room at the State Department and included going through “boxes and stacks of documents” relating to the attack that left four Americans dead.

After not being invited for the session, Maxwell still found out about it and showed up anyway. There, he found one of Clinton’s top advisers and she informed him that “we are going to go through these stacks and pull out anything that might put anybody in the [Near Eastern Affairs] front office or the seventh floor in a bad light.” Maxwell told Attkisson that “the seventh floor” refers to then-Secretary Clinton and other top State Department advisers.

During an interview on Monday morning with the Fox News Channel (FNC), Republican Congressman Jason Chaffetz named two Clinton advisers who were said to be present at this secret meeting: Then-State Department Chief of Staff Cheryl Mills and Deputy Chief of Staff Jake Sullivan. Attkisson noted that Mills previously served as a White House counsel to former President Bill Clinton during his impeachment proceedings and Sullivan previously worked for the presidential campaigns of Hillary Clinton and Barack Obama.

Returning to coverage of Clinton’s Iowa visit, Cordes extolled how “10,000 Iowa Democrats welcomed Clinton like a long-lost friend” after not having stepped foot in the state following her third-place finish in the Iowa caucuses in the 2008 Democratic presidential primary.

Cordes observed that Clinton was “the main attraction and certainly seemed like a candidate” and interviewed a Clinton supporter who was able to get a selfie with her in crowd of supporters.

While NBC’s Brian Williams found the “I’m back” line noteworthy, what he did not mention was what her husband and former President Bill Clinton said about Republicans at the same event: "Half the time, they’re not even running against their opponents. They’re trying to get you to check your brain at the door, start foaming at the mouth,” he said. “The last thing they want you to do is think."

In addition, Williams ignored poll numbers from NBC News and The Wall Street Journal that show the favorability ratings of Hillary Clinton have fallen from 59 percent in February 2009 to just 43 percent with 41 percent of Americans having negative views of her.

The complete transcript from the segment that aired on the CBS Evening News with Scott Pelley on September 15 is transcribed below. 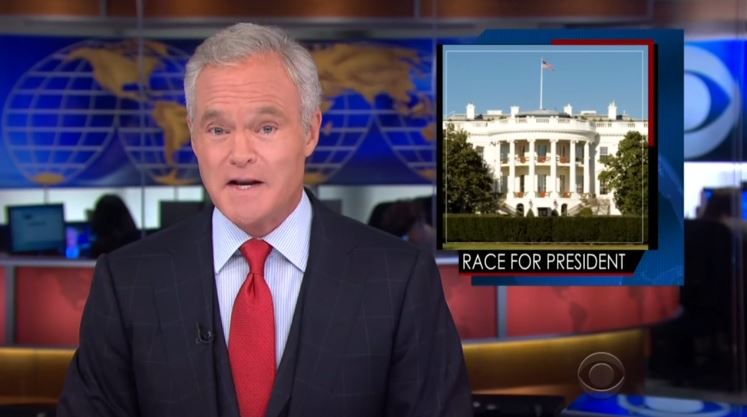 SCOTT PELLEY: The mid-term elections are seven weeks away, but political pundits, of course, are already looking past them to the race for president in 2016. Over the weekend, Hillary Clinton was in Iowa for the first votes are cast in the race for the nomination. She attended Senator Tom Harkin's annual steak fry. It’s a must for Democratic presidential candidates, though Clinton is still not saying if she'll be one. Nancy Cordes is in Des Moines.

NANCY CORDES: 10,000 Iowa Democrats welcomed Clinton like a long-lost friend. She hasn't been to Iowa since she ran in 2008. So naturally, they wondered if this means she's planning a repeat.

CLINTON: It is true. I am thinking about it, but – but for today, that is not why I'm here. I'm here for the steak.

CORDES: The annual Harkin steak fry has hosted Democratic presidential hopefuls for decades, including Arkansas Governor Bill Clinton in 1992 and Senator Hillary Clinton in 2007, though she had to share the stage with five of her opponents. This time, she was the main attraction and certainly seemed like a candidate, posing for a photo op at the grill, lingering on the rope line, shaking hands. [TO LINDA JOHNSON’s PHOTOS WITH HILLARY] Wow. That's pretty good. 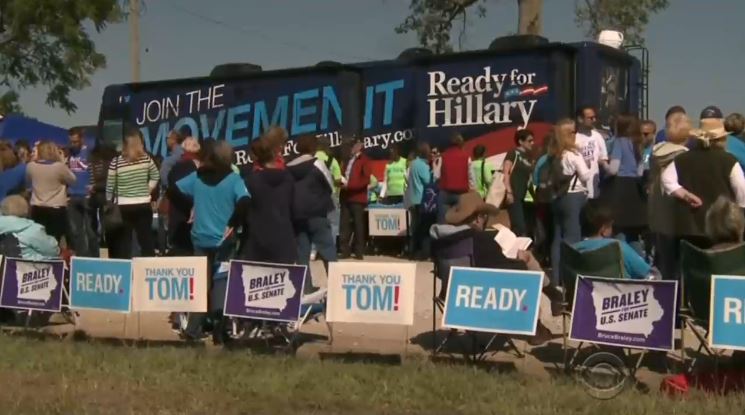 CORDES: Linda Johnson of Des Moines asked for a selfie with the former First Lady and got one.

LINDA JOHNSON: I'm pretty much leaning towards her if she runs.

CORDES: And volunteer supporters were everywhere, handing out pro-Clinton buttons and signs.

CORDES [TO CLINTON]: You wet your appetite for another campaign?

CORDES: Clinton came in third here in 2008, a loss she has described as excruciating, so it's no surprise she's laying some early groundwork in Iowa, 16 months before the caucuses and so is another possible contender, Vice President Joe Biden, who will be here in the state, Scott, on Wednesday.

PELLEY: Only 731 days until the presidential election. Nancy, thank you very much.

The full transcript from the news brief that aired on September 15's NBC Nightly News can be found below. 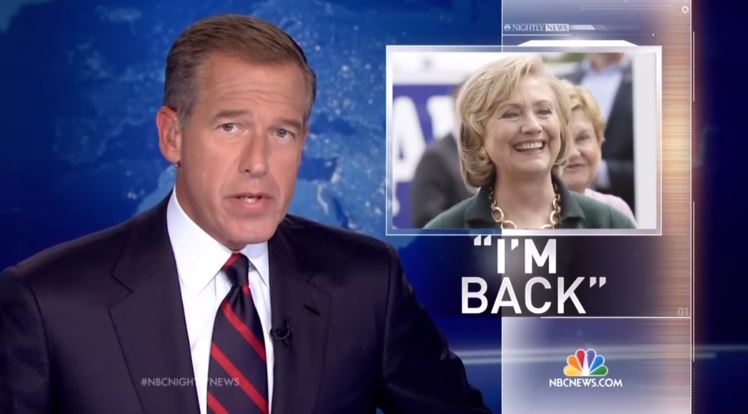 BRIAN WILLIAMS: Whatever else is remembered from Hillary Clinton's trip to Iowa this past weekend to attend a big political steak fry, along with her husband, it's this soundbite from her speech that may survive for all-time.

WILLIAMS: She says she's thinking about running. Our own Andrea Mitchell contends she sure appears to be running. Clinton wrote in her new book that she was devastated to finish third there behind Obama and Edwards back in '08.