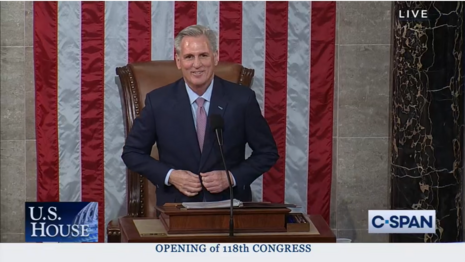 Under the heading “Tin Foil Hat Party,” a headline in the once-influential music magazine Rolling Stone spouted about “The Conspiracies Powering the GOP-Controlled House -- How Republicans have put disinformation and falsehoods at the center of their governing agenda.”

What are some of the ghastly things the GOP wants to do with a new committee?

The committee would also have full freedom to investigate any civil liberties-related issue and scrutinize how the federal government collected and used information about Americans, fueling right-wing paranoia about government overreach.

Yes, Rolling Stone magazine, the newsletter for 70s’ counterculture, now considers concern for civil liberties and government surveillance mere paranoia. What’s next? Selling I Love the FBI iron-ons in its back pages?

The story by Kara Voght, posted on Tuesday, opened:

Republicans launched their control of the House of Representatives with a sprawling, paranoid new initiative: The Select Committee on the Weaponization of Government, an interrogation of alleged efforts to silence and punish conservatives across federal agencies. The undertaking signaled the obvious political goal among Republican lawmakers to score points against the Biden administration and their Democratic opponents. It also signaled something more ominous: that Republicans intend to use their newfound power to turn fringe theories into mainstream politics.

The most noxious online conspiracies, the ones that a public official would once have been exiled for relaying and disseminating with any gravity, are now the focus of official congressional inquiries. The committee would also have full freedom to investigate any civil liberties-related issue and scrutinize how the federal government collected and used information about Americans, fueling right-wing paranoia about government overreach….

What will those Republican fiends do next!

Voght provided no evidence suggesting Republican aims were misguided, she just stuck on the “right-wing paranoia” label and trusted her readership to dismiss any concerns.

She introduced a list of several supposedly scary items: “Here’s a guide to the conspiracies fueling the GOP-held House.”

Yet she led off the list of “conspiracies” with a probable fact: The “lab-leak theory,” that the Covid virus escaped a laboratory in Wuhan, China. Even liberal comedian-host Jon Stewart found the theory a likely explanation.

Not even Dr. Fauci calls it a conspiracy theory, and Voght’s text certainly doesn’t back up that angle:

The so-called “lab leak” theory has never been substantiated. There is no evidence that the virus had been in a laboratory prior to the start of the pandemic and peer-reviewed scientific papers have put forth overwhelming evidence that the pathogen likely lept [sic] from animals to humans….(Fauci, for his part, has previously said he has a “completely open mind” about whether the outbreak originated in a lab, though has pushed back against lawmakers who have asserted the lab-leak theory in past hearings.)

The next so-called Republican conspiracy: opposing Biden’s indefensible “Disinformation Governance Board,” i.e., the “Ministry of Truth." The ACLU, belatedly rediscovering its civil liberties mandate, also opposed it. But Voght sympathized with the cringeworthy songbird, and proposed executive director of the Board, Nina Jankowicz.

Jankowicz spread her own anti-Republican election disinformation by decrying the Hunter Biden laptop story, making her a dubious choice for a potentially dangerous government agency.

Voght also had various nits to pick about Republican claims about armed IRS agents and the phrase “domestic terrorists” to dismiss concerns over Attorney General Merrick Garland threatening to sic the FBI on conservative parents showing up to school board meetings.