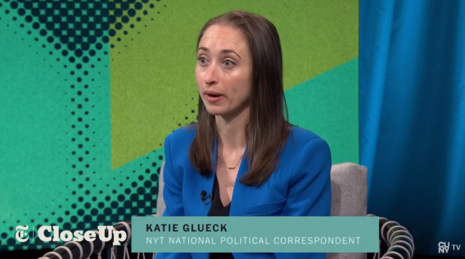 Reporter Katie Glueck huddled up with the Democrats on their new campaign tactic while reporting “Progressive Groups Push Democrats on ‘Freedom’ for Midterm Election Message,” which redefined “freedom” as “abortion.” As if saying “freedom” will make voters forget years of moralistic liberal calls for lockdowns and mandates at the expense of actual individual freedom.

What does this freedom entail? Abortion, mostly.

The move is the latest evidence that Democrats at every level of the party and of varying ideological stripes….are increasingly seeking to reclaim language about freedom and personal liberty from Republicans. It is a dynamic that grew out of the overturning of Roe v. Wade in June, and one that is intensifying as more states navigate abortion bans while Republicans nominate election deniers for high office.

Glueck at least allowed a Republican a pithy quote:

In a statement, Emma Vaughn, a spokeswoman for the Republican National Committee, highlighted the effort to paint Democrats as anti-freedom over pandemic measures, calling them the party of “shuttered businesses, school lockdowns, masks on toddlers and forced vaccines.”

Last month, The Washington Post also hyped the Democrats as the "party of freedom" because of their support for abortion on demand.

They waved signs that read “Defeat the mandates” and “No vaccines.” They chanted “Protect our kids” and “Our kids, our choice.”

Almost everyone in the crowd of more than three dozen was a parent. And as they protested on a recent Friday in the Bay Area suburb of Orinda, Calif., they had the same refrain: They were there for their children.

Most had never been to a political rally before. But after seeing their children isolated and despondent early in the coronavirus pandemic, they despaired, they said. On Facebook, they found other worried parents who sympathized with them. They shared notes and online articles -- many of them misleading -- about the reopening of schools and the efficacy of vaccines and masks. Soon, those issues crowded out other concerns.

Frenkel didn’t bother analyzing the strengths of the actual argument to keep schools open, as if admitting that keeping public schools shuttered was indefensible policy.

Ms. Longnecker and her fellow objectors are part of a potentially destabilizing new movement: parents who joined the anti-vaccine and anti-mask cause during the pandemic, narrowing their political beliefs to a single-minded obsession over those issues. Their thinking hardened even as Covid-19 restrictions and mandates were eased and lifted, cementing in some cases into a skepticism of all vaccines.

….Fueled by a sense of righteousness after Covid vaccine and mask mandates ended, many of these parents have become increasingly dogmatic, convinced that unless they act, new mandates will be passed after the midterms.

A correction revealed Frenkel’s desire to tar the fight for normal lives for children as extremist.

Because of an editing error, the article included a link to a “Stop the Steal” Facebook group, suggesting that it was among the groups [former Democrat and mother Natalya] Murakhver had joined. She was not engaged with that group, and the link was removed from the article.