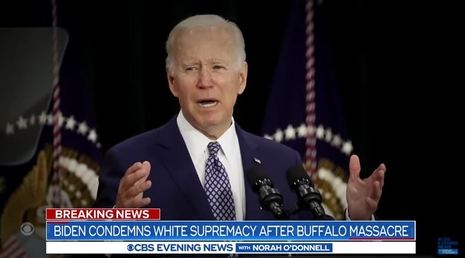 In Wednesday’s New York Times front-page story, “Biden Heads to Buffalo to Mourn Shooting Victims,” White House correspondents Zolan Kanno-Youngs and Peter Baker nodded along with Biden’s supposition, on a visit to Buffalo, that “white supremacy” was a poison killing America. as personified by the disgusting killings of 10 black shoppers at a supermarket.

Yet the Times’ frenzied attacks on Republicans based on that crime didn’t carry over to the inconvenient pattern of black-on-Asian hate crimes, demonstrated on Page 17 Wednesday:

President Biden called on Americans on Tuesday to “take on the haters” and “reject the lie” of racial replacement that animated a white man who gunned down Black shoppers in the latest eruption of violence targeting people of color in the United States.

Declaring that “white supremacy is a poison” coursing through America, Mr. Biden flew to this grief-stricken city in western New York not just to mourn the 10 people killed in Saturday’s shooting rampage but to confront “ideology rooted in fear and racism” and accuse conservative political and media figures of exploiting it.

Of course, Tucker Carlson was a target, accused of spreading “replacement theory,” which has come to mean anything race- or immigration-related that a hostile liberal wishes it to mean.

Reporters were eager to use the tragedy in Buffalo to make political hay at Republican expense:

Asked later by reporters if certain Republicans or Mr. Carlson deserved blame, Mr. Biden said, “I believe anybody who echoes the replacement is to blame -- not for this particular crime -- but it, there’s no purpose. No purpose except profit and, or political benefit. And it’s wrong.”

Mr. Carlson said on his show on Monday night that the focus on him demonstrated “the ruthlessness and dishonesty of our political leadership” who wanted to use a tragedy to justify muzzling critics of the establishment.

Kanno-Youngs and Baker credited Biden for bravely “confronting the sort of violent white extremism displayed in 2017, when neo-Nazis and right-wing militias marched into Charlottesville, Va., and Mr. Trump declared that there were “very fine people” on both sides.”

Meanwhile, Edgar Sandoval and Daniel Victor reported “Arrest in Attack on 3 Asian American Women in Dallas.” The alleged shooter is Jeremy Smith, a 36-year-old black man, but the Times, which has spent the days after the Buffalo massacre tossing smears of “white supremacy” at the entire Republican Party, skipped that aspect of the Dallas story. (One would have to check local news to learn the suspect is black.)

A man who the police said had expressed anti-Asian sentiment in the past has been arrested in connection with a shooting last week at an Asian-run hair salon in Dallas that left three women wounded.

The man, identified as Jeremy Smith, 36, is accused of firing more than 12 rounds into the salon in an attack that injured three Korean American women, the authorities announced on Tuesday.

Smith is also suspected in two other anti-Asian shootings. The local police chief has no doubts about the man’s motivation for targeting Asians.

[Dallas police chief Edgardo Garcia] said the police learned during their investigation that Mr. Smith had expressed anti-Asian bigotry on several occasions after he was involved in a car accident two years ago with a man of Asian descent….“It’s an issue of hate. It’s an issue of a hate crime….”

So the Times ran an entire story about a black-on-Asian “hate crime” without noting the alleged perpetrator is black? It’s not even the first instance of the paper cowardly evading the inconvenient reality.