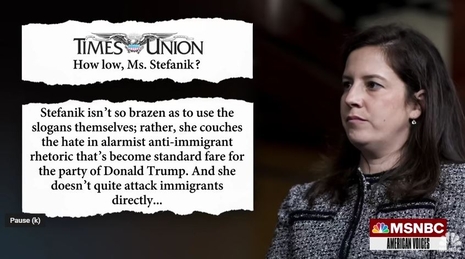 The mass murders by a shooter at a supermarket in Buffalo inspired the New York Times to push liberal politics. Not gun control, which would be ridiculous enough, but in an even more malign direction, accusing mainstream Republicans of aiding deadly racism like the killer and his manifesto on “replacement theory.” Times reporters Shane Goldmacher and Luke Broadwater’s smear appeared in Tuesday’s paper: “Republicans Deplore Killings, but Few Eschew Nativist Politics Behind Tragedy.”

The mass shooting in Buffalo was the work of a lone gunman but not the product of an isolated ideology.

In a manifesto, the suspect detailed how he viewed Black people as “replacers” of white Americans. The massacre at the grocery store on Saturday trained a harsh light on the “great replacement theory,” which the authorities say he used to justify an act of racist violence -- and on how that theory has migrated from the far-right fringes of American discourse toward the center of Republican politics.

Republicans across the spectrum were quick to denounce the killings. But fewer party leaders appeared willing to break with the politics of nativism and fear the party has embraced to retain the loyalties of right-wing voters inspired by Donald J. Trump.

After the murders, the Times moved with unseemly eagerness to retrofit unrelated issues into a sinister racist agenda by the GOP.

….Republicans have used rhetoric that suggests a tacit willingness to try to appeal to elements of the far right. Ahead of November’s midterm elections, Republican candidates have ramped up warnings about the threats being posed to what is cast as real or traditional America. Often unsaid is what that bygone era looks like: white, male-dominated, Judeo-Christian and heterosexual.

Issue after issue has been recast as a reason for Republican voters to fear for their culture and values: Transgender rights threaten girls sports. The removal of statues threatens to expunge Confederate history in the South and other white historical figures elsewhere. Critical race theory is portrayed as rewriting American history -- and overhauling how it is taught -- to emphasize episodes of racism.

More than a dozen candidates and outside groups have run ads warning of an immigrant “invasion” in the country or otherwise diluting the power of native-born citizens. Several candidates have falsely said that Democrats are opening the border specifically to let undocumented people in to vote.

But letting illegals (“undocumented people” is the Times’ euphemism) vote is not some phony fantasy cooked up by Republicans: It’s happening starting next January in New York State.

The reporters allowed Wisconsin Republican Sen. Ron Johnson a little media criticism: “Pushing the lie that criticizing this admin’s policies in any way supports ‘replacement theory’ is another example of the corporate media working overtime to cover up the Biden admin’s failures.”)

The paper’s own definition of “replacement theory” was instructive.

…a racist conspiracy theory that an unnamed cabal is perpetually seeking to encourage nonwhite immigration to mostly white countries in an effort to change their demographic makeup.

If “replacement theory” requires an unnamed cabal, it’s interesting that Republicans specifically blame not some “cabal” but Democrats. Also, Republican concern is less about culture per se than voting power: The fear is that Democrats are indeed trying to change the demographics of the country by importing new Democrat voters from Latin America, thus possibly changing the electorate in their favor (though with the recent trend in Hispanic voting patterns toward Republicans, who knows?) Many also favor voting rights for illegal immigrants. No “replacement theory” necessary.