New York Times Says Illegal Aliens Voting Is a 'Fake Threat' -- But Wait, What About...

The front page of Friday’s New York Times carried a two-pronged attack on Republicans. Reporter Jazmine Ulloa accused the Republican of both lying and racism in “Republicans Devise Fake Threat To Election, by Way of the Border.”

First, Ulloa declared Trump and his (white) voters to be “nativist and xenophobic.” In paragraph two she’d added the "fake threat" from the headline to the mix. 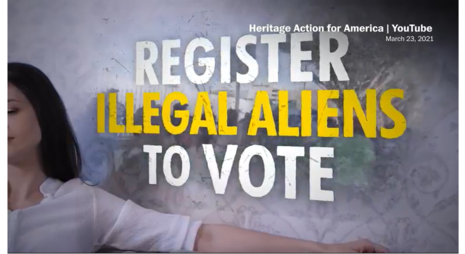 Six years after former President Donald J. Trump paved his way to the White House on nativist and xenophobic appeals to white voters, the 2,000-mile dividing line between Mexico and the United States has once again become a fixation of the Republican Party.

But the resurgence of the issue on the right has come with a new twist: Republican leaders and candidates are increasingly claiming without basis that unauthorized immigrants are gaining access to the ballot box.

Voter fraud is exceptionally rare, and allegations that widespread numbers of undocumented immigrants are voting have been repeatedly discredited. Yet that fabricated message -- capitalizing on a concocted threat to advance Mr. Trump’s broader lie of stolen elections -- is now finding receptive audiences in more than a dozen states across the country, including several far from the U.S.-Mexico border.

Readers should ask: In elections that are decided by six voters or 600, how "widespread" does illegal-alien voting have to be?

Heritage Action advocated against the Democrat push for "voting rights" legislation that would require national "automatic voter registration" that has ended up registering illegal aliens to vote in the states that already have it. They note one federal law specifically prohibits DMV officials—even when they know a license applicant is not a citizen—from “mak[ing] any statement to an applicant or tak[ing] any action the purpose or effect of which is to discourage the applicant from registering to vote.”

Perhaps people are concerned about voting by illegal immigrants because the New York Times itself finds it an alarming threat that anyone would ask a voter for proof of citizenship at the polls. It's a "fake threat" -- until someone starts requiring evidence?

On April 4 reporter Nick Corasaniti treated the seemingly obvious requirement that only citizens should be allowed to vote as controversial:

Gov. Doug Ducey of Arizona has signed legislation requiring voters to prove their citizenship in order to vote in a presidential election, swiftly drawing a legal challenge from voting rights activists who argued that it could keep tens of thousands of voters from casting a ballot.

The Arizona measure, passed into law on Wednesday, also requires newly registered voters to provide a proof of address, which could have a disproportionate impact on students, older voters who no longer drive, low-income voters and Native Americans.

The decision set up a bifurcated system in Arizona. There are now roughly 31,500 “federal-only” voters in the state, or people who are not eligible to vote in state elections because they have not provided documents that prove citizenship as required by Arizona law, according to the secretary of state’s office.

And GOP concern about illegals voting is far from “concocted,” given that some municipalities in the United States allow noncitizens to vote in local elections:

Fifteen municipalities across the country allowed noncitizens to vote in local elections as of January 2022. Eleven were located in Maryland, two were located in Vermont, one was New York City, and the other was San Francisco, California.