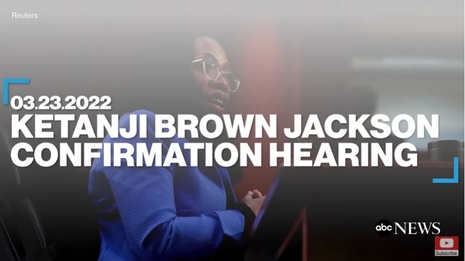 But first, reporters Carl Hulse and Jonathan Weisman fawned over the liberal nominee.

Judge Ketanji Brown Jackson emerged on Wednesday from two grueling days of testimony before the Senate Judiciary Committee having weathered escalating Republican attacks on her record but leaving Democrats confident that she would become the first Black woman on the Supreme Court.

Ironically, the Times got angry when Jackson was asked to define a “woman” in the hearing, as shown later.

The hearing steadily deteriorated on Wednesday as Republican senators repeatedly assailed Judge Jackson about her sentencing decisions on specific child sex abuse cases after spending much of the day on Tuesday peppering her with similar questions.

The online headline to Supreme Court reporter Adam Liptak’s story Thursday was ironic: “Confirmation Hearings, Once Focused on Law, Are Now Mired in Politics.”  Tell that to Justice Kavanaugh.

One senator asked Judge Ketanji Brown Jackson, President Biden’s Supreme Court pick, how religious she was “on a scale of 1 to 10.” Another asked her to define the word “woman.” A third wanted to know if babies are racist.

Interesting. Is Liptak actually mocking the idea that babies can be racist? That might anger Ibram X. Kendi, who wrote the children’s book Anti-Racist Baby, referred to by Sen. Ted Cruz during his questioning of Jackson. Jackson’s wacky opinions are respected at the Times.

The questioning this week has been different and marked by increasing partisan warfare, with Republicans seizing the chance to introduce conservative grievances they intend to press in the midterm elections, including opposition to critical race theory and transgender women in sports.

Times reporters live monitoring the third and final day of committee questioning of Jackson were defensive on her behalf and contemptuous of Republican questioning. (This less than four years after the Brett Kavanaugh hearings.)

Judge Jackson’s allies in the White House think she ran the gauntlet of Republican attacks without incurring too much damage. They are passing around a Gallup poll showing her with sky-high public support. But the enduring image of the day will be the succession of Republican senators angrily lecturing and interrupting a jurist who will likely never have to abide that kind of interruption, if she gets her next job.

Charlie Savage brought in the heavy guns in her defense Wednesday:

Senator Blackburn cycled back through a series of quotes she has spent the last few days using as ammunition to blast Judge Jackson, often by taking them out of context to present in a dark light. Here’s an article about some of that. And here’s another.

The Times barely grazed the fact that Judge Jackson refused to define what a woman is (despite all the press hailing of Jackson as the first black woman nominated to the Supreme Court). Reporter Jonathan Weisman’s take focused on Republican “outrage,” not Jackson skipping a basic biology question.

….Senator Marsha Blackburn, Republican of Tennessee, added another social issue to the list of cultural grievances the G.O.P. is foisting upon her in her confirmation hearings: gender -- specifically, what makes a woman a woman.

As she and other judicial nominees before her have done regularly, Judge Jackson dodged the question as outside of her role on the bench, saying, “I’m not a biologist.”

Weisman harrumphed: “A discussion of stare decisis this was not.”