Summing up Day Two of Supreme Court hearings for Ketanji Brown Jackson, the New York Times accused Republicans on the Senate Judiciary Committee of appeals to racism in Wednesday’s front-page “news analysis,” “Judging a Judge on Race and Crime, G.O.P. Plays to Base and Fringe.”

After all of the entreaties from top Republicans to show respect at Judge Ketanji Brown Jackson’s confirmation hearings, Senator Ted Cruz on Tuesday afternoon chose to grill the first Black woman nominated for the Supreme Court on her views on critical race theory and insinuate that she was soft on child sexual abuse.

The Times tried hard to make Sen. Ted Cruz (a Hispanic) into an anti-black racist, with this text featured on the front page: 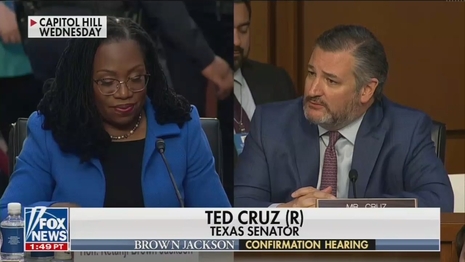 The message from the Texas Republican seemed clear: A Black woman vying for a lifetime appointment on the highest court in the land would, Mr. Cruz suggested, coddle criminals, go easy on pedophiles and subject white people to the view that they were, by nature, oppressors.

The attack, the most dramatic of several launched from inside and outside the Senate Judiciary Committee’s hearing room, contained barely coded appeals to racism and clear nods to the fringes of the conservative world….

But central to the Republican message was the “soft on crime” aspersion, a line of attack that raised the specter of criminal defendants -- many of them Black -- coddled by a liberal justice system that they suggested Judge Jackson embodied.

Along similar lines, Republicans contended that the nominee had been especially lenient on purveyors of child sexual abuse imagery, a claim that spoke to a fixation of those wedded to the QAnon conspiracy theory. Many of its followers -- some of whom took note online of the Republican line of questioning at the hearings -- falsely believe that former President Donald J. Trump is fighting a cabal of elites including top Democrats who are in fact child traffickers and pedophiles.

Allegations of being soft on crime have been a standard line of attack from Republicans against Democrats’ judicial nominees and candidates since at least the Nixon era, political scientists said. They are part of a strain of criticism that Black public servants in particular have come to expect, said Justin Hansford, a Howard University law professor and the executive director of the Thurgood Marshall Civil Rights Center. “It is a dog whistle, and it plays to a certain audience,” he said.

Thurgood Marshall, the nation’s first Black Supreme Court justice, faced similarly coded language during his confirmation hearing 55 years ago, when a group of fervently segregationist senators tried to stir fear over clashes between civil rights protesters and the police, as well as crime on American streets.

By making the leniency allegations [regarding child sexual abuse], Mr. Cruz, Ms. Blackburn and Mr. Hawley appeared to be exploiting echoes of QAnon, which has a broad, almost cultlike reach among some members of the Republican base….