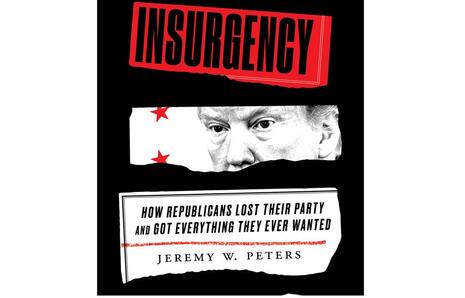 He sees no reason for Fox News to exist, perhaps because he denies the very reason it’s doing so well: The rest of the press can’t be trusted to cover Republicans fairly. Throughout Insurgency Peters eschews the term “liberal media,” which only appears once in quoted material. The most he can say is that Republicans believed the mainstream was “weak in the knees” over Obama. Yep.

Elsewhere he betrays his own place on the left end of the political spectrum. Race-baiter (and MSNBC host!) Al Sharpton is a “civil rights leader,” but Peters criticizes Glenn Beck up and down, while Newt Gingrich is “windy” “self-important.” He attacks Fox News host Sean Hannity multiple times for his closeness to Trump, noting ominously that “intentional use of repetition was a tactic of skilled propagandists.” (Like…Hitler!)

Speaking of partisan hosts, there’s nothing here about Rachel Maddow’s breathless years-long hyping of Russian “collusion” that came to nothing.

But when sex-related accusations are hurled against Republicans, it’s the content of the accusations and the Republican reaction that are disturbing. Peters described “chilling” accusations against Supreme Court nominee Brett Kavanaugh. Kavanaugh reacted to Christine Blasey Ford’s unsubstantiated assault charges by “erupt[ing] in a Trumpian torrent of resentment and rage.”

Peters was unsympathetic and impatient with three women who had even more chilling, and substantiated, stories about Bill Clinton’s sexual behavior. Peters huffed that even Trump allies found it “beyond the pale” to reintroduce Clinton accusers Flowers, Paula Jones, and Juanita Broaddrick accusers “to the public after so long,” during a presidential debate between Trump and Hillary Clinton. Jones settled a sexual harassment suit with Bill Clinton, and Broaddrick credibly accused the-then Arkansas attorney general of rape.

Peters cried that “none of the women…would express toward Trump any of the disgust they reserved for Bill and Hillary Clinton.” (Which makes perfect sense, if Clinton did what they accuse him of and if his wife really did threaten them.)

He seethed, “In the history of modern presidential campaigns, no candidate has pulled off such a ruthless act of vengeance in public” and lamented how Breitbart and the Trump campaign had “forced the rest of the media to cover the spectacle they created.”

Isn't that an admission that the liberal press would never have brought up the allegations against Bill Clinton on their own?

Peters hailed the phrase “Black Lives Matter” as if there is no difference between that “incontestable” axiom and the actual ideological Marxist entity called Black Lives Matter, its highly controversial founders, and its left-wing views regarding property rights, crime, Israel, and bailing out would-be assassins.

Insurgency’s acknowledgements page is revealing. Peters thanks Jane Mayer and Brian Stelter, among many other media elites, as well as the “incredibly dedicated professionals at MSNBC” and praised the Morning Joe team (Scarborough and NBC’s Andrea Mitchell provided blurbs for the book). This after writing an entire book running down that liberal cable network’s conservative rival Fox News. Insurgency is more evidence Peters can’t be trusted to treat conservatives fairly.