NY Times Skips Sotomayor’s WHOPPER About 100,000 Kids with COVID, 'Many on Ventilators' 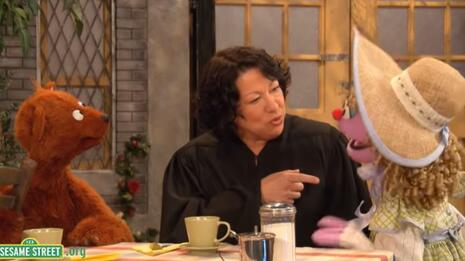 But Liptak’s 1,500-word back and forth included not a single sentence about an appalling piece of Covid disinformation, offered as fact during Friday’s oral arguments, by Obama appointee Justice Sonia Sotomayor. Arguing in favor of the need for the mandates, Sotomayor claimed “We have over 100,000 children, which we have never had before in serious condition and many on ventilators.”

That's not even close to factual. The actual seven-day average figure of under 18-year-olds hospitalized with Covid is currently under 800. Sotomayor also stated falsely that “Omicron is as deadly and causes as much serious disease in the unvaccinated as Delta did.” It’s a particularly galling omission by the Times, hypersensitive to so-called conservative misinformation.

By its silence, the Times is only following along with the network evening news programs in suppressing Sotomayor’s gross Covid falsehoods.

Where is their "fact checker" Linda Qiu? Maybe she's exhausted from a series of January 6 misinformation checks. Even Qiu's previous employer PolitiFact, historically reluctant to call out liberals, was compelled to rebut Sotomayor’s gaffe about the number of children with severe Covid.

WASHINGTON -- The Supreme Court’s conservative majority seemed to be leaning on Friday toward blocking one of the White House’s main pandemic-fighting strategies, expressing skepticism that the Biden administration has the legal power to mandate that large employers require workers to be vaccinated or to undergo frequent testing.

The oral argument over that mandate, which rocketed to the court on an emergency basis after a flurry of legal challenges around the nation from Republican-led states, business groups and others, raised the prospect that the court might deal a severe blow to the Biden administration’s efforts to address the coronavirus as the highly transmissible Omicron variant continues to spread.

The court’s three more liberal justices said the mandate was a needed response to the public health crisis.

Interestingly, of those three liberal justices (Kagan, Breyer, Sotomayor), Sotomayor was the only one he didn’t quote, while Kagan was quoted repeatedly. Liptak’s description of Sotomayor shows she is the most Covid-cautious of the justices.

Some of the participants in the arguments were missing from the courtroom, probably because of the pandemic. Justice Sonia Sotomayor, who has diabetes and had been the only member of the court to wear a mask since the justices returned to the courtroom in October, participated remotely from her chambers.