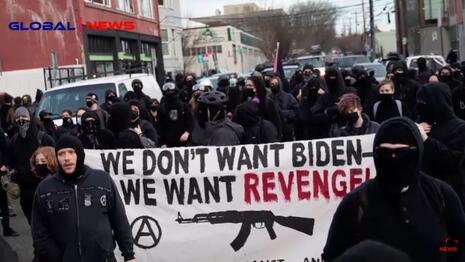 Portland, Oregon has endured rioting, vandalism, and assaults in its downtown area for months on end. So, after uncovering evidence that federal agents tried to track and punish such activity, the New York Times came down hard -- not on the rioters, but the FBI itself, on Thursday’s front page, co-written by Seattle bureau chief Mike Baker: “The F.B.I. Deployed Surveillance Teams Inside Portland Protests.”

In the hours after President Biden’s inauguration this year, protesters marched once again through the streets of Portland, Ore., sending a message that putting a Democrat in the White House would not resolve their problems with a system of policing and corporate wealth that they saw as fundamentally unfair.

The reporters tried to euphemize the orchestrated violence.

“No cops, no prisons, total abolition,” they chanted. Some of the activists, dressed in the trademark uniform of solid black clothing and masks that often signals a readiness to make trouble without being readily identifiable, smashed windows at the local Democratic Party headquarters.

The event -- like others that had consumed the city since the murder of George Floyd by a police officer in Minneapolis in 2020 -- included a variety of anarchists, antifascists, communists and racial justice activists. But there were others mingling in the crowd that day: plainclothes agents from the Federal Bureau of Investigation.

The F.B.I. set up extensive surveillance operations inside Portland’s protest movement, according to documents obtained by The New York Times and current and former federal officials, with agents standing shoulder to shoulder with activists, tailing vandalism suspects to guide the local police toward arrests and furtively videotaping inside one of the country’s most active domestic protest movements.

The Times found this is a bad thing. Fox News host Tucker Carlson has been lambasted by the media including the Times for his outlandish theories concerning the January 6 riots, including charging that FBI informants were among the mob. Now the Times is criticizing federal infiltration within a violent left-wing movement.

The breadth of F.B.I. involvement in Portland and other cities where federal teams were deployed at street protests became a point of concern for some within the bureau and the Justice Department who worried that it could undermine the First Amendment right to protest against the government, according to two officials familiar with the discussions.

After years of siccing Big Tech and social media on conservative groups in the name of fighting Covid disinformation and anti-trans hate speech, the Times cares about the First Amendment again, when it can be “weaponized” to protect the country’s far-left flank.

The paper had to admit FBI informants regularly infiltrate right-wing groups and admitted of the January 6 riot, “the F.B.I. did have an informant in the crowd that day.”

This sounded like a newspaper teaming up with left-wing groups to get the government to back off politically inconvenient surveillance:

But organizers of the protests and civil rights groups, after being told of The Times’s findings, said that surveillance agents recording and following protesters in the midst of a demonstration was a form of domestic spying.

Those [right-wing] investigations have sometimes involved confidential informants and surveillance. But no other evidence has emerged that F.B.I. agents in recent years had blended into crowds engaged in political protests in the streets.

A Times lead story from July 2020 noted the violent chaos in Portland, only to fiercely protest federal intervention while suggesting “fascism” was in play: “To City’s Alarm, Federal Officers Police Portland -- ‘It Feels Like Fascism’ -- Accusations of Exceeding Their Authority and Violating Rights."