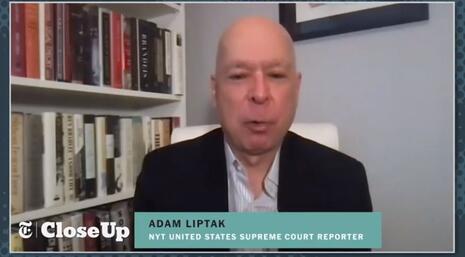 New York Times Supreme Court reporter Adam Liptak is once again suggesting that the court must uphold the (constitutionally non-existent) right to abortion if it wishes to maintain credibility with the public (although abortion isn’t actually popular with the public) in Tuesday’s “With Roe at Risk, Justices Explore a New Way to Question Precedents.”

Liptak is alarmed at what the subhead describes as "looking to what the lawyers had argued in assessing whether to follow a precedent," and not just the reasoning of the justices themselves. His sympathy for the bad ruling (the late, liberal Justice Ruth Bader Ginsburg also criticized it) was evident in his consolatory opening.

Roe v. Wade has had a rough two weeks at the Supreme Court.

On Dec. 1, at arguments over its fate in a case from Mississippi, the five most conservative justices showed no interest in doing anything short of overruling it.

A decision in the Mississippi case is not expected until late June. If the court overrules Roe, an increasingly real possibility, it will have to explain why it is departing from the principle of stare decisis, which is legal Latin for “to stand by things decided.”

At his 2005 confirmation hearings, Chief Justice John G. Roberts Jr. said the Supreme Court should be wary of overturning precedents, in part because doing so threatens the court’s legitimacy.

[Roberts] suggested that the fetal-viability line established in Roe was not a crucial part of the decision’s reasoning. “Was viability an issue in the case?” he asked. “I know it wasn’t briefed or argued.”

In shifting the focus from what the court had done to what the parties in the case had asked it to do, the chief justice was trying to justify upholding a 15-week line while stopping short of overruling Roe entirely, which would allow states to make all abortions illegal.

Whatever his goal, though, shifting the analysis from the words of the opinion to the advocacy that gave rise to it is a recent development and yet another way to undermine precedents.

The reporter found a journal article to back up his concerns.

Richard J. Lazarus, a law professor at Harvard, explored this mode of argument in a recent article in The Supreme Court Review called “Advocacy History in the Supreme Court.”

Chief Justice Roberts’s question seemed to go further, suggesting that the meaning and weight of a decision may turn on the arguments that had been presented to the court.

Professor Lazarus said that it was one thing to look at the litigation history of a Supreme Court decision to understand it better and another to give it more or less precedential weight depending on what the lawyers had or had not argued.

Chief Justice Roberts’s question about Roe was in a sense irrelevant, as the significance of fetal viability had been thoroughly argued in Planned Parenthood v. Casey, the 1992 decision that reaffirmed Roe’s core holding.

That made Roe a “super-duper precedent,” Senator Arlen Specter of Pennsylvania said at Chief Justice Roberts’s confirmation hearings. The chief justice did not adopt Mr. Specter’s terminology, but he did not quarrel with the senator’s larger point.