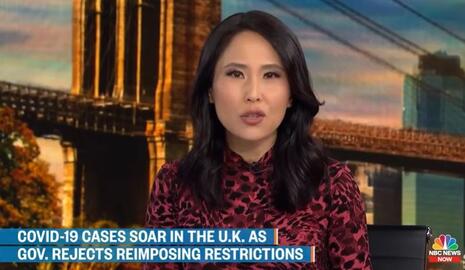 The New York Times has long lit into Boris Johnson and his Conservative government in the United Kingdom over its response to the coronavirus pandemic. But Josh Holder’s hit in the Sunday edition may turn out embarrassing: “Children Drive Britain’s Longest-Running Covid Surge.”

Holder strongly hinted that Johnson’s reckless insistence that life return to normal this summer (no masks!) is to blame for the state of the coronavirus now.

Britain is once again at the peak of a coronavirus surge, just over three months after all coronavirus restrictions were lifted on what Prime Minister Boris Johnson hailed as “Freedom Day.”

Cases have stayed at high levels since then, with more than 20,000 new cases recorded each day. There are almost 9,000 Britons hospitalized with Covid-19 -- the highest level since March, when the United Kingdom was in the midst of a long national lockdown.

He quoted professor Tim Spector: “The trouble is that the government has gone from ‘operation fear’ that we had a year ago to ‘operation complacency.”

(As a recent visitor to England, I can confirm that the mostly mask-less citizenry have pretty much gotten on with their lives.)

The Times as usual worked hard to condemn any region that threatens to get on with life without that guarantor of perfect health, the disposable cotton mask:

England has some of the loosest coronavirus protections in Europe since July 19, when it lifted all legal restrictions, including mandatory mask-wearing. In a recent survey by YouGov and Imperial College London, 21 percent of Britons said they rarely or never wear a face mask in public -- about four times as many as in Italy and Spain.

He also blamed the UK for not vaccinating children fast enough, without mentioning legitimate risk questions regarding side effects like myocartidis, or the fact that children are generally not affected by the virus.

The current surge is being primarily driven by high levels of infection in school-age children….

Unlike most of Europe, the U.K. was slow to approve vaccines for adolescents. The recommendation of a single dose of the Pfizer-BioNTech vaccine for 12- to 15-year-olds was not announced until mid-September -- weeks after many students had returned to school from summer vacation. So far, just 21 percent of 12- to 15-year-olds are vaccinated in England, compared with 80 percent of adults.

Professor Christina Pagel, the director of the Clinical Operational Research Unit at University College London, said that the lag in approval of vaccines for 12- to 15-year-olds was an enormous mistake.

Somehow, case spikes in Europe will also be blamed on the United Kingdom.

The U.K.’s high case rates had been an outlier in Western Europe in recent weeks, as infections in France, Germany and Spain all plateaued at low levels. But rising cases in Germany hint that Britain’s woes could spread across the continent this winter, with fears that waning immunity and increased indoor mixing will fuel further infection.

Perhaps spying the latest actual case data, Holder covered himself near the end.

Case rates have fallen in the U.K. in the past few days, although it remains to be seen whether this trend will continue once children return to school next week after a mid-semester break. Professor Pagel said she hoped the brief vacation from school would serve as a break in transmission….

The timing may turn out embarrassing to the Times, given that on the very morning this story ran, average Covid cases in the United Kingdom were actually flat over the last two weeks over all – the graph showing a rise and then rapid fall that may augur a sustained decline, not a "surge."