NY Times: ‘Far-Right’ Larry Elder ‘All That Is Wrong With the Recall Process’ in California 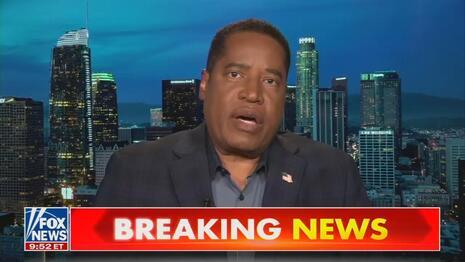 The New York Times is horrified that black conservative radio host Larry Elder could become the next governor of California, if sitting Democratic Gov. Gavin Newsom loses his bid to avoid being recalled. Check out the panicky front-page headline from Wednesday morning’s edition: “A Fixture of Right-Wing Radio Could Soon Govern California.”

How Did Larry Elder Become a Front-Runner in California’s Governor Race?

Mr. Elder, a conservative radio host who paints himself as the native son of a simpler and safer California, has drawn criticism from Democrats and Republicans alike.

Well, those Republican critics are his election rivals, so it’s no surprise they’d grab on to any criticism of Elder, who is leading the pack of potential Newsom replacements. It almost sounds like the Times thinks no conservative should be a front-runner in a blue state, like someone isn't getting their instructions from the Times and other liberal providers of wisdom.

Sacramento-based correspondent Shawn Hubler discredited the very idea of recall elections, while for the second time in a week smearing Elder.

For a generation, Larry Elder has been an AM radio fixture for millions of Californians, the voice they could count on when they were fed up with liberal Democratic politics. Undocumented immigrants? Deport them. Affirmative action? End it. Equal pay? The glass ceiling doesn’t exist.

Now Mr. Elder, a Los Angeles Republican who bills himself as “the sage from South Central,” could end up as the next governor of the nation’s most populous state....

Hubler betrayed nothing about Gov. Newsom, who is suffering a backlash fueled by his harmful lockdown policies and hypocritical stance on Covid restrictions. She tried her best to describe Elder as a dreadful interloper:

Fueled by a combination of arcane recall rules, name recognition and partisan desperation, his rise to the top of a pack of some four dozen challengers has stunned and unnerved many in both parties.

Democrats call him the agent of a far-right power grab. Republican rivals say he is an inexperienced, debate-dodging opportunist. Orrin Heatlie, the retired sheriff’s sergeant who is the recall’s lead proponent, said he and his fellow activists were voting for someone else.

She indulged in personal attacks and speculation in a way that under-substantiated allegations made against Democrats never get (see: Tara Reade).

This month, The Sacramento Bee and two Republican candidates -- Kevin Faulconer, the former San Diego mayor, and Caitlyn Jenner, the television personality and former Olympian -- demanded that Mr. Elder drop out of the race after an ex-girlfriend of his said he brandished a gun at her while high on marijuana during a 2015 breakup.

This line gave the game away:

Constitutional scholars say Mr. Elder’s sudden ascent is an example of all that is wrong with the recall process, which requires a majority to recall a governor but only a plurality of votes for the replacement candidate to win.

Mr. Elder’s political positions speak loudly and clearly to the state’s small but vocal strain of far-right conservatism. He supports school vouchers and prioritizes jobs over environmental and climate considerations. He opposes abortion. He is vaccinated against the coronavirus because of a rare blood condition but opposes vaccine and mask “mandates.”

Why is “mandate” in scare quotes?

But establishment Republicans such as Mr. Faulconer say he is more suited to provocation than to governing.

Besides the personal allegations, Hubler also dug up 20-year-old nothings.

He has recanted assertions made in 2008 that climate change is “a crock” but, in an interview, offered $10,000 to charity for proof he had ever said that and falsely claimed that “nobody really knows to what degree” humans caused climate change. He has written that Democrats do better with female voters because, according to academic research, “women know less than men about political issues.”

And indeed, that’s precisely what the abstract of the linked journal article “Women and Political Knowledge During the 2000 Primaries” says (relevant links retained above). Should the female author of that article be cancelled as well?