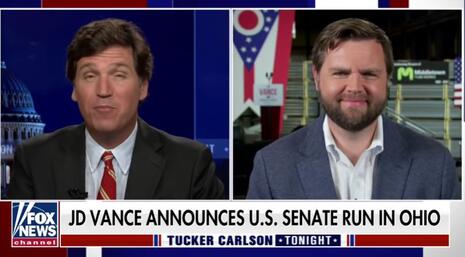 It’s the paper’s latest poorly aimed blast at Vance, author of the acclaimed best-seller Hillbilly Elegy, a moving chronicle of his life, from growing up poor in Ohio to Yale Law School. The left distrusted the book’s emphasis on family stability and its thesis that poor whites were also victims of the elites. Now that Vance has moved rightward and may become a U.S. Senator, the attacks have become truly vicious, with the Times leading the pile-on of falsehoods.

The online photo caption sounded off, coming from the Times: “J.D. Vance no longer speaks of the working class’s problems as self-inflicted, instead adopting the grievances of former President Donald J. Trump against ‘elites.’” Would the liberal paper truly welcome a politician who blamed poor people for their own problems?

Before he was a celebrity supporter of Donald J. Trump’s, J.D. Vance was one of his most celebrated critics.

“Hillbilly Elegy,” Mr. Vance’s searing 2016 memoir of growing up poor in Ohio and Kentucky, offered perplexed and alarmed Democrats, and not a few Republicans, an explanation for Mr. Trump’s appeal to an angry core of white, working-class Americans.

A conservative author, venture capitalist and graduate of Yale Law School, Mr. Vance presented himself as a teller of hard truths, writing personally about the toll of drugs and violence, a bias against education, and a dependence on welfare. Rather than blaming outsiders, he scolded his community….

Today, as Mr. Vance pursues the Republican nomination for an open Senate seat in Ohio, he has performed a whiplash-inducing conversion to Trumpism, in which he no longer emphasizes that white working-class problems are self-inflicted. Adopting the grievances of the former president, he denounces “elites and the ruling class” for “robbing us blind,” as he said in his announcement speech last month.

Interesting wording above. Does Gabriel himself think that “white working-class problems are self-inflicted,” as opposed to the problems of other racial categories?

Now championing the hard-right messages that animate the Make America Great Again base, Mr. Vance has deleted inconvenient tweets, renounced his old views about immigration and trade, and gone from a regular guest on CNN to a regular on “Tucker Carlson,” echoing the Fox News host’s racially charged insults of immigrants as “dirty.”

Wrong. This is at least the second time the Times has used the same Cleveland Plain Dealer anti-Vance hit piece, which quoted brief bits from Vance’s speech. In the story, Vance is quoted saying “dirty” once, while encapsulating the concerns of a local woman.

Mr. Vance’s adherence to some of the most extreme views of Trump supporters shows how the former president, despite losing the White House and Congress for his party, retains the support of fanatically loyal voters, who echo his resentments and disinformation and force most Republican candidates to bend a knee.

Gabriel is apparently annoyed with Vance for no longer genuflecting to the “elites,” picking anti-journalistic fights with Vance ever step of the way.

“He has been consistent in being able to diagnose the anxieties of Trump’s base economically almost better than anyone else,” Mr. Kirk said in an interview. Although Mr. Vance once mocked Mr. Trump’s position that a southwest border wall would bring back “all of these steel mill jobs,” today he supports the “America First” agenda that reducing legal immigration will increase blue-collar wages, a link that many economists dispute….

Then came the snide remarks.

Mr. Vance declined to be interviewed for this article. But an examination of his embrace of Trumpism through the ample record of his writings and remarks, as well as interviews with people close to him, show that it happened the way a Hemingway character famously described how he went bankrupt: “Gradually, and then suddenly.”