An embarrassingly fulsome tribute to the lesbian, gay, bisexual, transgender and queer movement on Tuesday extended the New York Times’ outsized attention to a minority group that defines itself based on sexuality: “They Came to Slay: L.G.B.T.Q. Trailblazers,” composed of interviews with five “L.G.B.T.Q. people of color.”

Leftist L.G.B.T.Q. advocacy has long infiltrated the paper’s cultural sections and has also established footholds in the paper’s purported news pages. The full-page feature brings a definite “Yas Queen” vibe to the Times news pages. It was written by Derrick Bryson Taylor, with photos by Richard Williams:

L.G.B.T.Q. people unite every June, Pride Month, to celebrate milestones like the Stonewall uprising and the activists who have made significant contributions to the advancement of gay rights.

Often overlooked, however, are the unsung heroes of color who have broken ground and continue to make strides. In a year when at least 29 transgender or gender-nonconforming people have been killed, and as states are moving to restrict the participation of transgender women and girls in sports, Black L.G.B.T.Q. artists, performers, entrepreneurs and designers are using their talents to protect and heal, as they have for years.

The link above goes to the highly ideological Human Rights Campaign. 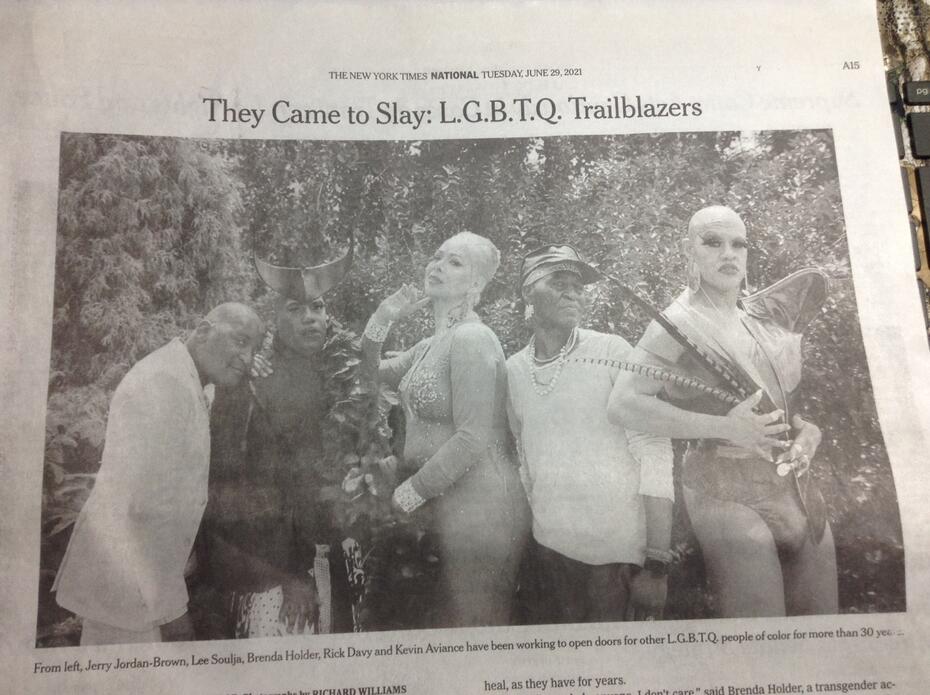 Without any other information, that “29” figure seems rather meaningless on a national scale, and the attempt to conflation tragic killings with state attempts to protect girls in sports is offensive.

The text is also misleading: No one is trying to “restrict the participation of transgender women and girls in sports,” but some states are trying to pass legislation protecting female athletes from having their sports and locker rooms overrun my biological males.

Incidentally, the Times has been calling transgenders “heroic” since at least 2018. Will the paper use that same honorable term on the Fourth of July, when the nation remember truly historic American heroes?

“I’m willing to help anyone, I don’t care,” said Brenda Holder, a transgender activist and celebrated ballroom performer. “Because of the struggles and the trials and tribulations that I went through, I won’t let anyone else go through it.”

Ms. Holder is not alone in the effort to help L.G.B.T.Q. people. She and four others featured here have been working for decades to open doors through their art, activism, entrepreneurship and mentorship. Collectively, they have created a legacy of empowerment.

Here are their stories.

The Times began with Kevin Aviance, who in 1994 had a cameo in a Madonna video. The conclusion was equally inspiring:

Well, I guess some heroes do constantly refer to themselves in the third person…

The quote on the second feature, on fashion designer Rick Davy, seems ironic:

We want to showcase L.G.B.T.Q. designers because the spotlight is not always put on them.

It is in the New York Times.