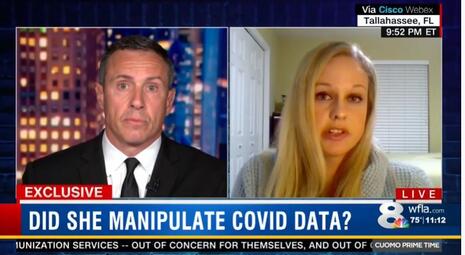 A New York Times “Covid News” update by Isabella Grullón Paz posted Friday reported that Florida will become the first state to no longer update its COVID-19 dashboard and cease its daily reporting on cases, deaths and vaccinations. With cases decreasing in the state, it will post weekly updates instead.

But then Paz went into a bizarre sidelight on discredited Florida Covid "whistleblower" Rebekah Jones, a heroine to the left for her allegations of COVID coverup by Florida’s Republican Gov. Ron DeSantis.

Jones was recently thrust back in the news by a Florida health department’s Inspector General letter indicating that she met the criteria for whistleblower protections.

Florida’s dashboard was created in part by Rebekah D. Jones, a state data scientist who was fired for insubordination in May 2020, a conflict that she said came to a head when she refused to manipulate data to show that rural counties were ready to reopen from coronavirus lockdowns. The data in fact showed that the virus was rapidly spreading in a state that was hesitant to mandate broad restrictions and eager to reopen.

The Times’ own figures on excess deaths by state during 2020, as demonstrated in a related article, show Florida to be on the better side of normal range. So where do Jones’s fans think Florida is hiding the dead bodies?

Ms. Jones’s firing became a flash point as Mr. DeSantis, a close ally of then-President Donald J. Trump, touted Florida’s early success in battling the virus -- a victory lap that turned out to be premature at the time and led to a disastrous summer. State officials insisted that her claims about hiding virus data were false....

After Ms. Jones was fired, she made her own database using public virus case records from the Florida Department of Health that had been buried deep in PDF files on the state website.

In December, state police agents with guns drawn raided Ms. Jones’s home in Tallahassee to execute a search warrant in a criminal investigation, after police said a breach at the Florida Department of Health was traced to her computer. She denied having anything to do with the breach.

Ms. Jones’s dashboard generally shows a higher number of cases than the number reported by the state. It also includes information from other agencies, such as hospitalization rates from the Agency for Health Care Administration, that are not on the state dashboard.

Grullon Paz revealed nothing about Jones' history of arrests or truly disturbing accusations of cyberstalking a former boyfriend. Even Jones’ supposedly scientific measurements were based on discredited assumptions about antibodies, as the New York Times reluctantly admitted deep into a loaded anti-DeSantis story: “Her dashboard shows a higher total number of cases than the state’s official records because it includes the number of positive antibody tests, something the Department of Health and outside epidemiologists do not recommend.”

It’s no surprise this Times reporter would cheerlead for a hopeless leftist cause like Jones’s, given that as a college student journalist in 2018 she warned "Political thought is taking determined -- and far -- steps to the right, and the left cannot continue to ignore that its happy-go-lucky mentality is failing to resonate with powerful pockets of society. Progress is officially hanging by a thread."

Another quibble: The Times keeps calling Jones a scientist. She’s actually a geographic information systems manager, or “data manager,” as the paper has previously reported, before mysteriously promoting her.

The paper also has yet to cover the devastating expose of Jones by Charles Cooke at National Review, a thorough debunking of Jones’ history of bizarre claims that should give fair-minded readers sufficient warning. For one, Cooke revealed that Jones had no access to the raw data she claimed to have been ordered to manipulate.