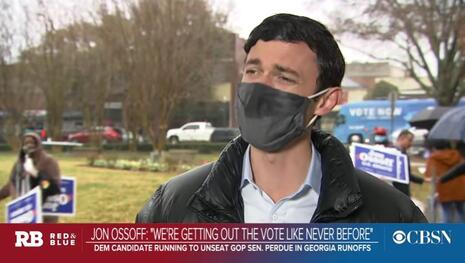 The New York Times is still carrying a torch for failed 2017 Democratic congressional candidate Jon Ossoff, so young, so photogenic, so liberal. He faces Republican Sen. David Perdue in a January 6 runoff for a vital seat in Georgia.

They led the paper's National section with the headline: “The ‘Resistance’ Formed Because of Trump, With an Assist From Jon Ossoff.”

In early 2017, Angelika Kausche was frustrated, demoralized and looking for somewhere -- or someone -- to help her channel the rage she had recently expressed at the Women’s March.

Then Jon Ossoff appeared. A political newcomer, he announced his congressional bid two weeks before President Trump’s inauguration. He seemed even younger than his 29 years, dressed in suits that might have fit him on his high school graduation day. Liberal mothers in the Georgia suburbs joked that he would make a dream son-in-law, but they settled on him as a symbol of the growing Democratic resistance to the Trump administration.

But soon she was joining other suburban women volunteering for Mr. Ossoff’s special election campaign, spending nearly every day organizing her precinct, knocking on doors and planning events in the special election in Georgia’s Sixth Congressional District to replace Tom Price, after he was tapped by Mr. Trump to be secretary of health and human services.

Now, nearly four years later, Ms. Kausche has been involved with Mr. Ossoff’s subsequent campaigns -- and several of her own.

“I always tell Jon, it’s all his fault,” said Ms. Kausche, who flipped her traditionally red suburban district when she won a seat in the Georgia House of Representatives in 2018. “Knocking doors for Jon felt like I was doing something to fight back, and in the process, people like me learned how to campaign.”

Ms. Snow-Murphy, now the executive administrator of a local organization focused on keeping the Sixth District in Democratic hands, recently presented Mr. Ossoff with a gift: a hammock embroidered with the words “thanks for building the base camp.”

The present was meant to underscore how much Mr. Ossoff’s campaign had helped build the Democratic infrastructure that flipped Georgia. But it also spoke to what had changed for her and her fellow suburban activists -- a hammock, an accessory for backyard leisure time, presented to the man they say changed how they spend their own leisure time. Or, rather, who seriously cut into it.