The New York Times put its rank anti-anti-communism in a 3,000-word explainer on the front page of the Sunday Business section. Reporters Amy Qin, Vivian Wang, and Danny Hakim produced a pathetic attack on critics of the Chinese Communist Party: “Partners in Misinformation – The American far right and critics of China are pushing unsubstantiated pandemic claims.” The online subhead: “Steve Bannon and a fugitive Chinese billionaire see an opportunity to push their agendas.” Bannon is the former Trump advisor, and the billionaire is Guo Wengui.

The expose centered on Hong Kong researcher Dr. Li-Meng Yan, making the rounds of right-leaning media speaking out against China’s despicable and dangerous lack of virus response in early 2020. 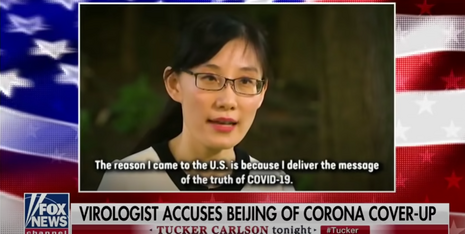 By September, Dr. Yan had abandoned caution. She appeared in the United States on Fox News making the unsubstantiated claim to millions that the coronavirus was a bio-weapon manufactured by China.

Overnight, Dr. Yan became a right-wing media sensation, with top advisers to President Trump and conservative pundits hailing her as a hero. Nearly as quickly, her interview was labeled on social media as containing “false information,” while scientists rejected her research as a polemic dressed up in jargon.

Her evolution was the product of a collaboration between two separate but increasingly allied groups that peddle misinformation: a small but active corner of the Chinese diaspora and the highly influential far right in the United States.

Each saw an opportunity in the pandemic to push its agenda. For the diaspora, Dr. Yan and her unfounded claims provided a cudgel for those intent on bringing down China’s government. For American conservatives, they played to rising anti-Chinese sentiment and distracted from the Trump administration’s bungled handling of the outbreak.

The Times could have written “rising anti-Communist” or “rising anti-totalitarian” sentiment, but they intend to smear conservatives as cynical bigots.

Both sides took advantage of the dearth of information coming out of China, where the government has refused to share samples of the virus and has resisted a transparent, independent investigation. Its initial cover-up of the outbreak has further fueled suspicion about the origins of the virus.

That previous paragraph is about as tough as it got on Communist China. No mention of the virus lies and coverups, no mention of the late Dr. Li Wenliang, who warned his colleagues about the emerging virus but was told by the police to stop “making false comments.”

The media outlets that cater to the Chinese diaspora -- a jumble of independent websites, YouTube channels and Twitter accounts with anti-Beijing leanings -- have formed a fast-growing echo chamber for misinformation. With few reliable Chinese-language news sources to fact-check them, rumors can quickly harden into a distorted reality. Increasingly, they are feeding and being fed by far-right American media.

As the new year began, Mr. Wang was doing what he did best: attacking the Chinese Communist Party on YouTube. He railed against China’s crackdown on Muslims and pontificated on the U.S. trade war.

What’s so suspect about "railing" against China’s mistreatment of millions of Muslims? Sounds like something the paper would support. Does defending Communist China trump religious freedom at the Times? It seems to on the opinion page at least.

Mr. Bannon and Mr. Guo have been on a mission for years to, as they put it, bring down the Chinese Communist Party.

Only the Times could spin opposition to a totalitarian regime as a negative. The paper certainly won’t be helping out: The paper has notoriously swallowed CCP propaganda about the coronavirus since March 2020.

Mr. Bannon pivoted his podcast to the coronavirus. He was calling it “the C.C.P. virus” long before Mr. Trump started using xenophobic labels for the pandemic. He invited fierce critics of China to the show to discuss how the outbreak exemplified the global threat posed by the Chinese Communist Party.

The paper has also gone after The Epoch Times, which also dares to strongly criticize the Chinese Communist Party. Tech reporter Kevin Roose made a Sunday front page with a hit piece on the Falun Gong-associated newspaper: “How an Obscure Newspaper Became a Bullhorn for the Far Right.”

The Times itself never goes after the Chinese Communist Party with the same vigor as it reserves for critics of the CCP, not even when it’s covering the country’s mass detention of its Muslim Uighur population.