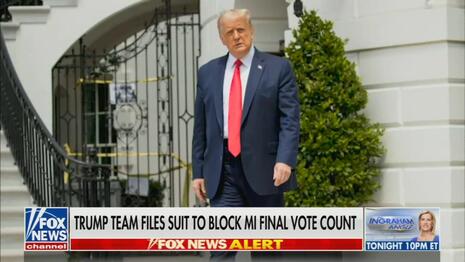 Check out this objective reporting from the lead paragraph:

It was an election where Republican charges of fictitious voter fraud took center stage before, during and after the count, backed by a barrage of lawsuits intent on making it harder to cast or tally votes.

Yet by its end, Americans had cast ballots at a rate not seen in a century. A Democrat was elected president. And Republicans drew surprising support from Black and Latino voters -- the very groups the party historically targeted with restrictive voting laws in state after state.

“Stereotypes die hard, and this Republican idea that if more people vote it benefits Democrats was at some level more true in the past,” said Norman Ornstein, a scholar of American politics and democracy at the conservative-leaning American Enterprise Institute. “It was certainly true when Republicans believed that white working-class voters were Democrats. But it’s a ridiculous stereotype now.”

In Wines’ world, there is no such thing as vote fraud. Again, remember sentences like the one in bold below appear in a so-called news story:

Mr. Ornstein is a relentless critic of Mr. Trump and the Republican Party’s increasingly authoritarian bent. And nobody expects party leaders to quickly abandon a strategy that has served its interests from North Carolina to Texas to North Dakota. Republicans have argued that measures like voter identification laws, purges of voter rolls and limits on mail ballots are necessary to combat fraud, but ballot fraud is so rare that the rules often accomplish little more than suppress legal turnout. Even so, such strategies have long been part of American politics and are not going away. 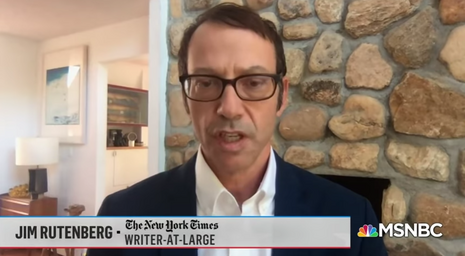 Monday’s front-page story, “Plan to Make Losing Look Like a Win,” by Jim Rutenberg and Nick Corasaniti, purported to outline a years-long conspiracy by the Trump camp to steal re-election if necessary.

Four years after Rutenberg's infamous front-page shenanigans in August 2016 calling for the press to drop its façade of objectivity to destroy the Trump candidacy, he is back on the front page trying to suggest the president was the one trying to “bend reality.”

Relaying an anecdote about controversy among Republican challengers in a vote counting room in Detroit, he made it a racial incident, using a surely objective choice as a source:

…. Like similar episodes in Las Vegas, Milwaukee, Philadelphia and Pittsburgh, the scene in Detroit was the culmination of a yearslong strategy by Mr. Trump to use the power of the executive branch, an army of lawyers, the echo chamber of conservative news media and the obedience of fellow Republicans to try out his most audacious exercise in bending reality: to turn losing into winning.
….

[Trump adviser Roger Stone] also hired a field general for his efforts to bring charges of voter fraud: an operative from Philadelphia named Mike Roman. Mr. Roman had achieved fame in conservative circles in 2008 for helping to push out video from a voting site in Philadelphia where two members of the New Black Panther Party were patrolling outside, one with a billy club, becoming a much disputed cause in conservative news media.

That story about voter intimidation by two members of the New Black Panther Party, one brandishing a nightstick, outside a polling place in Philadelphia, was reliably dismissed by the Times and other outlets. So much for caring about the security of the electoral process!