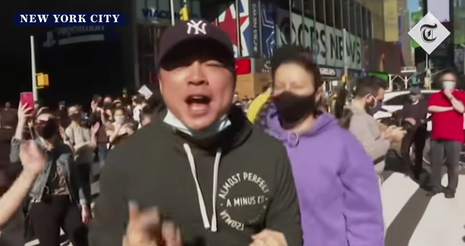 When Notre Dame football fans rushed the field after their team beat #1 Clemson in a college football double-overtime thriller on Saturday, portions of the press focused not on the game but lecturing the fans for their irresponsible behavior during the coronavirus pandemic. But Biden fans throwing nationwide block parties were apparently immune from the virus.

In the most precarious season of college football history, in which games have been canceled and spectators have been outright banned at some programs, it’s hard to think of a sight worse, as far as the COVID-19 pandemic goes, than what followed Notre Dame’s upset win over No. 1 Clemson.

As soon as Clemson’s last attempt to score in double overtime fell short, Notre Dame fans rushed the field as if their team wasn’t playing in a pandemic that reached a new peak this week in the United States.

This is the postgame sight that greeted college football fans as well as a nation waiting for a delayed post-election “Saturday Night Live”:

Baer paused to show a photo tweet from Yahoo! Sports showed the Notre Dame post-game crowd on the field. (And was our whole "nation" really that excited to see SNL, or just the liberal portion?)

…the coronavirus doesn’t care that they had reason to be excited. It remains dangerous, a virus that has killed more than 200,000 Americans and continues to spread at record rates….

Hopefully, Saturday’s game won’t be seen as a super-spreader event, but the field-stormers at Notre Dame -- as well as the school administrators that allowed them into the stadium with no evident plan to stop them from crowding -- certainly seem to have done the best they can to create one.

The lecture continued at USA Today.

The sobering realities of our daily case numbers didn't stop Notre Dame fans – mostly students by the look of it – from pouring onto the field after the No. 4 Fighting Irish staged one final stop in double-overtime to pull the upset on No. 1 Clemson at Notre Dame Stadium.

But as NewsBusters Curtis Houck has documented, not all mass gatherings are shamed as potential super-spreader events. You can join in a massive lefty block party for Joe Biden after his apparent victory over Donald Trump, and the networks will celebrate along with you, with very few discouraging words like “masks” or “virus.”

The New York Times wasn’t in the mood to spoil the mood of the pro-Biden partiers. Neither was USA Today, who lectured the Notre Dame field-rushers, going to hector the Biden throngs dancing in the streets.