NY Times Meltdown:‘Not Normal for a President to Employ...Racist and Sexist Attacks’ 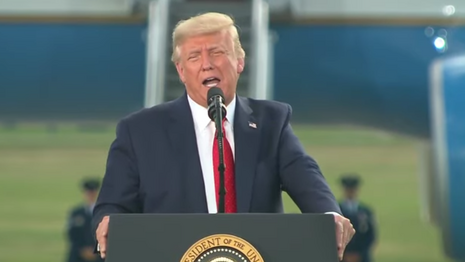 White House correspondent Peter Baker in particular has become openly contemptuous of the president and seems to have lost the ability to be objective about the man. Yet Baker was granted a half-page of text for his Tuesday “news analysis,” “Racist Attacks, Conspiracy Theories and War on the Post Office.”

Every line in this “news” story deserved its own highlight. Here are a few.

How many ways are there to say that this is not normal?

That it is not normal for a president to employ transparently racist and sexist attacks. Or pressure his attorney general to prosecute his foes with an election looming. Or resist money for the Postal Service in order to stop people from voting by mail. Or embrace a conspiracy theorist running for Congress. Or condemn American cities to “rot.”

President Trump, of course, long ago redefined what constitutes normal in the White House, but with 77 days left in a campaign that polls show he is losing, he is pushing all the boundaries at once. At the same time the champion of birtherism is again scraping the raw edges of America’s divisions over race, gender and national origin, he is propelling fringe ideas into mainstream conversation. And now, running as the incumbent, he has levers of power available to help salvage a flagging campaign.

As he began barnstorming battleground states on Monday to try to steal a little attention from the Democratic National Convention, Mr. Trump repeated his use of incendiary terms in attacking Senator Kamala Harris, the designated vice-presidential candidate. “She was nastier and meaner and more vicious than Pocahontas,” he said in Minnesota, throwing in as a twofer the racist slur he has used for Senator Elizabeth Warren of Massachusetts so often that no one really stops to protest anymore.

On the same day, the president played to old white fears by claiming on Twitter that “the ‘suburban housewife’ will be voting for me,” using a word more common in the 1970s than the 21st century, because if Mr. Biden wins he will force low-income housing into their communities “with Corey Booker in charge,” naming another Black senator (while misspelling his first name).

After his half-baked charges of racism against Trump, Baker took a paranoid turn:

Unlike in 2016, when Mr. Trump’s comments on Mexicans, Muslims, women, veterans and people with disabilities generated shock, his remarks now carry extra weight because he has the power of the federal government at his disposal.

Mr. Barr has already repeatedly taken actions advocated by Mr. Trump benefiting the president’s associates, including reducing a sentence recommendation against Roger J. Stone Jr. and moving to drop a case against Michael T. Flynn even after he pleaded guilty….

Earlier in his remarks, he boasted about having done an “incredible” job confronting the spread of the virus and falsely said Mr. Biden wanted to “lock all Americans in their basements for months on end, which would inflict permanent irreversible harm on our nation’s children, families health and economy.”

The text box underlined the supposedly serious accusation by Trump: “Accusing Biden of aiming to lock people in their basements.”

Any normal reader would grasp Trump is using the charge not literally, but as a metaphor for overreaching government reaction against individual freedoms during the coronavirus pandemic. It's something the big-government duo of Biden and Harris could well try to do, and something the Times would favor, judging by the horror the paper displayed when Southern states dared to restart their economies.