NY Times Sees Conservative 'Assault on Virus Orders,’ But No Label on ACLU 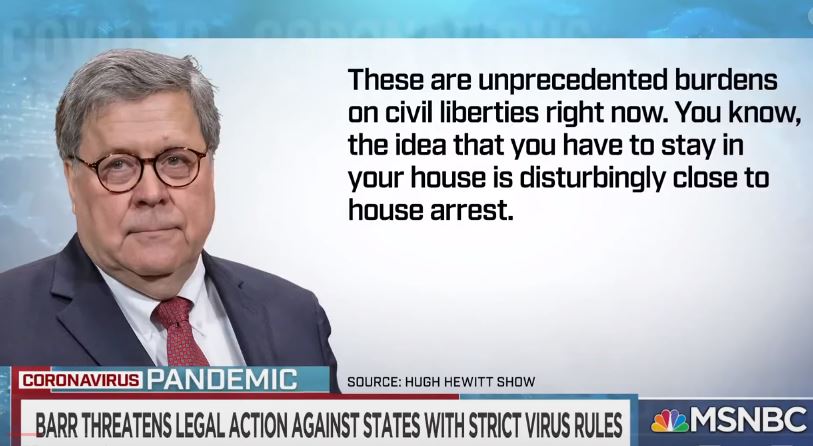 As some states take tentative steps towards resuming normal life, the New York Times on Thursday warned that Attorney General Bill Barr was getting into the debate on the side of fighting state restrictions on commerce and assembly. Reporters Lisa Lerer and Kenneth Vogel penned "Justice Dept. Signals Support for Fight Against Restrictions.” The text box set the hostile tone: “Conservative groups make an assault on virus orders.”

The neutral headline hid a stark labeling discrepancy dominated, as ten “conservative” labels to underline the concern readers were supposed to take, versus zero liberal ones -- this in a story that quotes the ACLU.

A network of conservative leaders, donors and organizations has launched a legal onslaught against state and local restrictions intended to slow the spread of the coronavirus, pushing to allow churches to hold services, businesses to reopen and people to be able to visit with family and friends.

They have been emboldened in recent days by increasing signs of support from a powerful ally: The Justice Department.

The head of the ACLU is revealed as a states’ rights advocate, a stand the Times has previously equated with Reaganite racism. Not anymore.

“It would not be the first time that the federal government has tried to undercut states’ rights by pushing its own agenda,” said Anthony Romero, the executive director of the American Civil Liberties Union, which has supported some challenges to coronavirus restrictions but is concerned that the federal government could take its own action against state and local rules.

An example of the labeling overkill: The paper managed to identify Tony Perkins both as “a leading Christian conservative ally of the president” and “the president of the Family Research Council, the conservative Christian policy group.” Meanwhile, no labels for the liberal ACLU, who also were not questioned about their hypocritical embrace of states’ rights.

But Mr. Romero of the American Civil Liberties Union said the potential involvement of the Justice Department risks muddling and politicizing what should be a nonpartisan push to protect civil liberties.

His group has taken legal action of its own challenging coronavirus restrictions in Rhode Island and Puerto Rico. But it has rejected requests to represent churches suing to overturn bans that it assessed as necessary and within states’ rights, Mr. Romero said....

Meanwhile, more labels for the other side:

As conservative lawyers push forward with their lawsuits, they said they did not expect Mr. Barr and his lawyers to publicly comment on many cases....Liberty Counsel, a conservative legal group that is leading a campaign to reopen churches this weekend, is working on issues related to church access in more than 35 states, according to Mat Staver, the group’s chairman.