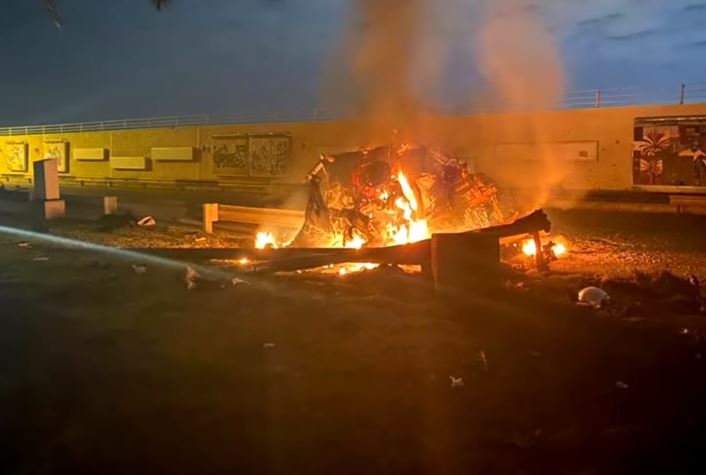 Over the banner headline “Trump Warns Iran As Ayatollah Vows Revenge,” the lead-story headline didn’t emphasize the death of a terrorist but emphasized Democratic doubts and economic fears: “Democrats Question Timing of Strike as Oil Prices Surge and the Stock Market Tumbles.”

Democrats also pressed questions about the attack’s timing and whether it was meant to deflect attention from the president’s expected impeachment trial this month in the Senate. They said he risked suspicion that he was taking action overseas to distract from his political troubles at home, as in the political movie “Wag the Dog.”

Also posted was Millie Tran's analysis, “A Video Tweeted by Pompeo Was Authentic. His Description of It Was Wrong.”

The video lasted only 22 seconds but its message seemed clear, and Secretary of State Mike Pompeo wanted the world to know so he posted it to his Twitter account for his 1.1 million followers.

“Iraqis -- Iraqis -- dancing in the street for freedom; thankful that General Soleimani is no more,” Mr. Pompeo wrote.

The video was authentic, but the problem was that Mr. Pompeo’s description of it was exaggerated.

Witnesses in Iraq who watched the event said that only a handful of men carrying Iraqi flags had run -- not danced -- along a road while the voice of one man was heard praising the death of Maj. Gen. Qassim Suleimani of Iran in a targeted United States airstrike on Friday at Baghdad International Airport....

But the witnesses said that the group of men was very small, that no one joined in and that the minor demonstration was over in less than two minutes.

Tran called the video “misinformation,” even though viewers were free to watch the video and judge for themselves.

Mr. Pompeo’s tweet, widely shared, is another example of how misinformation spreads in the age of social media when people are quick to accept and promote information that validates their own world views.....

Tran promised we wouldn’t see videos like this if the Times still controlled the debate.

That is occurring, they said, because of the breakdown of gatekeeping, a role that the news media had typically played. That breakdown is something President Trump and his supporters have fostered in regularly dismissing fair and factual reporting. Now, governments, the platforms and ordinary citizens all participate in public diplomacy and propaganda.

She concluded with condescension.

But that, the experts added, presumes users want to know a factual, truthful account of events as opposed to something posing as the truth that makes them feel good.

Speaking of misleading videos, the Times followed the Obama administration by falsely placing blame for the 2012 massacre in Benghazi on a YouTube video.