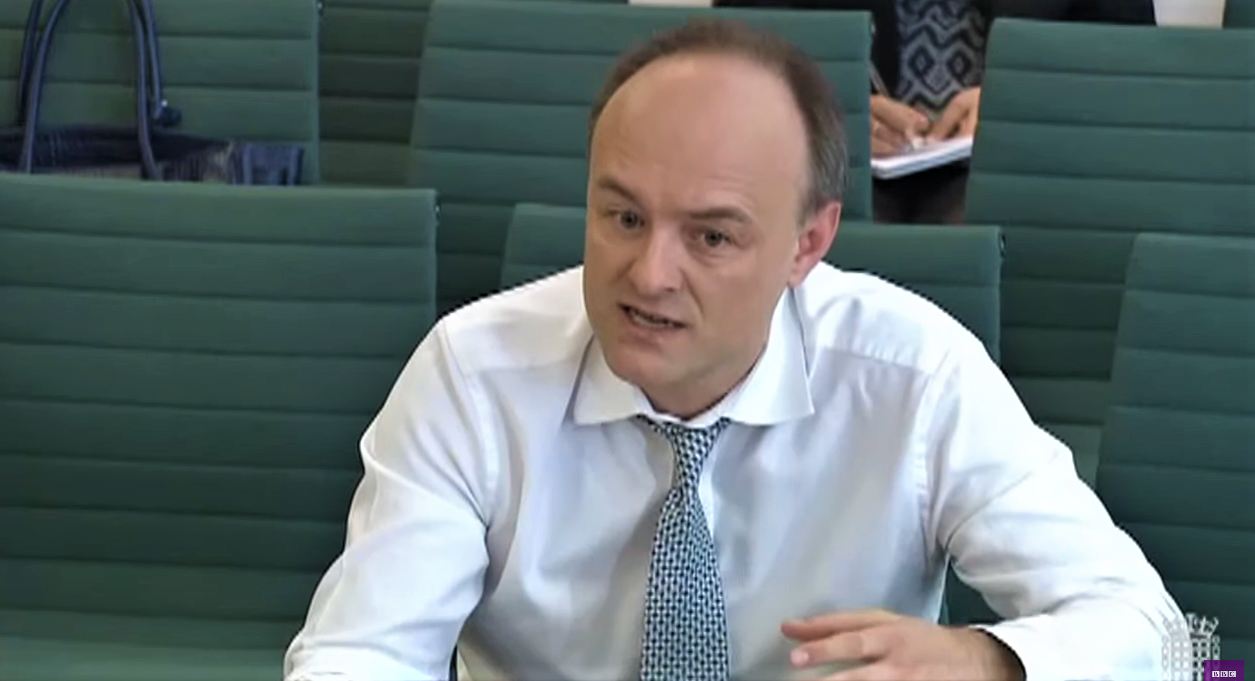 The New York Times devoted a full page to a strikingly condemnatory profile of Dominic Cummings, a political consultant who directed the successful Leave campaign in 2016, and is now both British Prime Minister Boris Johnson's top aide. Cummings is painted as an “evil” “puppet master,” “Rasputin,” and “political assassin.” It emerged from “Brexit”-beat reporters Benjamin Mueller and Stephen Castle, under the headline: “The Life and Times of Brexit’s Chief Brawler – Aide to Prime Minister Leads Cutthroat Charge.”

It’s of a piece with the paper’s extraordinarily slanted coverage of Brexit and the new Prime Minister Boris Johnson, a stout and aggressive fighter for “Brexit” -- the withdrawal of Great Britain from the European Union. The paper’s coverage has been hostile, sometimes hysterically so.

The online headline simply states the slur as a fact: “Dominic Cummings, Boris Johnson’s Rasputin, Is Feeling the Heat of Brexit.”

From a photo caption: “Dominic Cummings was portrayed as the puppet master controlling Prime Minister Boris Johnson at a rally in London on Tuesday.”

Throughout the first weeks of Mr. Johnson’s leadership, Mr. Cummings was a shadowy figure, depicted as the Rasputin directing his boss’s scorched-earth strategy to deliver Brexit by Oct. 31, with or without a deal governing future relations, “come what may.”

To his fans he was a genius, the man who directed the successful Leave campaign in the 2016 referendum and was sure to chain saw his way through the political underbrush to achieve Brexit. To his opponents, he was a genius, but an evil, unprincipled one who would go to any lengths, even subverting the democratic process, to accomplish his goals.

Yet, since Mr. Johnson began unspooling his Brexit strategy, and particularly in this first real week tangling with the reality of Brexit’s complex politics, the mantle of genius has begun to slip from Mr. Cummings’s shoulders.

The resulting chaos has left Britain’s government enfeebled, and its path to leaving the European Union more inscrutable than ever. Lawmakers are now demanding Mr. Cummings’s resignation. Protesters are waving placards with his visage, but embellished with small red horns. Rumors of his imminent firing are gaining traction in Westminster.

Mr. Cummings is said to be plotting a radical response, with Mr. Johnson preparing to defy the law averting a no-deal Brexit by refusing to ask Brussels for a delay, ministers said on Sunday. That could draw the courts into the dispute as the clock ticks down to Oct. 31., a spectacle that Mr. Cummings reckons will only burnish the prime minister’s credibility with pro-Brexit voters far from London.

The reporters greeted the above idea, of the prime minister refusing to ask Brussels for a delay, with an all-too-typical “the end is nigh” prognostication. Oppose the European Left, and into the political wilderness you go:

But it could also drive more moderate voters from the Conservatives for decades. And British news reports said that even Mr. Johnson was concerned that the hardball tactics have backfired.

Mr. Cummings entered politics without any of the party loyalty or the ambition about becoming a lawmaker that drives most young aides. But he soon made a name for himself and, as the chief of staff to a Conservative minister, Michael Gove, at the Education Department starting in 2010, embarked on a reign of fear.

Another photo caption: “Mr. Johnson and Mr. Cummings at Downing Street on Tuesday. A serial provocateur and political assassin, Mr. Cummings has built his career on the outrage of the so-called blob, as he calls parts of the establishment.”

The Washington Post recirculated similar smears in August, right down to the “Rasputin” appellation.