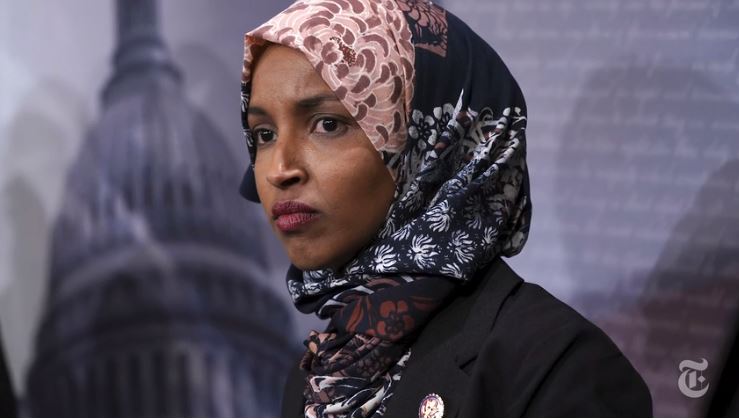 Eligon previously went soft on the racist, sexist, conspiracist and vulgar Black Israelites, after the D.C. and NYC rabble-rousers made it into the news cycle after the verbal assaults on the Kentucky Catholic school teens during the infamous Lincoln Memorial saga.

Eligon piece on Omar for Friday’s edition was along the same rough lines of defending the indefensible:

When Makkah Ali learned that Representative Ilhan Omar had been elected, she could not get enough of the good news -- someone like her, a black Muslim woman, was going to Washington to represent Americans.

But just four months into Ms. Omar’s first term, that feeling of celebration has taken a sharp turn.

Ms. Omar, 36, the first congresswoman to wear a hijab, has faced intense opposition over her outspoken, controversial positions on Israel and comments about Jews that many felt played on anti-Semitic tropes about money and dual loyalty.

And while her choice of words has caused some of her own Muslim constituents to describe her as anti-Semitic, many American Muslims across the country are worried that the ongoing criticism of Ms. Omar is being motived by racism and Islamophobia, and they are concerned about the broader consequences for their communities, including a heightened sense that they are not welcome in the halls of power.

But that momentum could easily be derailed, some say, and the blame for such a setback would lie not just with Ms. Omar’s poor choice of words or Mr. Trump’s inflammatory rhetoric, but also with Democratic leaders who appear reluctant to embrace the diversity they claim to champion.

When Ms. Omar first came onto the national scene as a blunt-talking freshman congresswoman from Minnesota, Suldan Hagi, who is a Muslim immigrant from Somalia like Ms. Omar, understood how her comments and delivery could be perceived as hurtful and offensive.

Then came what Mr. Hagi saw as unfair charges that Ms. Omar was anti-Semitic, and a false insinuation from Mr. Trump that she did not understand the severity of Sept. 11. Now Mr. Hagi thinks it is not Ms. Omar’s politics upsetting people, but her identity.

Eligon strove mightily to turn around the controversy over Rep. Omar’s offensive dismissal of the 9-11 attacks at a CAIR fundraiser as an unfair and even dangerous attack on Omar.

Following those remarks, Mr. Trump shared a video on Twitter that featured four words from Ms. Omar’s speech -- “some people did something” -- against the backdrop of planes hitting the twin towers, suggesting that Ms. Omar did not comprehend the gravity of the attacks.

Mr. Trump also told a Minneapolis TV station that Ms. Omar has “been very disrespectful to this country.”

Representative Nancy Pelosi, the House speaker, acknowledged the video in a statement that criticized the president for using “the painful images of 9/11 for a political attack,” but she failed to mention Ms. Omar by name.

That led to accusations that the speaker and Democratic leadership were ambivalent about the continued attacks faced by Ms. Omar, who said she had received an increase in threats in the wake of the video.

Although Ms. Omar continues to face political attacks and death threats, she has said she does not plan to slow down, a relief to many of her Muslim supporters and others who feel her criticism of the influence Israel has on Washington is legitimate and justified.

As for Ms. Omar’s comments on Israel, Mr. Hagi said that he felt Mr. Trump had said much worse, and that the president had put Ms. Omar in his cross hairs simply to spread fear and score political points.