The NYT’s ‘Needle’ and the Damage Done: ‘People Crying in the Newsroom’ on Election Night 2016 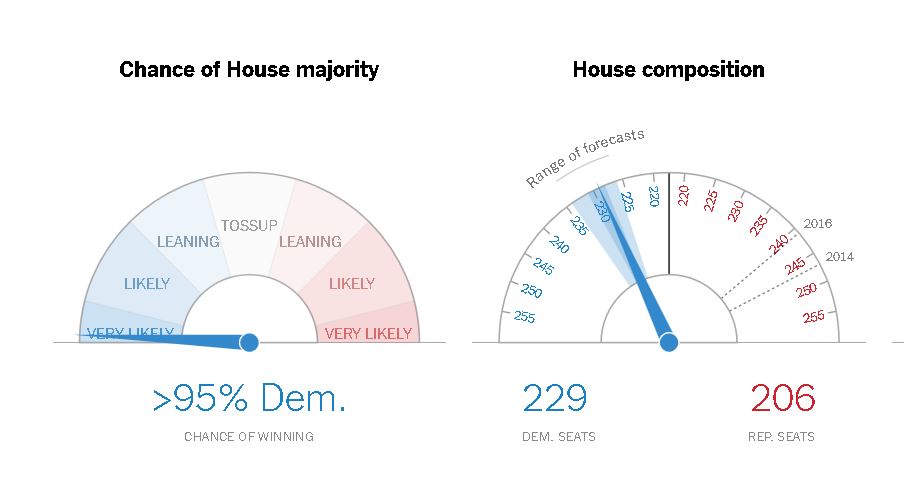 Vanity Fair’s Joe Pompeo had an interesting take Monday on a web-based internet phenomenon that political “junkies” (to coin a phrase) are obsessed with: The New York Times election needle is back, after making a botched debut in 2016:

“Certain Readers May Have a Nervous Reaction’: The New York Times Election Needle Is Back, with a Few New Safety Feature -- After the trauma of November 8, 2016, the Times is taking steps not to trigger its readers -- even as it rolls out not one, but two midterm-election needles.”

The needle injected Democratic political addicts (and NYT readers, but I repeat myself) with a false sense of well-being:

The needle, which debuted with Trump vs. Clinton, is a symbol of the speed with which political hopes can be upended, as well as the maddening uncertainty of polling—and liberals are still deeply haunted by it. On November 8, 2016, the Times’s pre-election data initially showed Hillary Clinton with an 85 percent chance of victory. That prediction was based on the Times’s internal aggregation of all the credible polls heading into the homestretch of the race. In the days and hours leading up to the earliest returns, the 85 percent figure was featured heavily in Times news coverage and on the home page. Additionally, it provided the starting point for the needle -- also prominently displayed on nytimes.com -- which began the night tilting reassuringly toward the blue end of the forecast dial.

Times managing editor Joe Khan revealed a bit too much about the special snowflakes that populate his paper’s newsroom:

At the Times, Trump’s election engendered a period of soul-searching, and the centrality of the needle in the paper’s online coverage became a contentious issue. What did it mean that the needle, mathematically sound as it was, had ended up so far away from that original 85 percent? “In the minds of some people,” Times managing editor Joe Kahn told me, “everything is the needle. The poll of polls is the needle. The real-time results are the needle. But really, the model around the needle is based on intensive, precinct-by-precinct data.” The needle also appeared to signify a gap between a set of newer, next-generation Times employees who were visibly distressed over Trump’s win, and the journalistic stoicism of the paper’s old guard. “When the needle started twitching toward Trump, you could tell who was watching, because they were the ones who started getting distraught,” one editor recalled. “There were people crying in the newsroom that night.”

So there is crying in journalism.

As it was, the Times’ psychologically debilitating “needle”-based forecast got off to a late start on Election Night 2018, with the forecast, expected to start at 8 p.m. at the latest, didn’t start until sometime much later in the evening. At 9:07 p.m. the top of the page read: “We do not yet feel confident enough in our estimates to publish a live forecast. If and when we do, we will publish it here.” Eventually they did.