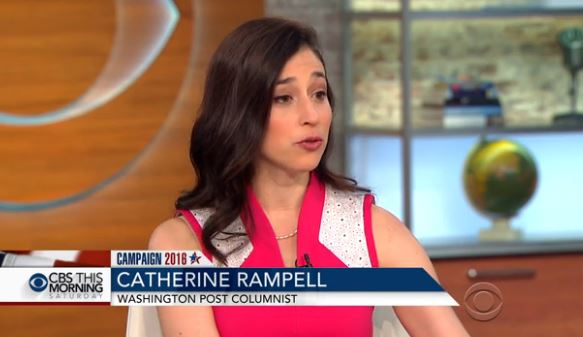 After consigning Donald Trump’s campaign to doom, and foreseeing the inevitable debriefing by Republican leaders, Rampell angrily blamed the media. Specifically, the “right-wing....media machine persuading their base to believe completely bonkers, bigoted garbage.”

As in the last “autopsy,” the GOP establishment will probably conclude that it needs to broaden its appeal to demographics beyond older white men; that what prevented this more widespread appeal in 2016 was having a boorish, sexist, race-baiting, egomaniacal, undisciplined nominee...

The sickness in today’s Republican Party is not confined to its current standard-bearer...

If Republicans truly want to save the Republican Party, they need to go to war with right-wing media. That is, they need to dismantle the media machine persuading their base to believe completely bonkers, bigoted garbage.

It is, after all, the right-wing radio, TV and Internet fever swamps that have gotten them into this mess, that have led to massive misinformation, disinformation and cynicism among Republican voters. And draining those fever swamps is the only way to get them out of it.

It’s not as if Republican politicians have had any principled objection to media criticism in the past. Of course, their critiques have been reserved solely for left-wing lame-stream media, or at least media outlets they think are putting their thumbs on the scale for Democratic causes. When Republicans generically attack bias in “the media,” they are widely understood to be referring to centrist and left-leaning media, even though the most-watched cable news channel is, by leaps and bounds, conservative Fox News.

When it comes to the paranoid, destructive excesses of right-wing media -- not just Fox News’s headliners such as Sean Hannity, but also Breitbart, Rush Limbaugh, Alex Jones -- Republican leaders have been somewhat more reluctant to condemn or even gently critique.

Birtherism, which Republican leaders were painfully slow to renounce, helped delegitimize the popular mandate of our first black president, even as it legitimized widespread racial resentment.

Is that the same "birtherism" which was fostered by Hillary Clinton supporters during the 2008 Democratic primaries?

Claims of voter fraud justified measures that made it more difficult for Democratic-leaning groups to vote, even as they paved the way for a sore-loser candidate to claim he’s about to be robbed of his victory.

Liberal journalists have short memories; the left mounted challenges against Bush’s victories in 2000 and 2004, and many cried vote fraud during Bernie Sanders' failed primary assault on Hillary Clinton.

Never-ending witch hunts -- against Planned Parenthood, climate scientists, Hillary Clinton -- similarly galvanized supporters in the near term but increased bloodlust for punishment of political enemies in the long run.

A furious Rampell claimed that Trump’s “nomination is the product of years of race-baiting, conspiracy-theorizing, expert-delegitimizing right-wing media nonsense...”

Here’s Rampell unleashing her objective political expertise in November 2014: “So when will the GOP learn to stop worrying and love Obamacare?” Since then, more are realizing that the law has become precisely the kind of expensive bureaucratic nightmare conservatives predicted. Even her former colleagues at the NYT have gotten the hint.