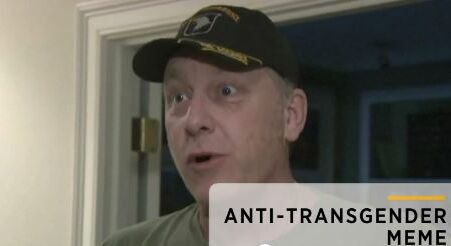 Confess! Confess! Curt Schilling, the Boston Red Sox pitching ace turned sports media personality, was canned by ESPN after sharing a post on his Facebook account against allowing transgenders to choose which bathroom they use, accompanied by a crude photo of a large man in unflattering drag.

New York Times reporter Richard Sandomir wrote up “ESPN Fires Schilling Over an Offensive Post” for Thursday’s sports page, then put on his moralistic liberal columnist cap for Friday’s follow-up on the front of the sports section: “Contrition Continues to Elude Schilling.” The online headline: ESPN Finally Grows Tired of Curt Schilling’s Barbed Language.” The libertine liberals at the New York Times became positively moralistic in its own Facebook blurb promoting Sandomir’s column: “Curt Schilling’s response suggests he may not comprehend the ramifications of what he did.”

[NHL player] Andrew Shaw and Curt Schilling insulted the gay and transgender community in recent days. But how they responded afterward suggests that one of them (Shaw) comprehends the ramifications of what he did, and the other (Schilling) does not.

Schilling did not choose the road to contrition after he shared a post on Facebook that was an apparent response to the North Carolina law that bars transgender people from using bathrooms and locker rooms that do not correspond with their birth genders. On his blog, he snarled at “all of you out there who are just dying to be offended so you can create some sort of faux cause to rally behind.”

Sandomir and the rest of the media are also holding Schilling’s conservative politics against him (meanwhile, Keith Olbermann’s left-wing vulgarity doesn’t stop him getting hired).

When he shared the message on social media earlier this week, he did not seem to grasp that he had implicitly endorsed it, especially after he added a comment about which public restrooms are appropriate for men and which are not. He is a public figure with a well-developed online profile as a political conservative and Second Amendment supporter who, by the way, was a terrific pitcher over a 20-season career. His propensity for living on the third rail of social media was at odds with ESPN’s internal policy that cautions its workers to be prudent.

Sandomir followed the politically correct script all the way.

In firing him, ESPN shed itself of a nuisance who did not, or could not, follow corporate policy and could not grasp that passing around an anti-transgender message digitally might affect people who are finding their way to new gender identities. Crass words and visuals hurt.

We are in a moment when tolerance exists side-by-side with intolerance. Same-sex marriage is widely accepted, but North Carolina enacts its bathroom law...

ESPN is openly progressive, celebrating every advance of the sexual revolution, and it has been wildly inconsistent in its discipline for on-air statements. The network stood by an employee who guffawed as Mike Tyson graphically described a black man raping Sarah Palin. in an interview. They failed to discipline another employee who compared Tea Party members to ISIS. They issued only a brief suspension to Stephen A. Smith when he argued that women can “provoke” their own beatings. Critically, each of those incidents occurred on the job and not on personal Facebook postings.

Piling on, Times Sunday Magazine writer Greg Howard on Friday called Schilling "an outspoken bigot, undoubtedly one of the worst acting as an outward face of a reputable company." Howard described the former pitcher's Facebook page as "the thoughts and paranoia of what I would describe as a racist, sexist, Islamophobic, xenophobic, homophobic, transphobic conspiracy theorist who believes deeply in the Christian God and much less so in the humanity of people who are unlike him."