It turns out that New York Times national reporter Jackie Calmes' biased report on "conservative media" and the harm it causes to the GOP was just a taster. Here is the bloated main course. Calmes spent a semester at the Shorenstein Center at Harvard University studying "conservative media," (h/t Dan Gainor) and this week issued an exhaustive 16,000-word report with the oh-so-objective title, "'They Don't Give a Damn about Governing' -- Conservative Media’s Influence on the Republican Party," blaming the "far right" for killing the moderate, pragmatic GOP, while dismissing the very idea of a liberal mainstream media. 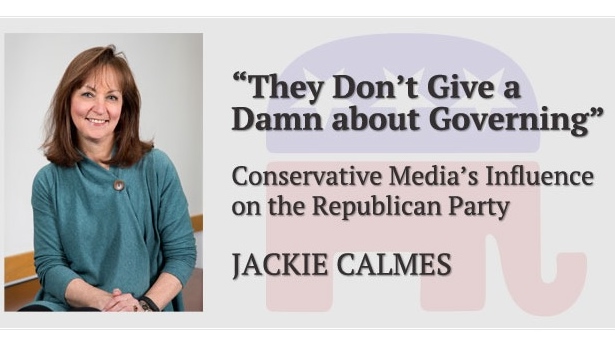 It should put an end to any claims of objectivity on behalf of Calmes, whose liberal political preferences are obvious to any casual reader of her output.

Her thesis is that a radicalized right-wing base, egged on by a "far right" "conservative media," is crippling the GOP's ability to govern as a national party by pushing it far from the mainstream and toward "the wrong side of history" on issues like contraception, global warming, amnesty for illegals, gay marriage, Obama-care, and more. The thesis sentence:

If leaders of the Republican Party are not setting its agenda, who is?

Answer? The "conservative media." (Calmes refused to even confront the idea of a "liberal media," with sympathetic sources like ABC analyst Matthew Dowd calling it the "quote-unquote liberal media").

First Calmes laid out the woes of the incoming Republican Congress, then zeroed in on the problem.

As many [Republican leaders] concede, it is conservative media – not just talk-show celebrities Rush Limbaugh, Sean Hannity, Mark Levin and Laura Ingraham, but also lesser-known talkers like Steve Deace, and an expanding web of “news” sites and social media outlets with financial and ideological alliances with far-right anti-government, anti-establishment groups like Heritage Action, Americans for Prosperity, Club for Growth and FreedomWorks. Once allied with but now increasingly hostile to the Republican hierarchy, conservative media is shaping the party’s agenda in ways that are impeding Republicans’ ability to govern and to win presidential elections. “These people, practically speaking, are preventing the Republican Party from governing, which means they’re really preventing it from becoming a presidential party as well,” said Geoffrey Kabaservice, author of Rule and Ruin: The Downfall of Moderation and the Destruction of the Republican Party, from Eisenhower to the Tea Party, and himself a Republican.

And who is Steve Deace? The baby-faced 41-year-old Deace (pronounced Dace) is a college dropout, self-described one-time loser, former part-time sports writer and born-again Christian who one day unexpectedly found himself with a radio show in Iowa, home of the first-in-the-nation contest for aspiring presidential nominees. Nine years later, he is nationally syndicated from Des Moines and a prolific columnist and social media presence with tens of thousands of followers. As such, the entrepreneurial Deace exemplifies the otherwise obscure and deeply conservative new-media figures who, collectively, often call the shots in the Republican Party, by both provoking and amplifying the party’s conservative activists and their hardline positions. His motto is “Fear God. Tell the Truth. Make Money.”

Twenty years ago, former radio shock-jock Rush Limbaugh was mostly alone, though soon to be joined by Roger Ailes and Rupert Murdoch’s Fox News Channel in playing to conservative audiences and validating their biases. Since then – to an extent unimagined as recently as Barack Obama’s election – the combination of the Internet and social media, broadcast deregulation and technological advances like live-streaming and on-demand audio and video “products” have allowed these new voices and scribblers to proliferate, empowering figures who boast of being more conservative than Fox and “El Rushbo” to shape Republican politics.

Besides a ton of anonymous Republican staffers traumaitzed by phone calls from conservative constituents, Calmes enlisted former Republican politicians Vin Weber and Trent Lott as critics of the right wing. Fox News and radio host Sean Hannity got a more critical workout, mentioned 20 times in the report as part of the problem, as reported by the Washington Post's Eric Wemple, who (unlike Calmes) allowed Hannity to respond:

By Hannity’s account, Calmes never rang him up to get his side of the story. The Erik Wemple Blog did, and Hannity called the allegation that he doesn’t advance solutions 'bull--' Responding to just this sort of criticism, Hannity in early 2014 unveiled a platform of his own –'conservative solutions' to U.S. problems, including a balanced budget amendment and fomenting 'home-grown energy resources,' among other measures. 'She’s making a broad, sweeping generalization,” says Hannity...."In my opinion, she had a predetermined opinion before' embarking on the study."

Norman Ornstein, who has made a career warning about extremist conservatives, got plenty of sympathetic space:

“One of the realities here is that these people have always existed,” said Norman J. Ornstein, a political scientist at the center-right American Enterprise Institute and co-author with Thomas E. Mann of the book It’s Even Worse Than It Looks, about what the authors see as the radicalization of the Republican Party. “But they were at the fringes, the John Birch Society types. Now, because of social media and because you have a culture of extremism that is not culled out more generally, they can move into the mainstream and actually hijack a major party. And that’s what’s going on here.”

Conservative media, having helped push the party so far to the anti-government, anti-compromise ideological right, attacks Republican leaders for taking the smallest step toward the moderate middle.

Yet even though it is now Republicans who have lost the popular vote for president in five of the last six elections, party leaders lament that Democrats’ late 20th century model for moderating is inoperative for Republicans in this 21st century Internet age. The problem, as they see it: Conservative media, having helped push the party so far to the anti-government, anti-compromise ideological right, attacks Republican leaders for taking the smallest step toward the moderate middle. “In the late ‘80s and early ‘90s, Democrats weren’t dealing with a media that has become the way the conservative media has become,” which is “much more powerful than John Boehner and Mitch McConnell,” said Matthew Dowd, a strategist in George W. Bush’s campaigns. Democratic leaders “didn’t have to deal with a quote-unquote liberal media out there that was going to confront them every time they took a turn.”

Calmes noted that "Setting the agenda, however, is not the same as winning, whether in the congressional or presidential arenas. Conservative media, and the conservative activists the media gives voice to, often do not win," mentioning "the failed 2013 government shutdown," Mitt Romney’s nomination and the failure to repeal Obamacare.

She took it as fact that conservatives, "By backing the most conservative contenders and enforcing litmus tests...have forced the ultimate nominee further right -- weakening Romney and, before him, Senator John McCain among swing voters in the general election. Yet when the nominee loses, that is the fault of his campaign and the national party, in conservative media’s telling."