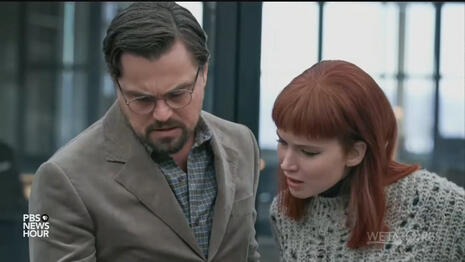 This just in: The earth has nine years left before Climate Change’s impact is irreversible.

So says Leonardo DiCaprio in a new Deadline interview. That’s hardly breaking news from the Don’t Look Up star. He’s dedicated much of his personal brand to warning us about global warming, environmental degradation and other frightening scenarios.

He used his 2016 Oscar speech to promote enviro-activism, produced documentaries on the subject and his latest film is one honking metaphor for ignoring the peril staring us straight in the face.

Let’s put the Climate Change debate off to the side for a moment.

It’s clear to most casual observers that DiCaprio doesn’t practice what he preaches. Sure, he’ll drive around in a Prius or two, but story after story shows he leaves a massive carbon footprint in his wake.

And that doesn’t include aspects of his private life we cannot know, from the size of his homes to just how much he travels, per movie, for promotional purposes.

When it comes to eco-savvy celebrities, Ed Begley, Jr. by most accounts “walks the walk.”

So any journalist fortunate enough to engage the Oscar winner should bring up the discrepancy. It’s a classic case of “do what I say, not what I do.”

So how many journalists have asked some tough but fair questions of DiCaprio on the subject over the past decade? This reporter can’t think of a single example. Please share any in the comments section below.

The closest example could be a journalist pressing fellow eco-activist Mark Ruffalo about DiCaprio’s excesses.  The Hulk actor didn’t take it well.

It should be more than just one reporter, though, who challenges DiCaprio on the subject.

Country superstar Morgan Wallen will likely be asked question after question about his “n-word” controversy for the foreseeable future. It’s not an unfair question, even if some suggest the issue has been blown wildly out of proportion.

He said the word in question. It became a massive news story, and he took several direct actions to address and make amends for it.

Why not DiCaprio’s eco-hypocrisy? It’s mostly because it would embarrass the superstar and set back the climate change movement to a certain degree. And today’s Hollywood reporters would rather leave the question out of their interviews than do that.

Need another recent example where the Hollywood press acted as de facto spin doctors for the rich, famous and overtly liberal?

Just this week we learned Alec Baldwin is being sued for $25 million by the family of a slain Marine.

The 63-year-old actor is named in a lawsuit seeking $25 million and alleging defamation, invasion of privacy, negligence and intentional infliction of emotional distress, according to court documents obtained by Fox News Digital.

The lawsuit stems from a post that Baldwin shared on Instagram earlier this month after he gave $5,000 to the widow of a fallen soldier to help her with their newborn daughter. Marine Lance Cpl. Rylee J. McCollum was killed Aug. 26 in Kabul in a suicide bombing as he was processing refugees amid the United States’ controversial withdrawal from the country.

Still, given that Baldwin is a major star and is frequently in the news – last year’s accidental shooting heightened his public profile — suggests a media wave of coverage.

It’s a natural fit, though, for the big four Hollywood news sites – The Wrap, Deadline, Variety and The Hollywood Reporter.

Yet a search of all four sites on Jan. 21, a full day after the news broke, couldn’t find any coverage of the matter.

It’s hard to see any other reason than those sites wish to protect the aggressively liberal Baldwin from a damaging news cycle. No matter how the lawsuit progresses, the “30 Rock” alum comes off badly.

These are just two examples where Hollywood journalists revealed their bias. There are many more. Once again, some of the most insidious bias includes stories that aren’t covered and questions that aren’t asked.

Consumers should know when they read this news outlets they’re not getting the full story.