“Your account was permanently suspended due to multiple or repeat violations of the Twitter rules. The account will not restored. Please do not respond to this email as replies and new appeals for this account will not be monitored.”

Some of Hollywood’s most notable progressive players have Tweeted things that, on paper, should have booted them off the platform.

Or, at the very least, drew the service’s ire in the former of temporary suspensions … like they did to conservative actor James Woods.

Twitter CEO Jack Dorsey swears his service doesn’t have an ideological ax to grind. The facts do more than suggest otherwise.

That’s even more glaring when it comes to today’s most outspoken progressive stars. Their comments suggest an unfettered rage that would draw Team Twitter’s attention. None of the following stars, however, have lost their Tweeting privileges.

Consider Twitter’s own violation handbook, spelled out online for all to see.

You may not promote violence against or directly attack or threaten other people on the basis of race, ethnicity, national origin, sexual orientation, gender, gender identity, religious affiliation, age, disability, or serious disease.

We prohibit content that makes violent threats against an identifiable target. Violent threats are declarative statements of intent to inflict injuries that would result in serious and lasting bodily harm, where an individual could die or be significantly injured, e.g., “I will kill you”.

Bette Midler fantasized about members of the Trump family getting hanged for their alleged crimes.

Actor Peter Fonda, part of the legendary Fonda acting family, faced heat earlier this year when he demanded the president’s young son, Barron Trump, be put in a cage with pedophiles.

“We should rip Barron Trump from his mother’s arms and put him in a cage with pedophiles and see if mother will stand up against the giant a–hole she is married to. 90 million people in the streets on the same weekend in the country. F—,” the initial tweet read.

Too often those suspended by the service aren’t even told which Tweet or Tweets merited the ban, making possible apologies impossible. Just ask Kelly.

First, the star of the recently canceled The Hunt for the Trump Tapes challenged the president to a fight. Next, he suggested that fellow far-left comic Kathy Griffin’s infamous photo featuring Trump’s decapitated head would be real next time.

Note: we have a zero tolerance policy against violent threats. Those deemed to be sharing violent threats will face immediate and permanent suspension of their account.

Arnold also posted threatening messages regarding the children of both President Trump and the Murdoch family. 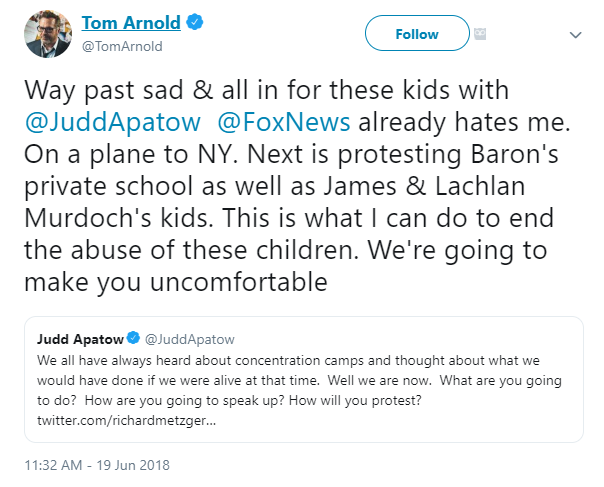 Arnold’s Twitter rage extends to people of color. He used vile, sexist language against a black woman, conservative pundit Candace Owens, which goes against not one but two Twitter rules.

Repeated and/or non-consensual slurs, epithets, racist and sexist tropes, or other content that degrades someone.

“Hey, @LindseyGrahamSC what kind of d–k sucking video do they have on you for you 2 be acting like this? Wouldn’t coming out be more honorable?”

Jimmy Kimmel served up a similarly homophobic attack against Fox News star Sean Hannity. The two feuded earlier this year, with the far-left comic firing back with this hate Tweet: 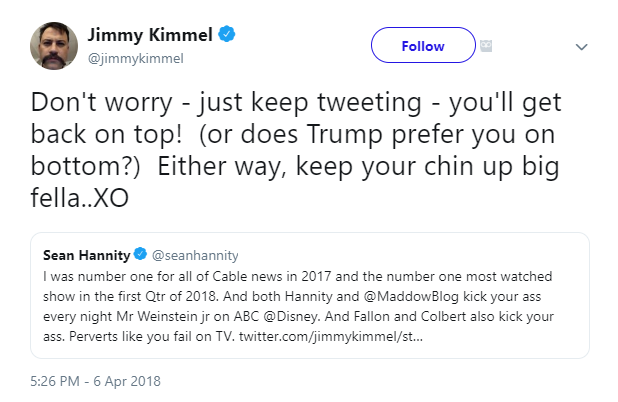 Director Joss Whedon wished death to President Trump in one of his many anti-Trump Tweets. That didn’t draw the Secret Service’s attention, nor the Twitter’s overlords. Again, consider the Twitter rules of conduct:

Wishing, hoping or calling for serious harm on a person or group of people

We prohibit content that wishes, hopes, promotes, or expresses a desire for death, serious and lasting bodily harm, or serious disease against an entire protected category and/or individuals who may be members of that category.

President Trump isn’t in a protected class, per se, but any suggested attack on a sitting president alerts Secret Service.

Repeated and/or non-consensual slurs, epithets, racist and sexist tropes, or other content that degrades someone.

Rosie O’Donnell evoked that rule when she called NRA spokeswoman Dana Loesch a “whore” in a furious tweet.

This reporter is uneasy with booting people from social media. Users can always block people with whom they disagree. Platforms like Facebook and Twitter should tread very carefully when blocking users, partly because the rationale for those moves can be … questionable.