Morning Joe: 'Hell to Pay' and 'Deaths Are Coming' Because of Trump's Jerusalem Speech 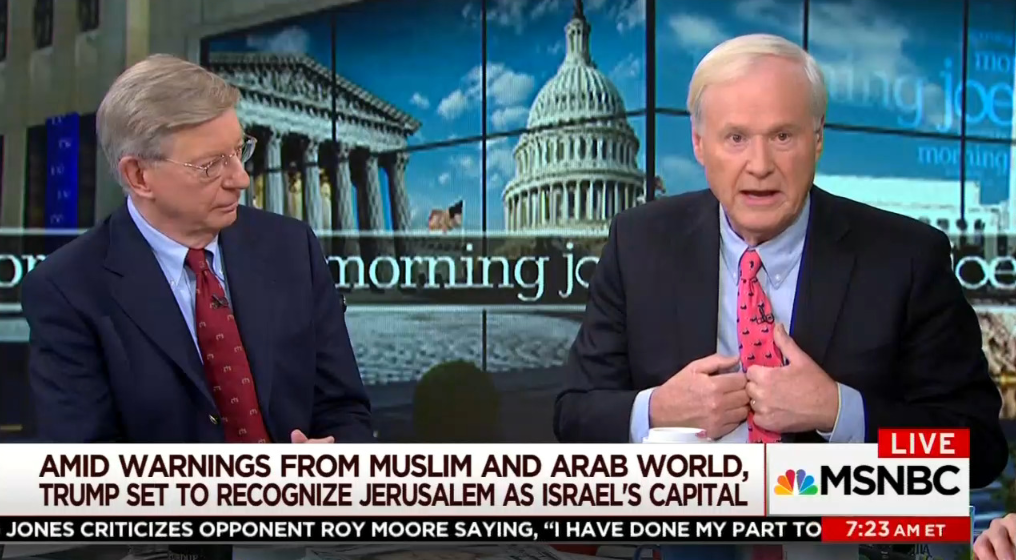 Wednesday’s Morning Joe devoted a significant portion of its broadcast to covering President Trump’s speech today that will officially recognize Jerusalem as the capital of Israel. In response to reports that the Palestinian Authority is reacting to this development by calling for potentially violent protests and a “day of anger,” MSNBC’s top liberal pundits knew precisely where the blame for any resultant violence should fall – Trump, of course.

Guest Chris Matthews even fumed that there would be “hell to pay” and that “deaths are coming” because of the move. Astoundingly, none of the show’s liberal journalists thought to blame any of the expected future perpetrators of violence for any deaths or rioting that may follow Trump’s speech.

Halfway through the first hour of the show, NBC news contributor and former CIA intelligence officer Ned Price raised the possibility that American civilians, soldiers, and diplomats abroad will be targeted in the aftermath of Trump’s Jerusalem speech:

PRICE : Well Mike, I think that's precisely the concern, and that's one of the many reasons why it's been reported that Secretaries Mattis and Tillerson voiced private opposition to this move. This is not an “America First” foreign policy gesture. This is a “Trump First” move, a move that is predicated on a crass political calculation and a crass political, uh, pro-, campaign trail promise. This will not make the American people, diplomats, military personnel, private citizens safer in the countries that you just mentioned. And as we saw, the consulate general in Jerusalem put out a very stern message essentially telling Americans in that part of the world that they should be on lockdown. We have seen similar broad warnings from the State Department warning of violence. This move will certainly lead to violence. The question is: What will be the ramifications of that violence and just how deadly it will be [sic]?

But who would be responsible for any such violence? Co-host Mika Brzezinski and MSNBC political contributor Elise Jordan knew the answer to that:

BRZEZINSKI: Yeah. I mean, Elise, the image in my mind as the President is this massive drunk bull and the world is a china shop?

ELISE JORDAN: This to me seems to have more in terms of public diplomacy implications than practical implications just because this isn’t -- he's actually signing another six month waiver to keep the embassy in Tel Aviv. He's saying he's moving it, but not really taking action necessarily to build a new embassy in Jerusalem and start that process of shifting operations. So, I don't get what we gain other than just inflaming people.

During the second hour of their broadcast, Morning Joe returned to these same talking points in another segment on Trump’s Jerusalem speech. Reporting live from the holy city itself, MSNBC host Ayman Mohyeldin repeatedly put the onus for any possible violence on Trump’s choice of language:

BRZEZINSKI: Later today, President Trump intends to announce that the United States now recognizes Jerusalem as the capital of Israel. Joining us live from just outside the old city in East Jerusalem, co-host of Morning Joe First Look, Ayman Mohyeldin. Ayman, what's the atmosphere on the ground there?

MOHYELDIN: Yeah, Mika, I mean, that is a very good question because it is a very tense atmosphere right now. And everything is gonna come down really to how President Trump delivers this statement. This is, in some ways, a diplomatic crisis, a potential diplomatic crisis, that is the doing of the President himself because this was something that has been a longstanding policy of the United States – not to touch the issue of Jerusalem or move the embassy here. But now, as we’ve seen in the last 24 hours, world leaders are reacting and the t- -- the mood on the street here is very tense. On one hand, you have the Israeli side. Security has been beefed up. On the other side, you have the Palestinian authority calling for massive protests and demonstrations over the course of the next three days. They've already labeled it a day of anger over what could be an explosive decision by the U.S. President to recognize Jerusalem as the capital of Israel.

But going back to the original point, Mika, it is really gonna come down to how President Trump delivers this statement. Is he going to be very provocative in the language that he uses? Is he going to make it sound like there is no open door for East Jerusalem to be a part of a future Palestinian state? It’s all gonna come down to the language the President uses, and I think that is what has a lot of people here somewhat concerned, particularly on the Palestinian or Arab streets, so to speak. They don't necessarily have a lot of confidence that the diplomatic niceties will be finessed into that speech that can give them an opportunity to find some kind of wiggle room to say: We’re gonna be committed to the process, the peace process, and see where this goes from here.

So, the same Palestinian Authority that pays Palestinian and Israeli Arabs to kill Israelis in terrorist attacks is calling for protests and demonstrations in response to America recognizing the capital of a sovereign state, but Trump is the one who needs to refrain from being too provocative?

At least we know where MSNBC’s priorities are:

Co-host Joe Scarborough’s conclusion from Mohyeldin’s report was very similar to his fiancé’s take earlier: “[Trump]'s not really doing anything other than destabilizing the Middle East with this announcement.” So, again, terrorists threatening violence against their political opponents for saying things they don’t like isn’t the problem, but Trump is.

Has Trump existed in the Middle East for the past 1400 years? Is that really what has made the region so volatile for so long? Maybe Morning Joe is really onto something here.

Columnist George Will tried to respond to Scarborough’s assertion by pointing out that no real peace process exists at the moment for Trump to even disrupt, but MSNBC host Chris Matthews had a very different reaction. Putting on the mantle of a prophet of doom, Matthews confidently proclaimed that there would be “hell to pay” and “deaths are coming now because of [Trump’s speech]”:

MATTHEWS: I think the only hope for peace is to give a portion of East Jerusalem, maybe all of it, and that's what Clinton tried to do at Taba at the end of his second term. ‘Cause if you don't give the Palestinians hope that they can have national integrity and have a capital where they believe it should be, you're gonna have an unending problem. By the way, deaths are coming now because of this.

MATTHEWS: You can just bet that the next few weeks, we’re gonna have hell to pay for this totally erratic decision by this president. Every party that has had the White House since ‘48 has recognized you have to be careful over there. I lived over there, right up Damascus Gate, right where that picture was. And I gotta tell ya, everything is intricate over there. Bethlehem is intricate with the Armenian church, and the Chri- -- and the Catholic church. Everything is intricate. The guys with the -- the ultra-religious people in the Jewish community and the Arab call to prayer, it's all intermingled and intricately combined. And to mess that up now makes no sense for anybody to do that. It's not in America's interests. And I don't know whose interest in Israel it is.

Violent politicians and criminals are responsible for their own evil intent and actions, not the people they are angry at for political reasons. Is that really so hard for MSNBC to understand?