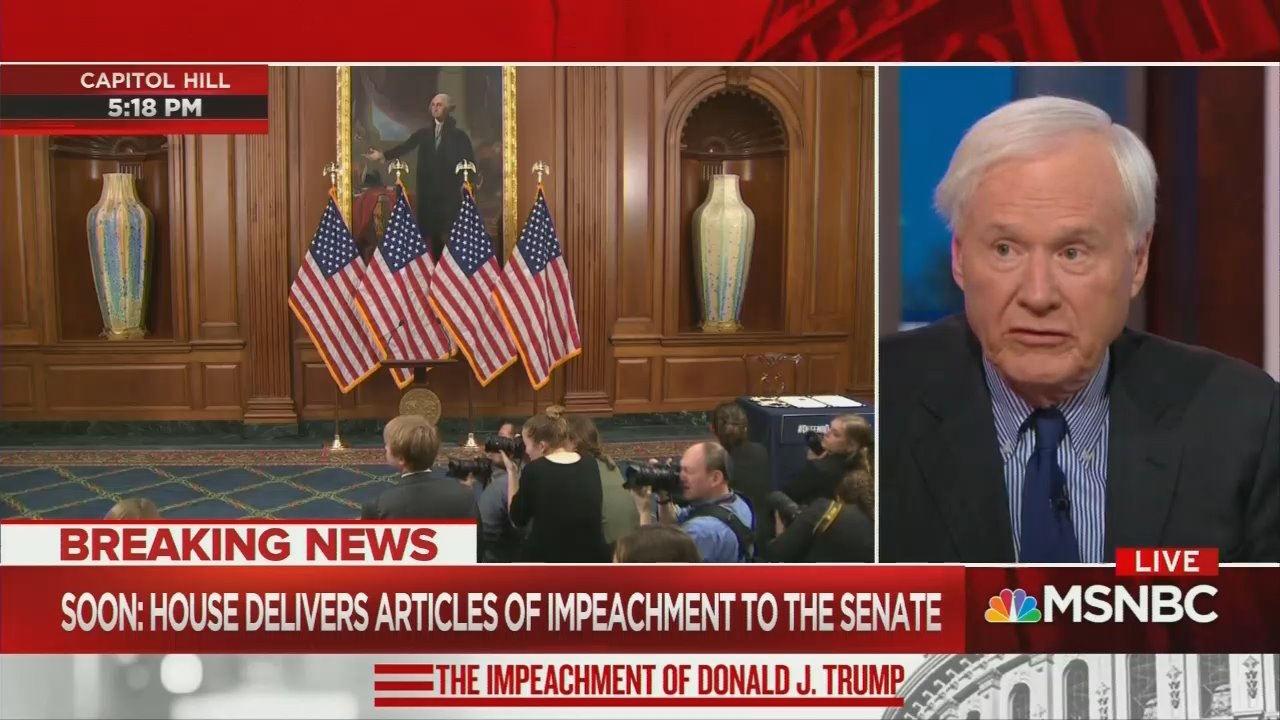 But our pro-impeachment media are investing Pelosi’s putsch with as much moral authority as they can muster. During live coverage of the vote on December 18, MSNBC’s Andrea Mitchell gushed over Pelosi’s black outfit. “She's certainly always well appointed, beautifully arrayed, if you will. She's wearing black today. That is a symbolic expression of how somberly they're taking this.” Chris Matthews added “It's sacramental. It's sacramental.”

Sacramental? Matthews returned to this ridiculous concept on January 15, as the House Democrats made a dramatic show for the cameras,  marching their articles of impeachment to the Senate. Matthews told Chuck Todd “There’s a sacramental quality to this. There’s a ritual.”

MSNBC reporter Garrett Haake affirmed this. "I’m so glad Chris used the word 'ritual' because that’s the word that has been stuck in my head about this all day today. It's beyond formality. There is something almost religious to it.”

A few minutes later, Matthews suggested “there’s an excommunication aspect to this thing.” Todd replied “you are really taking this Catholic metaphor and going at it! Run, Chris, run!” Matthews then added “the Lincoln Memorial is basically a church.”

As Speaker Pelosi was shown walking to sign the impeachment articles, Matthews returned to churchy metaphors. Now it was getting truly wacky. Pelosi was now like a “priest for life,” ordained for Congress.

"Well, there's a sacramental statement, for life. Like a priest for life. It's a perfect statement of what she is. I think she is very reverential. I mean, she's one tough politician, but she's got another part of her, which is very respectful of hierarchy, in terms of who — true moral authority. The Democratic elected officials have true moral authority to run the country.”

All of these mangled metaphors ignore that Pelosi’s crusades for abortion on demand and punitive LGBT “anti-discrimination” measures to crush religious liberty, which are in direct conflict with Catholic teaching. Her political career has been a war with her alleged religious affiliation.

This praise is goofball stuff, and at least one celebrated liberal Catholic was having fun with all these Pelosi parades. On his CBS Late Show, Stephen Colbert put on dramatic lighting and joked “First, each member of Congress steps forward to seal the text with a single drop of blood. Then, the sacred runes are drawn from beneath Jerrold Nadler's jowls, and lo, a snow-white ram is brought forth to pluck the maidenhead of Adam Schiff.”

(Then, as expected,  he mocked Sen. Mitch McConnell as a hideous demon, to keep it acceptable to his fans.)

Impeachment is in no way a sacred act, and it carries no moral authority. But our pro-impeachment media are employing every sappy metaphor to achieve their fervent desire: dragging President Trump out of the White House, and throwing him into the pyre.