The latest telecast of the Emmy awards on CBS drew the lowest audience ever, 11.4 million, and that is no surprise. This show could not have been more predictable -- quickly devolving into a boorish hours-long festival of Trump-bashing and Hillary-mourning.

Awards shows used to be blockbusters for TV. But in the Age of Trump, they’re becoming screaming political spectacles, like the infamous Paul Wellstone funeral/pep rally of 2002. The red-state audience knows it’s going to be a leftist hootenanny attacking conservatives, all night long. Why put up with it? So they don’t bother. 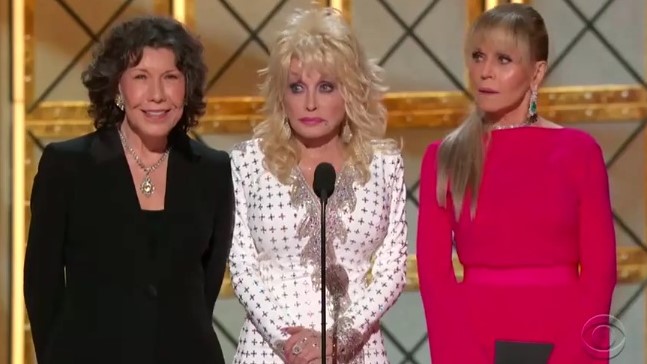 Naturally, the Hollywood crowd gave out Emmy awards like candy to Saturday Night Live for their sneering satire of Trump’s presidential campaign, and Kate McKinnon thanked Hillary Clinton for her alleged “grace and grit.”

Picking up the Emmy for Best Comedy Series Actor, Donald Glover of the FX show Atlanta announced: “I want to thank Trump for making black people Number One on the Most Oppressed List. He’s the reason I’m probably up here.”

Emmy host Stephen Colbert even compared Trump to Walter White, the murderous drug kingpin at the center of Breaking Bad. He joked “I thought you people loved morally compromised antiheroes. You like Walter White. He’s just Walter Much Whiter.”

There’s another obvious reason awards shows have been slipping: Who’s nominated, and who wins. Much like the Oscars, the Emmy voters lurch toward excess, the egregiously sexy and violent and progressive/“transgressive” products. Popular shows are often rejected. Because well,  they’re popular, which must mean they’re not “smart” enough, or they’re just too formulaic and predictable.

Shows on the actual Big Four networks get slighted for cable networks and now streaming services. Here are the top Emmy winners by network in 2017: 29 wins for HBO, 20 for Netflix, 15 for NBC, and 10 for Hulu.  By contrast, ABC won seven. Subtract NBC’s nine awards for “Saturday Night Live” and they won only six. CBS had four.

The Emmy for Best Drama hasn’t gone to a broadcast network since 2006, but in that span  they gave four to Mad Men (AMC),  two to Breaking Bad (AMC), and two to Game of Thrones (HBO).  A top-rated show like CBS’s NCIS doesn’t get nominated for Emmys....unless you count “Outstanding Stunt Coordination.” But Logo’s drag-queen show RuPaul’s Drag Race won three Emmys in 2017.

There’s also little suspense when the same liberal favorites win Emmys over and over. Julia Louis-Dreyfus won her sixth Emmy in a row for HBO’s Veep. Yawn. It doesn’t matter that the ratings are tiny. Jon Stewart’s Daily Show won for ten years in a row. Why tune in for that? And why don’t the over-rewarded liberals have the decency to let someone else get an award? Why don’t they redistribute Emmys?

Hollywood loves to be ahead of the people, “educating” them along the path to progress. But they get remarkably upset when the people refuse to follow them. The people are supposed to bend their minds agreeably as the entertainment elite sculpts the “arc of justice.” A few swift kicks at the morons from the eminentoes on the Emmy stage are expected to work their magic.