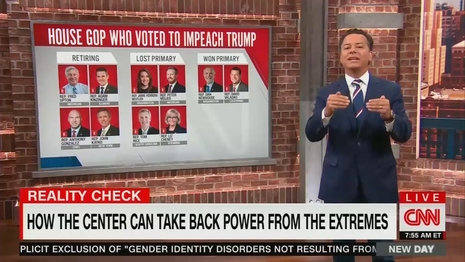 On Wednesday's New Day show, CNN's  John Avlon delivered another of his "Realty Check" segments which are often more about promoting liberal spin to attack conservatives than at attempt to be factually accurate.

CNN touted it as a lesson in how "the center can take power back from the extremes," as if CNN is anywhere in the center.

The liberal CNN analyst derided the GOP as a party that mostly nominates "hyperpartisan cowards and cranks."

After co-host Brianna Keilar set up the segment by recalling that Congresswoman Liz Cheney lost the Republican primary in Wyoming over her involvement with the January 6 Committee, Avlon began his analysis:

How exactly did Trump's election lies become the GOP litmus test? Well, look no further than the low turnout partisan primaries because it forces power to the extremes, often elevating the most play-to-the-base candidates and punishing principled independents. That, in turn, floods our political system with hyperpartisan cowards and cranks.

Then, without citing any evidence, he suggested that his pet issue of gerrymandering was to blame for four moderate Republicans choosing not to run for reelection:

Just take a look at the fates of the 10 House GOP members who had the spine to stand up to Donald Trump's election lies by voting for his impeachment. Well, their political hides are being paraded as a cautionary tale among conservatives to cow others into silence. But this was not the definitive verdict it might seem on the surface. See, four of them declined to run for re-election, largely because they faced tough races amid the rigged system of redistricting.

After arguing that the unusual nonpartisan primaries used in California and Washington state helped anti-Trump Republicans David Valadao and James Newhouse get renominated because independent and Democrat crossover voters could bolster moderate GOP candidates, Avlon concluded by citing Republican Senator Lisa Murkowski and former Democratic Senator Joe Lieberman for their history of getting reelected by running as independents after their own parties rejected them, and suggested that disaffected Republicans should do the same.

On the subject of Avlon reflexively blaming a "rigged system" of drawing districts for four anti-Trump Republicans choosing not to run for reelection, a closer look shows this claim has little to stand on.

Michigan's Fred Upton opted not to run for reelection in a state where an independent commission redrew the districts for the first time, so there was no partisan gerrymandering involved. In fact, it is ironic that Upton's similarly anti-Trump colleague Peter Meijer might have been reelected if the Republican legislature had controlled the process because they might have made fewer changes to his district, but the independent commission made significant changes to his district's boundaries forcing him to run in new territory.

It also happens that, even though the parties nominate candidates in separate primaries, Michigan state law allows voters to vote in either party's primaries, so Democrats and independents were allowed to vote in the Republican primary to support Meijer if they wanted to.

In New York, Congressman John Katko announced his retirement in January while the state's bipartisan commission was still trying to decide on a plan. Ultimately, a court implemented a plan that was drawn in a non-partisan manner.

And in Ohio, Anthony Gonzalez announced his retirement last September at a time when a bipartisan commission was trying to draw new lines for his state, and two months before the Republican legislature ultimately redrew districts that were slanted toward protecting Republican incumbents.

Adam Kinzinger was the only Republican whose decision to retire was linked to gerrymandering -- and that was done by Democrats who control the Illinois legislature. CNN notably had downplayed the role of Democrat gerrymandering when they covered Kinzinger's retirement announcement last year as they instead blamed Donald Trump.

This latest biased and misleading "Reality Check" was sponsored in part by Whole Foods.

BRIANNA KEILAR: So perhaps the chief critic of former President Trump in Congress, Wyoming Congresswoman Liz Cheney, has conceded defeat in her primary against election denier Harriet Hageman. Cheney is the latest Republican to lose in a hyperpartisan primary season for speaking out against Trump's election lies. John Avlon here with a "Reality Check."

JOHN AVLON: How exactly did Trump's election lies become the GOP litmus test? Well, look no further than the low turnout partisan primaries because it forces power to the extremes, often elevating the most play-to-the-base candidates and punishing principled independents. That, in turn, floods our political system with hyperpartisan cowards and cranks.

Just take a look at the fates of the 10 House GOP members who had the spine to stand up to Donald Trump's election lies by voting for his impeachment. Well, their political hides are being paraded as a cautionary tale among conservatives to cow others into silence.

But this was not the definitive verdict it might seem on the surface. See, four of them declined to run for re-election, largely because they faced tough races amid the rigged system of redistricting. Of the remaining six, two survived their primaries -- California's Dave Valadao and Washington state's Dan Newhouse. And not for nothing -- they both won in states with top-two open primaries where independents as well as Democrats and Republicans can vote. So that election reform helped create a more representative result.

Now, it's true Newhouse's Washington state colleague, Jamie Herrera Beutler, narrowly missed the top two in her re-election bid, ultimately losing by just over 1,000 votes to a Trump-backed candidate, but in a district where the Democrat came first.

Over in the swing state of Michigan, Representative Peter Meijer fell by less than 4,000 votes behind his conspiracy theory-spouting opponent who was shamefully boosted by Democrats in the final week because he was seen as easier to beat in the general election. Then, of course, back in June, South Carolina Republican Tom Rice fell to a Trump-backed candidate with less than a quarter turnout compared to a general election, even in that conservative district.

And finally, there's Liz Cheney last night, going down to defeat against election denier Harriet Hageman. Now, in previous years, this constitutional conservative won with more than 70 percent of the vote, but her decision to tell the truth about Trump was apparently disqualifying for a majority of GOP primary voters.

Well, in the case of principled Republican dissidents, those candidates might be better off running as independents where state laws allow. Yes, it's a daring and courageous path, but there's a clear demand. A Pew Research study finds the highest unfavorable view of both parties in decades. I know it sounds a little crazy to a two-party hive mind, but we've seen success here before. The most iconic example came in Alaska in 2010 when Tea Party insurgent Joe Miller narrowly beat Senator Lisa Murkowski in the GOP primary, but she went on to win as a write-in candidate.

On the other side of the aisle, lost a 2006 Democratic primary to the more liberal Ned Lamont, and then prevailed to win the general election as an independent. More recently, Buffalo Mayor Bran Brown launched a successful write-in candidate after losing his Democratic primary to a socialist. In all of these cases, activists howled, but the people ultimately got their say in a higher turnout general election. And that's how it should be, lest we forget the parties are not supposed to be the purpose of our politics

Now, this year we're seeing independent candidate Evan McMullin running against Republican incumbent Senator Mike Lee of Utah as well -- a state where a conservative not beholden to Trump has a far better chance of winning than a sacrificial Democrat.

Look, it's impossible to know how many more Republicans might have had the courage to stand up to Trump if they'd known their political fate would be decided by all the voters in their district rather than a handful of hardcore partisans, but that could make all the difference. And that's your "Realty Check."