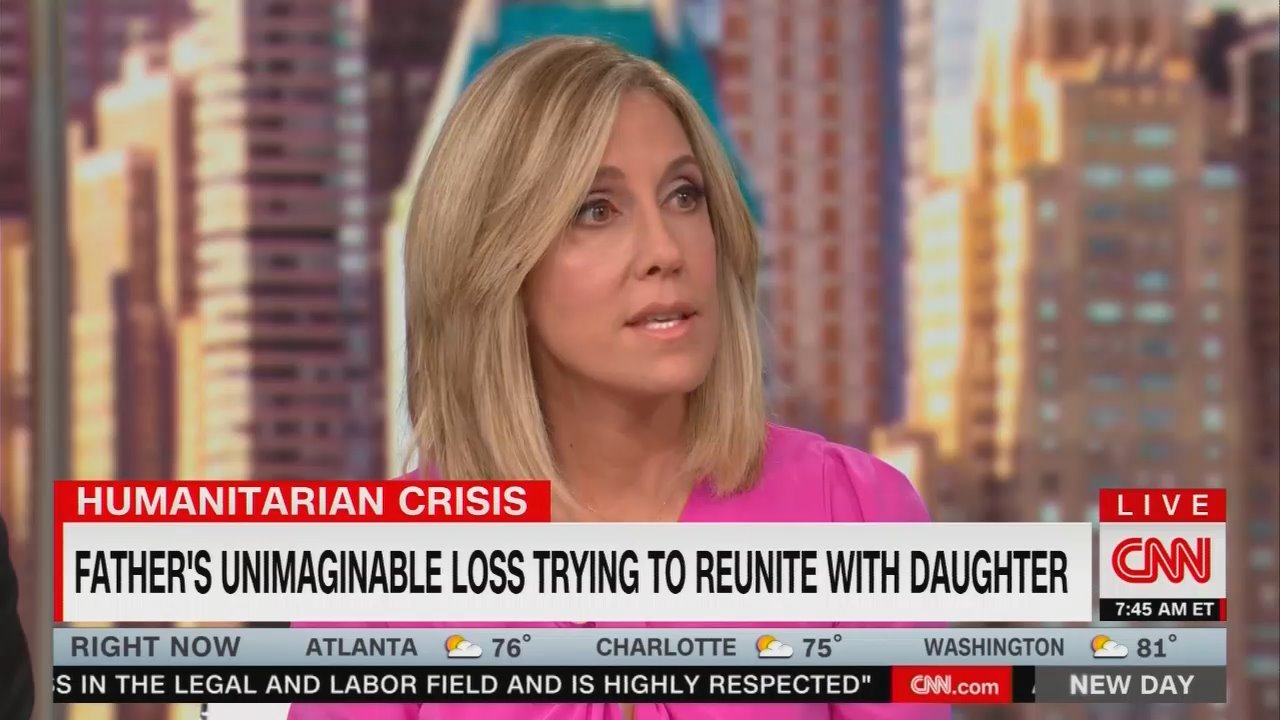 Alisyn Camerota and other CNN personalities have a persistently bad habit of misinforming their viewers by claiming that illegal immigrants aren't actually breaking the law as long as they apply for asylum after being caught sneaking into the country, in spite of liberals like George Washington University law professor Jonathan Turley admonishing his fellow liberals on the subject a year ago.

On Friday's New Day show, as correspondent Ed Lavandera informed viewers about the sad story of a girl from Honduras who committed suicide because her father has repeatedly been blocked from illegally entering the U.S. to join her, Camerota incorrectly stated that he was trying to enter "legally" even though her colleague had already explicitly stated that his entry was done "illegally."

At 7:41 a.m. Eastern, Camerota set up the report: "The broken immigration system is having a life and death impact on families, and CNN's Ed Lavandera spoke to one father who is preparing to bury his 13-year-old daughter. She attempted suicide after he was denied asylum."

In a pre-recorded piece, Lavandera began by recounting for viewers that Honduran national Manuel Gamez was recently given a temporary release from detention to visit his daughter Heydi before she is taken off life support after she tried to hang herself to death because her father failed to secure asylum in the U.S.

The CNN reporter then recounted: "This family's story captures the often excruciating reality of desperate families separated by a border. In 2014, Manuel Gamez was an undocumented immigrant who had spent seven years living on Long Island, New York, working as a mechanic."

After recalling that his father, who was taking care of Heydi, was murdered by MS-13 gang members in Honduras, the CNN reporter related that Gamez decided to try to relocate his daughter and a few other family members to the U.S. He noted that first he sent Heydi to the U.S., who was granted asylum and allowed to stay.

Lavandera then glossed over the circumstances of how Gamez tried to get into the U.S., making it sound like he might have sought asylum legally but then tried entering illegally after he was rejected: "Gamez thought if his daughter had been granted asylum, he would as well, but he was denied. After that, he crossed the border illegally twice, hoping to reunite with his daughter."

But, according to a New York Times article on the subject, Gamez was "apprehended" when he tried to enter the first time because, unlike in the past, there were more Border Patrol agents in the area, heavily suggesting that he must have been trying to enter illegally and get past agents undetected.

(The Times article also suggests he had left the U.S. the first time voluntarily to visit his family in Honduras after his father was murdered.)

Additionally, the CNN article on the subject, which Lavandera co-authored, recalls that, when he was deported the second time, Gamez was convicted of "illegal re-entry" before being deported, implying that his first entry that was intercepted by Border Patrol was also illegal.

The pre-recorded piece informed viewers that Heydi tried to commit suicide after learning that her father had been caught a third time. After the report concluded, as Camerota and Lavandera were further discussing the issue, Lavandera posed: "What does a family like this do, right? … What does this father do?"

Camerota wrongly claimed that Gamez tried to enter the U.S. "legally" as she responded: "Stay behind and be killed by MS-13 or attempt to cross into the U.S. legally by asking for asylum, but yet there are these separations."

If Camerota could just acknowledge that illegal immigrants like Mr, Gamez did break the law, she might be halfway toward concluding that actually obeying the law might lead to a better outcome for legitimate asylum seekers.