On Wednesday's Morning Joe, MSNBC again gave a demonstration of the phenomenon of right-leaning commentators -- who in some cases actually have a history of being pretty solidly conservative -- failing to insert much in the way of strident conservative commentary into the political discussion during their MSNBC appearances.

MSNBC contributor George Will declared that, even before the accusations of sexual molestation against Roy Moore surfaced, the Alabama Republican Senate candidate had already "disqualified" himself from the office because he was kicked off the bench twice when he was the state's supreme court chief justice. Host Joe Scarborough agreed with Will's analysis.

A bit later, when President Donald Trump's decision to relocate the U.S. embassy from Tel Aviv to Jerusalem was discussed, Will only gently argued in support of the idea of doing so, arguing that Israelis are unlikely to ever support giving up East Jerusalem to Palestinian Arab control anyway.

Fellow right-leaning MSNBC contributor Peggy Noonan was more cool on the idea of moving the embassy as she complained that the President did not make the case that it would improve matters and seemed to be merely keeping a campaign promise.

As previously documented by NewsBusters, on the same show, fellow panel member Chris Matthews and other MSNBC regulars reacted to the embassy move in a more overtly negative manner, as the comments of these right-leaning panel members did little to balance the discussions.

At one point, while criticizing Steve Bannon for his recent attacks on Mitt Romney, Scarborough even oddly claimed that "98 percent of the vote in Alabama" went to Romney during the 2012 presidential election, although it seems the MSNBC host must have been referring to self-described Republican voters.

On the bright side, the panel members -- even including the liberal Matthews -- at one point argued that Democrats have hurt themselves by pressing their candidates too far to the left on abortion as they fretted that Alabama Democratic Senate candidate Doug Jones may lose because of his extreme views supporting abortion.

Below is a transcript of relevant portions of the Wednesday, December 6, Morning Joe on MSNBC:

JOE SCARBOROUGH: But, Peggy, he says -- he attacks Mitt Romney who got 98 percent of the vote in Alabama in 2012 -- the general election. And all across the country, people are booing the names John McCain and George W. Bush when they're mentioned at Republican club meetings. 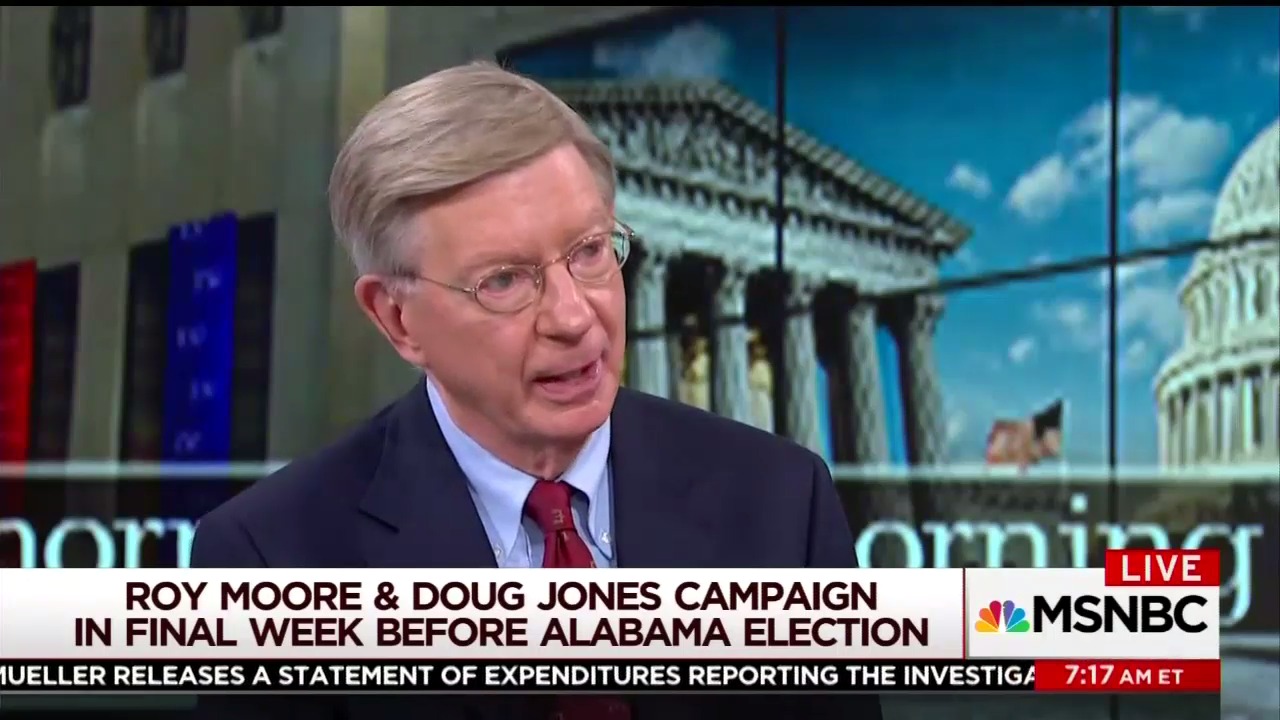 GEORGE WILL: And actually the charges of sexual predation are distracting us from something that happened earlier -- that this is a man who has twice been thrown off the bench in Alabama for his dislike of the American Constitution, his refusal to -- well, actually theocratic position that his religious conscience trumps the Constitution. Now, that disqualifies him surely from taking the oath that they take when they pledge to support and defend the Constitution of the United States. But now we've forgotten about all that -- we've forgotten that before the questions of his predatory sexual behavior came up, he was disqualified.

SCARBOROUGH: Even before then. That's a great point George makes. Even before that, I remember saying there's no way conservatives should vote for Roy Moore. A lot of people -- a lot of conservatives online were saying he was unfit because he'd been kicked off the bench twice.

WILL: He's (Trump is) not disrupting the peace process because there is no peace process, unless you count what Jared Kushner is doing -- the trust fund guy comes to Washington and buys a house and says, "I'm going to fix the Middle East next." So there is no peace process to disrupt at this point. And there is something to be said for saying, "If we're going to have a peace process going forward, let's be clear and realistic about what is not negotiable." And I think it's fair to say that as long as Israel is a democracy responsive to Israel's public opinion, they're not going to divide Jerusalem, period, and you might as well say that going in.

PEGGY NOONAN: When you make a big decision like this, a big change, there should be a reason beyond, "Oh, but I mentioned it in the campaign, and I said I'd do it, so now I must do it." You make a big change like this, you have to come forward and make the case that it makes something better, that it will improve any situation there, that it will make people safer, that it will add to that decision in any way. Without that, it just appears to be another antic decision made without full information.