On Friday, the CBS Evening News conspicuously did not make time to inform its viewers of the outcome of the trial of an illegal immigrant charged in the killing of San Francisco resident Kate Steinle.

Although all three broadcast morning newscasts had highlighted the failure to get a murder conviction in the case, on the evening shows, CBS omitted the story while ABC's World News Tonight delivered a full report, and the NBC Nightly News gave viewers a 33-second brief.

Below are transcripts of the relevant portions of ABC's World News Tonight, the NBC Nightly News, and FNC's Special Report with Bret Baier from Friday, December 1:

DAVID MUIR: Next to the outrage here after the verdict in San Francisco. A jury acquitting a homeless, undocumented immigrant in the killing of Kate Steinle, who died on a pier by the bay while walking with her father. Kate's death has been a political lightning rod, but the jurors were asked to consider only the facts of the case -- including whether she was targeted or whether that bullet ricocheted off the pier. ABC's Clayton Sandell is in San Francisco tonight. 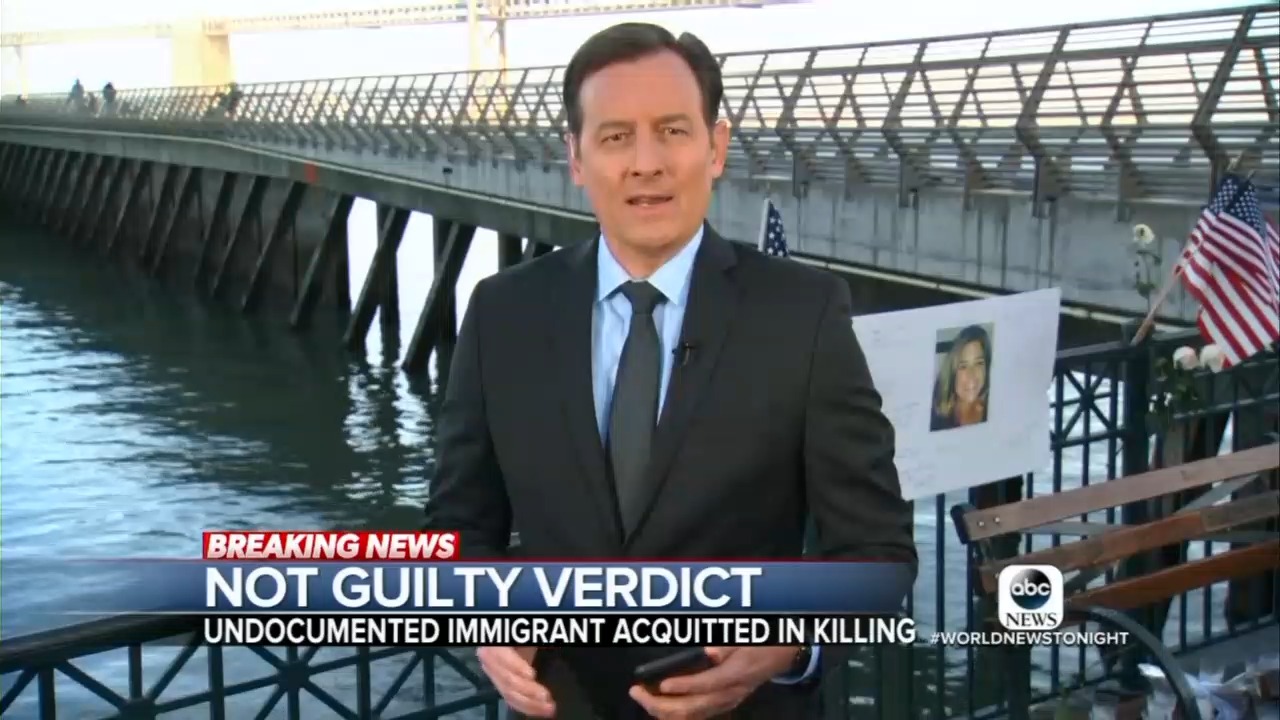 CLAYTON SANDELL: For Kate Steinle's family, the not guilty verdicts are a new shock after the 32-year-old was gunned down in 2015 while strolling along San Francisco's waterfront with her father.

JIM STEINLE, FATHER OF KATE STEINLE: You could feel she was fighting and gasping for every breath, and she fought right up to the end.

DONALD TRUMP (during presidential campaign): He was an illegal immigrant, came over, went to San Francisco. We have to end this sanctuary cities crap fast. Fast.

SANDELL: Jurors were never told that about three months before the shooting, Garcia Zarate had been in jail on drug crimes, but San Francisco authorities released him, ignoring a request to turn him over to immigration agents. He never denied shooting Steinle.

UNIDENTIFIED MALE VOICE: Did you shoot Kate Steinle? The lady who was down on pier 14?

SANDELL: But, using crime scene data, defense attorneys argued her death was a freak accident. He says he found that gun, and when he picked it up, it went off automatically. The bullet ricocheting off the pavement, going about another 80 feet, and hitting Steinle in the back. The jury acquitted him of murder and manslaughter, but found him guilty for possessing a gun. ... Now, because of that gun conviction, he could spend additional time in jail, but, after that, federal authorities want to take him into custody and they hope deport him for the sixth and final time.

From the NBC Nightly News:

LESTER HOLT: There's late word, a federal arrest warrant has been issued for an undocumented felon acquitted for the 2015 killing of a woman in San Francisco. The new warrant accuses Jose Ines Garcia Zarate of violating his supervised release, and comes a day after he was found not guilty of shooting and killing Kate Steinle as she walked along a pier popular with tourists. The defense portrayed the shooting as accidental. President Trump seized on Steinle's death during the campaign as evidence the U.S. needs a border wall. He called the verdict "disgraceful."

BRET BAIER: North of here in California, an illegal immigrant who was found not guilty in the shooting death of a San Francisco woman may not be out of the legal woods yet. Correspondent Claudia Cowan tells us why.

COWAN: Charges that include felon illegal reentry, which carries a sentence of up to 10 years. Condemnation of the controversial verdict was swift. President Trump calling it "disgraceful," and, of the defendant, saying, quote, "His exoneration is a complete travesty of justice. Build the wall." In fact, the San Francisco jury never heard about Zarate's immigration and criminal history, and, based on the evidence presented, decided Kate Steinle's death by a ricocheted bullet was an accident.