The narrative that blacks are violently targeted by police officers out of racism is so entrenched in the media that journalists sometimes forget that some police officers involved in widely-reported violence with black suspects are either black or Hispanic, and not white.

The CNN correspondent's mistake came within a piece recounting reports that Russians have tried to use social media to heat up political tensions in the United States. After recalling the case of an apparently Russia-based group called Don't Shoot Us that paints American police officers as biased against blacks and tries to inspire protests, Griffin recalled:

The Russians not only exploited divisive racial issues in the U.S, CNN has learned Don't Shoot Us was operating almost a rapid response to those shootings. In Minnesota last July, the day after Philando Castile was killed by a white police officer, Don't Shoot Us was using social media to organize its own protest.

He added: "The effort failed because local community members determined something was wrong. Turns out they were right, and their suspicions had Russian links."

Of course, prominent left-leaning American news sources like CNN and the broadcast networks also do their part to stoke racial tensions as they selectively spend much more time reporting on blacks who are killed by police officers -- even though whites killed by police outnumber blacks by a 2-1 margin -- giving the impression that it is nearly always blacks who are targeted.

Former Officer Yanez -- who was acquitted of criminal charges -- notably resigned his position after making a severance agreement with his police department. And Castile's mother received a $3 million settlement from the city.

Below is a complete transcript of CNN's report from the Thursday, October 12, Erin Burnett OutFront:

ERIN BURNETT: This as an exclusive CNN investigation finds that Russia's attempts to meddle in the election went well beyond Facebook and Twitter, including an app that nearly 30 million Americans were using daily at the time. Drew Griffin is out front. 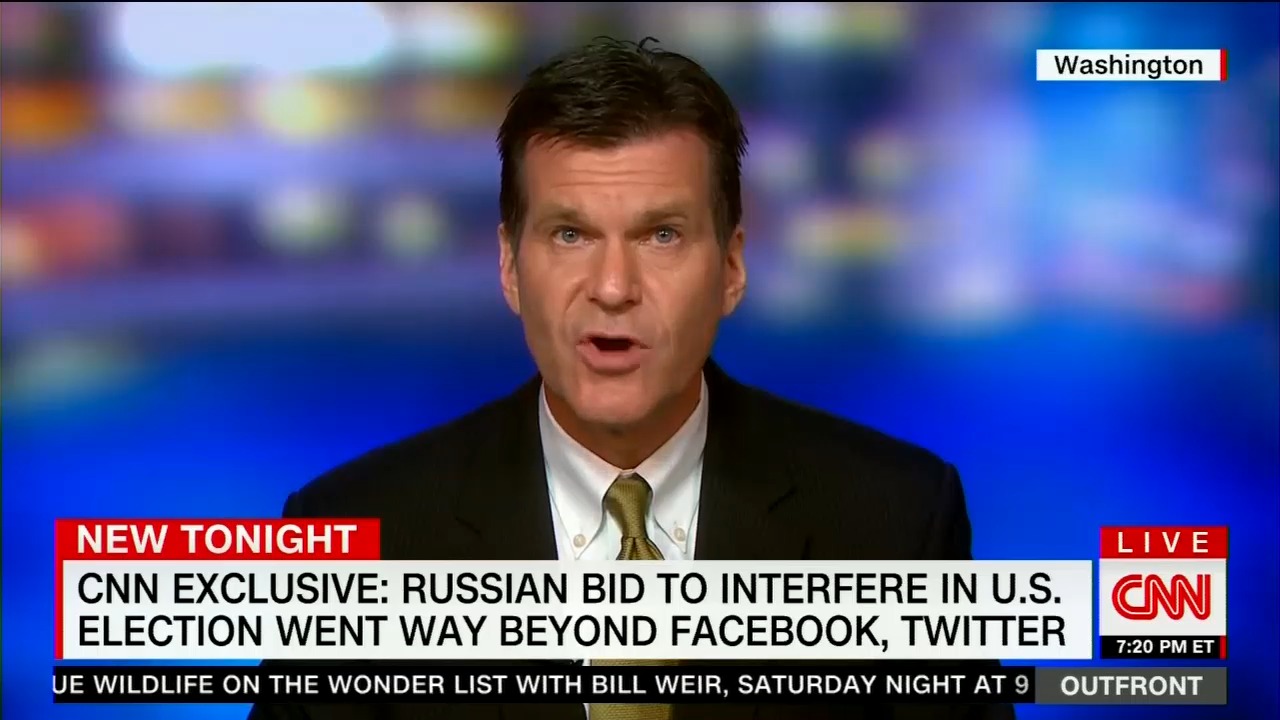 DREW GRIFFIN: It was a strange email that came directly to the desk of Baltimore City Paper editor Brandon Weigel. Don't Shoot Us -- a group claiming to be made up of black activists -- was promoting a protest outside the upcoming court hearing of a Baltimore police officer involved in the death of Freddie Gray. They wanted Weigel to cover it, but he was immediately suspicious.

BRANDON WEIGEL, BALTIMORE CITY PAPER: It wasn't a group that I had ever heard of either locally or nationally.

GRIFFIN: CNN has now learned Don't Shoot Us wasn't local, nor national -- it was Russian. And the black activism Don't Shoot Us was promoting in Baltimore was part of a much bigger strategy Georgetown Professor Mark Jacobsen says that was aimed at attacking the U.S. democratic system.

MARK JACOBSEN, GEORGETOWN UNIVERSITY: What the Russians are doing by fomenting distrust for the American government and by also trying to organize rallies is what you do when you want to destroy a country from within. These are warlike acts. These are acts designed to destroy the United States.

GRIFFIN: A CNN investigation shows Russia's propaganda attack on the U.S. went beyond using fake accounts and ads using Facebook and Twitter. CNN tracked multiple accounts from Don't Shoot Us across the internet -- a website that boasted 300,000 followers, a YouTube channel with videos of police brutality, a tumbler account. Most surprising, a post announcing a contest on Pokemon Go when it was at its most popular directing gamers to visit locations where alleged police brutality took place. All part of a Kremlin-connected campaign of misinformation that actively sought to influence opinion and meddle inside the U.S.

The email that arrived on Brandon Weigel's City Paper computer said: "This is 'Don't Shoot.'" "We raise awareness of police violence against people of color." "The idea is to protest in front of the Baltimore City Courthouse" and "demand justice for Freddie Gray."

WEIGEL: It makes sense that it would be a hot-button issue, but I didn't think it was something that the Russians would have exploited.

GRIFFIN: The Russians not only exploited divisive racial issues in the U.S, CNN has learned Don't Shoot Us was operating almost a rapid response to those shootings.

In Minnesota last July, the day after Philando Castile was killed by a white police officer, Don't Shoot Us was using social media to organize its own protest. The effort failed because local community members determined something was wrong. Turns out they were right, and their suspicions had Russian links.

Erin, the evidence to the extent the Russians went to divide the American electorate just keeps on growing. Blacktivist is another Russian-operated site that was used to try to sow discord between the police and blacks in this country. It went so far even to sell its own Blacktivist T-shirts. As far as we know, the people who engage with these sites had no idea until now these sites were back and actually created by Russians, Erin.

BURNETT: All right, thank you very much, Drew.