On Friday's New Day on CNN, during a discussion in which panel members fretted over Republican reaction to GOP Rep.-elect Greg Gianforte violently attacking a reporter, The Atlantic's David Frum managed to inject race into the discussion as he theorized about what Rush Limbaugh would have done if Gianforte were a black Democrat.

Frum: "Had the congressman been a black Democrat, imagine what Rush Limbaugh would have said. Rush Limbaugh called the attack 'studly' and 'manly.' Imagine -- it would have -- you would have had an explosion of racial provocation."

After substitute co-host John Berman asked what Republicans should say in response to the Montana situation, CNN media analyst Bill Carter called on Republicans to "say something serious," and started to refer to the Donald Trump presidential campaign as he responded:

I think they have to come out and say something serious now. I mean, they've basically looked the other way for an awful lot of this. This isn't the first incident. There have been other reporters that have been pushed around. There was this reporter that was pushed around by his campaign manager during the campaign, you know. In the rallies, they'd be penned up --

In the United States today, it seems all politics has become entirely situational, and Republicans have put party over civility.  Had Ben been attacked by a Democrat, many on the right who are refusing to believe the assault occurred -- or outright praising it -- would be hailing him as a victim of liberal rage.

Frum then jumped in and injected race into the discussion:

Well, let's make it more extreme. Had the congressman been a black Democrat, imagine what Rush Limbaugh would have said. Rush Limbaugh called the attack "studly" and "manly." Imagine -- it would have -- you would have had an explosion of racial provocation. 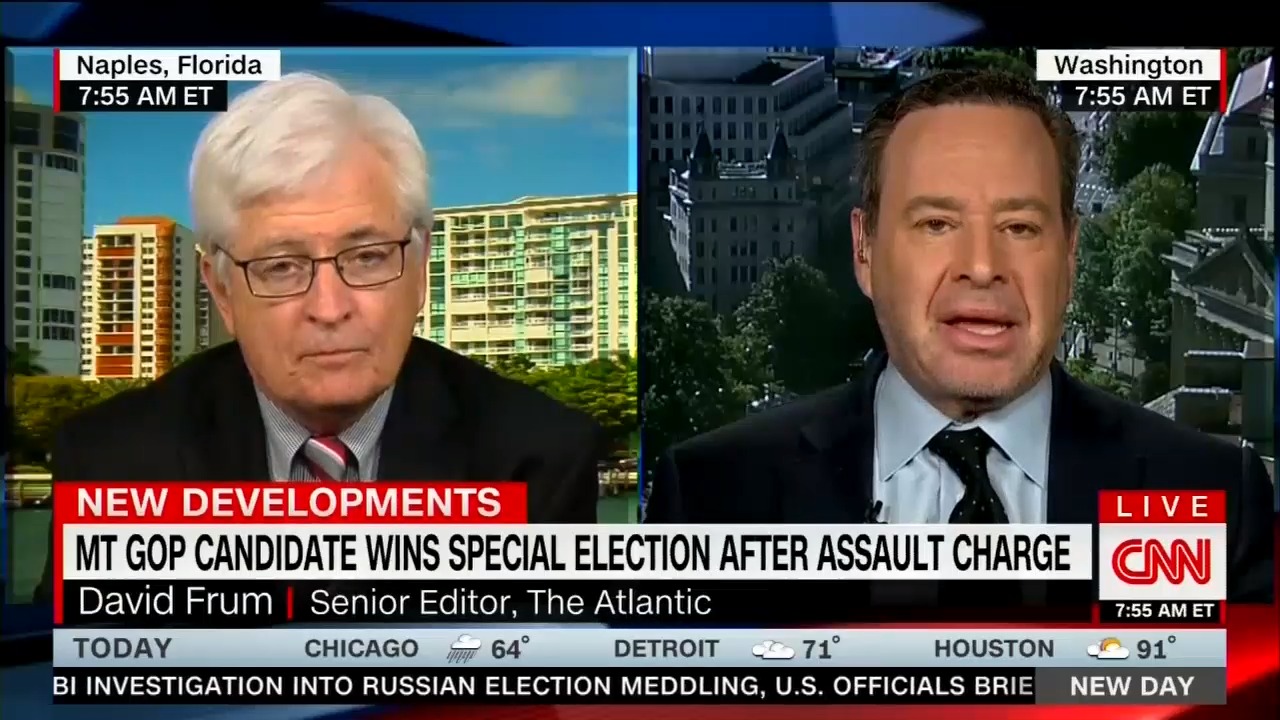 You also have to say, the, in this country, we're supposed to have this -- this is freedom of the press. This is First Amendment stuff. I mean, if you want to celebrate people, you know, attacking reporters, yeah, I guess that's why you back someone like Putin who, you know, basically has them, you know, either murdered or eliminated in other ways. We don't do that -- we're not supposed to do that in this country.

We're supposed to stand up for our principles, not celebrate someone who's violating the principles, which is what's happening here. And if the Republicans want to just shrug it off and say, "Oh, well, you know, it was a momentary thing," this is going on way to much. Somebody has to stop it. We did have Rep. Sanford come out and say, "This is really ugly," and somebody has to start saying that.