Monday's New Day on CNN displayed a classic example of how difficult it is to have a conversation with a liberal about racial issues. If you present relevant facts that are completely accurate, you run the risk of being accused of racism, especially if the liberal you're speaking to has a different vision of what your choice of words should have been.

Moments after CNN law enforcement analyst Harry Houck recited NYPD stats finding that New York City's black population commits crime at a rate much more disproportionate compared to their percentage of the population, he and liberal CNN political commentator Marc Lamont Hill got into a debate about whether the Ferguson police department was found to be racist based on emails that had been circulated.

After Hill declared, "If Harry stood on national TV and just said that black people are prone to criminality, I wouldn't even respond to that," leading Houck to respond, "Well, they are," as he referred back to the aforementioned crime statistics. The two then got into a heated exchange that went on for almost three minutes.

Below is a transcript of the relevant portion of the Monday, July 11, New Day on CNN: 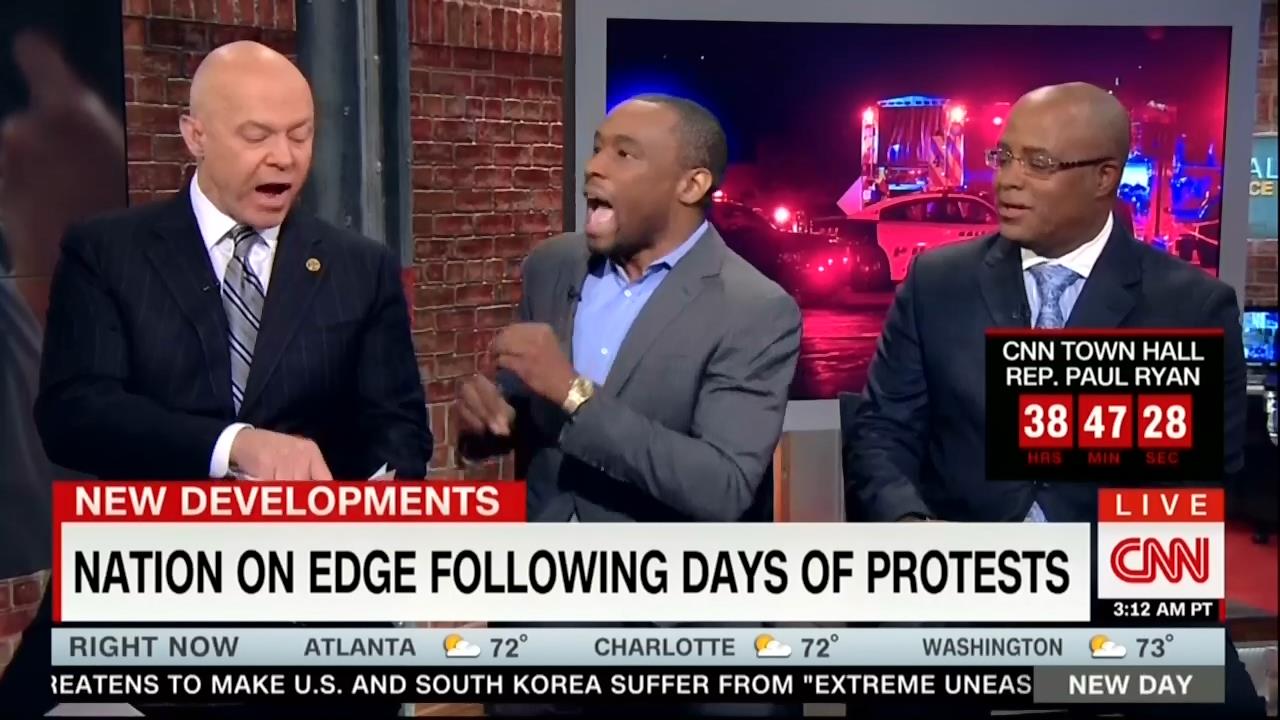 6:11 a.m. ET
MARC LAMONT HILL, CNN POLITICAL COMMENTATOR: We did an investigation of the Ferguson Police Department -- I talk about this in my new book -- and there is considerable evidence of racism, so it isn't true that there was no evidence of racism. There were racist emails, racist phone calls, racist practices-

HARRY HOUCK, CNN LAW ENFORCEMENT ANALYST: There have been three emails, I believe, that were racist, correct?

HILL: If Harry stood on national TV and just said that black people are prone to criminality, I wouldn't even respond to that, okay?

HOUCK: Well, they are.

HILL: You think black people are prone to criminality?

HOUCK: What does this say?

HILL: I don't know what that says, but I know-

HOUCK: The chief can back me up because he's come-

HILL: He's not going to stand on national TV and say black people are prone to criminality.

HOUCK: I'm telling you 75 percent of shootings are blacks.

HOUCK: Seventy-five percent of shootings -- what you're doing is just misinterpreting something else I'm saying into your narrative. That's what you do.

HILL: I think you just don't know what "prone" means.

PHILIP BANKS, FORMER NYPD CHIEF OF DEPARTMENT: First of all, I'm not going to say blacks are prone to crime because I don't believe in it and it's not true.

HILL: Of course it's not true. It's racist.

HOUCK: It is not racist.

HILL: To say that black people are prone to criminality!

HOUCK: That is not what I said! What I said is that 75 percent of the shootings that occur in New York City are done by blacks, all right, and you keep talking about this disproportionate amount of blacks and white in jail!

HILL: Because it is disproportionate, Harry!

HOUCK: No, it's not. It is, yeah, by the definition (inaudible).

CUOMO: That's exactly what I'm going to say. This is a conversation that it's not always easy to have. You're going to have clashes of perspective. But we all know this, all right, if you do not have this conversation the right way, you do not move forward. You can discuss the difference between saying an entire race is prone to criminality -- which I know is not what you mean -- and that statistically-

HILL: That's why I was trying to correct him.

HOUCK: But that's not what I meant.

HILL: l And that's why I said, "I don't think you meant that," because that's racist.