On Sunday's This Week show on ABC, during a panel discussion of Paul Ryan's reluctance to endorse GOP presidential candidate Donald Trump, The Nation editor Katrina Vanden Heuvel was the latest liberal in the dominant media to repeat the discredited claim that former President Ronald Reagan began his 1980 presidential campaign at the site of a racist murder in Philadelphia, Mississippi.

More surprisingly, no one on the panel pushed back against her, even though there were three participants with right-leaning histories present.

After asserting that there is a "crackup" of the Republican party because "the elites didn't deliver for the base," she then blamed Republicans for creating Trump as a "Frankenstein," and tied in Reagan as she accused the former President of exploiting racism: 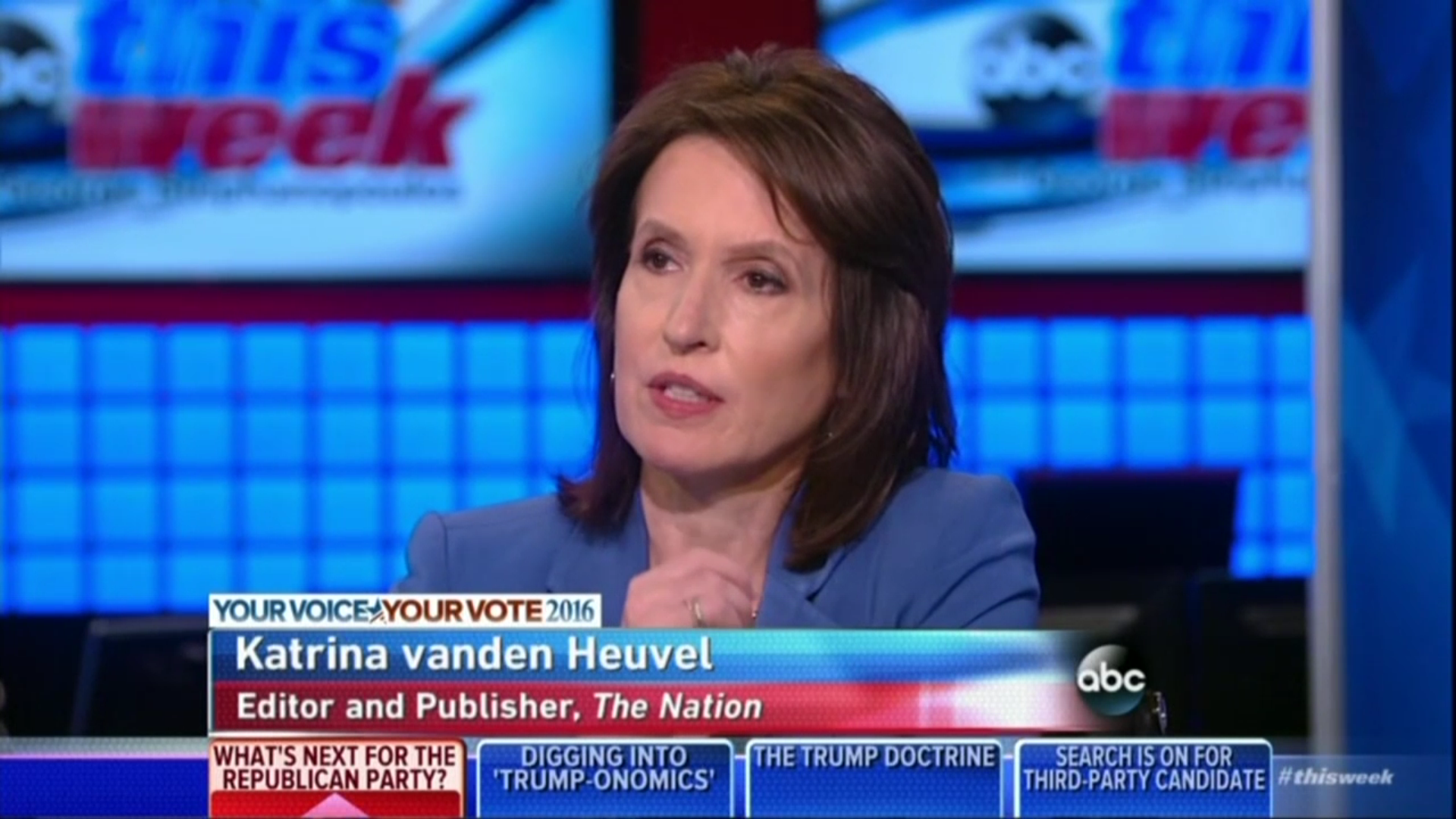 We're also seeing -- let's be honest -- Donald Trump is like the Republicans' Frankenstein with orange hair. I mean, the Republican party is reaping what it has sowed. There's all this nostalgia about Ronald Reagan. Ronald Reagan announced his candidacy in Philadelphia, Mississippi, the site for where three civil rights workers were killed by white supremacists

This is a party which has exploited what Trump is now exploiting -- dog whistle racism, grievances, resentments. We need an inclusive populism, not the scapegoating populism, to speak to the real anxieties and fears and frustrations, but with hope, not demonization, as Donald Trump is doing.

But Reagan's appearance at the Neshoba County Fair in Mississippi -- which was in August 1980 and therefore not even near the beginning of his campaign -- took place a few miles away from the city of Philadelphia, Mississippi, at a fair that was known for attracting a large number of the state's residents. Even the murders themselves did not actually take place in Philadelphia, making it a leap for liberals to try to connect the two events.

The speech did not include any racial issues, and, as liberals try to connect his states' rights talk to racism, that portion of the speech was focused mainly on the country's economic problems.

I think Katrina is right, I think, in part on this, is that there is this fundamental existential question that the Republican elites have to ask themselves, is: What party is Paul Ryan the future of? Because the party right now says, "We want to ban Muslims," they voted for Donald Trump, "We want to build a wall," that is who the party is, and so, to me, yes, Paul Ryan is the future, but it is of a future that is a dinosaur party that is gone.

Vanden Heuvel joins CNN political commentator Donna Brazile appearing on CNN, former MSNBC commentator Michael Eric Dyson appearing as a guest on CNN, and HBO's Bill Maher on his Real Time show as prominent liberals in the media who have repeated the discredited claim against Reagan in recent months.