Appearing as a guest on Friday's Legal View with Ashleigh Banfield, liberal CNN commentator Marc Lamont Hill slammed GOP presidential candidate Ben Carson as having "racial amnesia and racial blindness" for not taking a left-wing, divisive view on race in Thursday night's Republican debate, as Hill accused the Republican base of being "race deniers."

The CNN commentator also sounded like he may have been hinting that Republicans "hate" black Americans as he bizarrely charged that GOPers "hate certain people and love" Dr. Carson.

At about 12:30 p.m., host Ashleigh Banfield brought up the issue of racial issues and the GOP debate:

I was interested in sort of watching for how race issues would be touched on in this Republican debate. And, Amy Holmes, Ben Carson had a fascinating answer for why reporters ask him about his lack of comment on race. But there wasn't a whole lot of talk about Black Lives Matter, etc. Did you think Ben Carson did or said the right thing? Or do you think he squandered an opportunity to try to really sort of cross over into the general election and get people on board for race issues and how he feels about them?

After right-leaning guest Amy Holmes lavished praise on Dr. Carson and invoked President Barack Obama's past words about there not being a "black America" and a "white America," the liberal Hill began his response:

Well, one, I think that his answer is very different than Barack Obama. I disagreed with Barack Obama's response, too, back in 2004, 2006. I actually thought it was an awful answer then, too, because there is a black America, and there very clearly is a white America.

Hill went after Dr. Carson as he added: 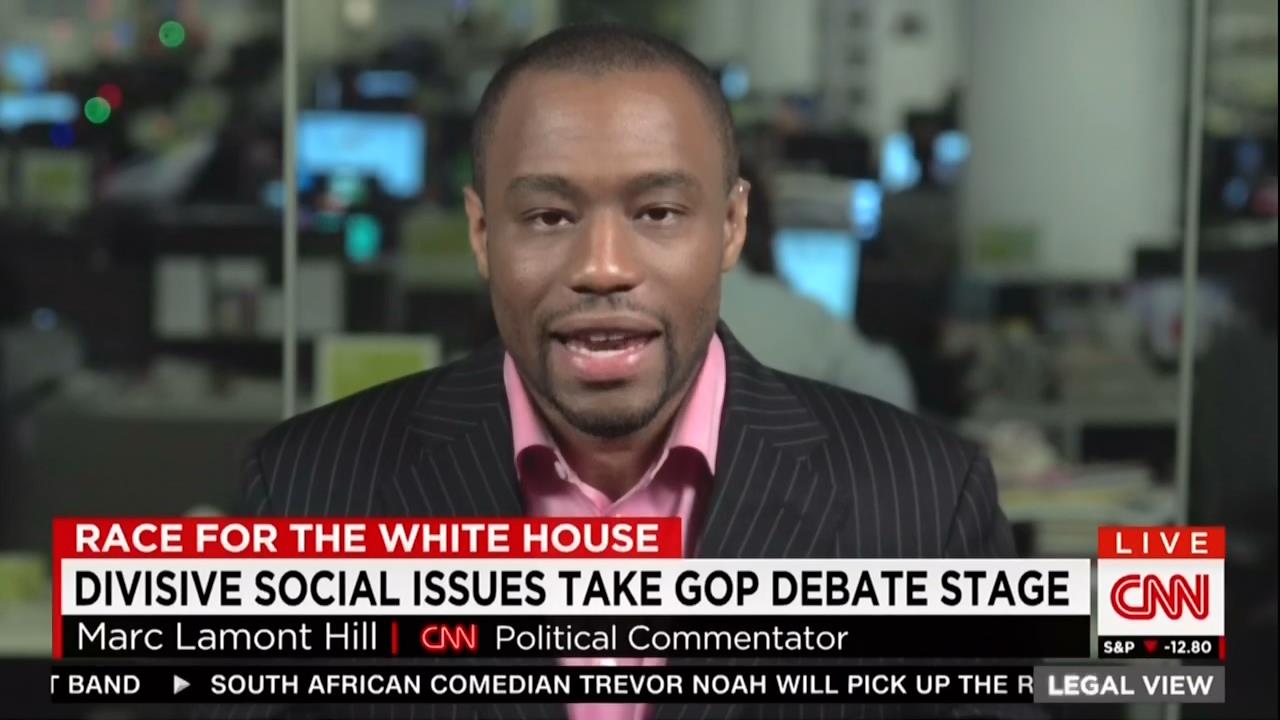 But what Ben Carson was saying was even a step further into racial amnesia and racial blindness. And that was that he was essentially saying that race isn't real, that, you know, when you cut people and you operate as a doctor, you realize that the human body is one thing and race is some kind of social fiction. And the truth is, race is very real. Race may not be a biological reality, but it is a social construct. It may not effect the physical body, but it effects the body politic.

And Ben Carson, I'm sure he scored big point with Republicans, big points with the base because they want to be race deniers. They want to deny the existence of race. And when you have a black Republican who is willing to stand up and say race doesn't matter in a certain kind of way, it will score big points. They will continue to hate certain people and love him, and that's a problem.

Holmes winced after hearing Hill's answer but did not have time to respond as the segment was coming to an end. Host Banfield did not call out his incendiary suggestion as she voiced agreement with some of his answer:

All right, well, maybe that's the goal that there is no racial issue in this country, but it's certainly, I think, as you said, it's not the reality right now.