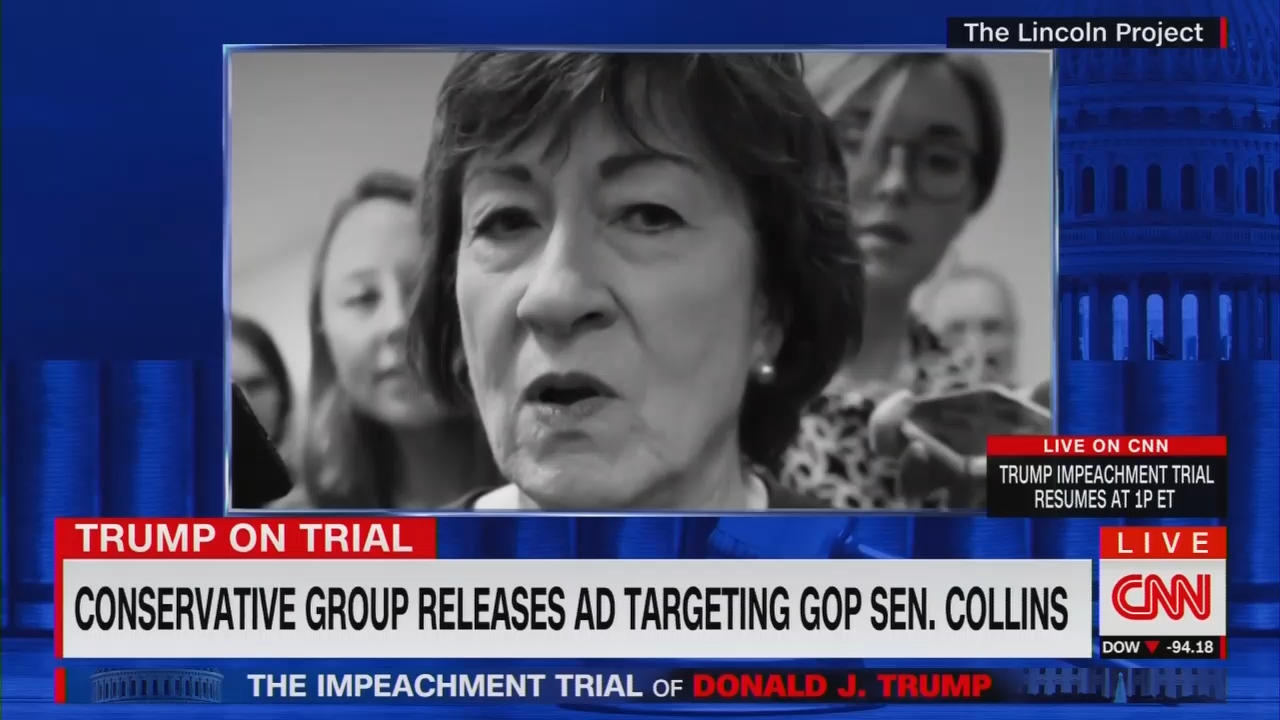 One could be forgiven for inferring from this morning’s CNN chyron that a conservative group was releasing attack ads against Senator Susan Collins (R-ME); after all, the chyron read: “Conservative Group Releases Ad Targeting GOP Sen. Collins.” But in reality, the “conservative group” in question is a PAC created by frequent CNN guest George Conway, and populated by formerly Republican never-Trumpers like Rick Wilson and Steve Schmidt.

The network then ran the ad, which attempted to pressure Senator Collins into voting for witnesses and documents in the impeachment trial. Inside Politics anchor John King put on his Democratic operative hat and spent the next several minutes blatantly advising Conway on how best to pressure Collins.

King insisted multiple times that Conway’s group ought to buy ad space in the Senator’s home state of Maine:

Susan Collins is on the ballot this year. That could be a very powerful ad against her, in a very competitive race. We just checked; there’s no money behind it in the state of Maine. There’s no money behind it, period. It’s not even on Facebook right now, it’s just posted online on YouTube. You can find it if you want it, and advocate of the group who are critical of her are tweeting about it, but if you’re a Maine voter, and you’re watching television or you’re logging onto Facebook, you’re not going to see it unless somebody sends it to you.

The CNN host opined that “targeting” Collins was a “smart” idea, but warned: “again, I would just say, if you want to get her in Maine, you should spend some money in Maine.”

Imagine if an actual conservative group had tried to influence the vote of a moderate Democratic Senator like Joe Manchin (D-WV), and that Fox News had run a segment offering that group free advice. In that scenario, it’s not difficult to imagine this same CNN panel sternly reminding viewers that the Senators were jurors in a trial, and that any attempt to influence their votes amounted to jury tampering.

Instead, George Conway got 20 seconds of free airtime for his ad on CNN, and some half-decent marketing advice to boot.

A transcript of the segment will be included shortly.