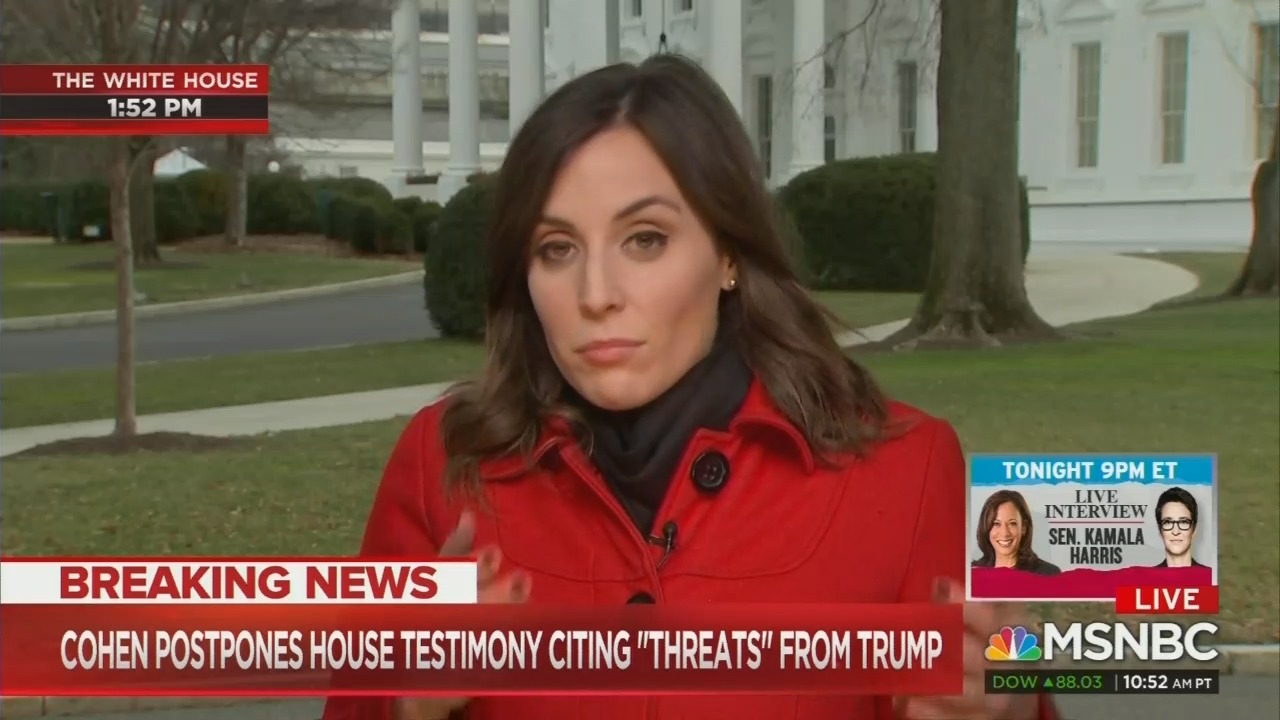 For most, BuzzFeed’s recent reporting debacle is, both literally and figuratively, last week’s news. However, there are still some holdouts over at MSNBC who have continued to imply that the story might be true, even after Special Counsel Mueller’s office flatly denied it.

First, a quick refresher: late on January 17, BuzzFeed News published an article claiming that the Special Counsel’s office possessed irrefutable evidence that President Trump had instructed his former attorney Michael Cohen to lie to Congress. The following evening, after a day filled with gleeful conversations about impeachment across cable news, the Special Counsel’s office made an unprecedented move and outright contradicted BuzzFeed’s reporting.

But curiously, the claim that the President ordered Cohen to lie to Congress has continued to pop up in the occasional MSNBC panel discussion.

On Jaunary 23, NBC News chief White House correspondent Hallie Jackson falsely reported during the 1:00 pm EST hour of MSNBC Live that Cohen himself had made the allegation:  “Again, he's headed to prison soon for crimes that he has admitted to doing. He pointed the finger at the President as the person who directed him to do that, Chris.”

Jackson never mentioned that the Special Counsel’s office had denied this claim. It has never been reported that Cohen himself claimed the President instructed him to lie to Congress. And in fact, Cohen previously testified in Federal Court that he had done so of his own volition.

It should be noted that Cohen did testify the President had instructed him to facilitate hush-money payments to the likes of Stormy Daniels and Karen McDougal. However, it would be a stretch for Jackson to claim that she had been referring to those payments, given that she made these comments during a discussion of Cohen’s questionable credibility in light of his admitted perjury.

Less than an hour later that same day, NBC News national security reporter Ken Dilanian suggested – with no evidence – that the Special Counsel’s office might have been mistaken, and that further investigation was necessary to discern the truth. Dilanian expressed hope that Cohen’s testimony would help answer “...this hundred million-dollar question of whether, as BuzzFeed reported, the President instructed him to lie to Congress about the timing of the Trump Tower Moscow deal, or not as the Mueller team seems to be suggesting.”

That evening on Hardball, Natasha Bertrand of The Atlantic remarked that House Democrats would likely file impeachment articles of impeachment “if evidence is released showing that the President did tell Michael Cohen to lie.” Like Jackson, Bertrand completely neglected to mention the statement by Mueller spokesman Peter Carr, which read as follows:

BuzzFeed’s description of specific statements to the Special Counsel’s Office, and characterization of documents and testimony obtained by this office, regarding Michael Cohen’s Congressional testimony are not accurate.

It is both dishonest and irresponsible for journalists on MSNBC to continue insisting that BuzzFeed’s reporting may yet be vindicated. Such behavior is particularly unbecoming of a network that has long portrayed Mueller as a paragon of truth and justice.

Click "expand" below for partial transcripts of the relevant segments:

HALLIE JACKSON: And the line that you frequently will hear from sources here is that Michael Cohen, they say, “Listen, Michael Cohen’s a liar, why would you believe anything he says?”

As you know, of course, Michael has admitted to breaking the law by not telling the truth to people who were looking to get the truth from him. And so, the White House officials and others outside, but inside the President’s orbit that we’ve talked to have consistently pointed to that as a real question of Michael Cohen’s credibility. Given that, again, he's headed to prison soon for crimes that he has admitted to doing. He pointed the finger at the President as the person who directed him to do that, Chris. So the credibility question is still one that, of course, lingers over Cohen.

KEN DILANIAN: We should just take a step back to talk about how unusual, unprecedented it is for the President of the United States to be attacking people who are witnesses, potentially, against him.

But I would also add, Katy, that Chariman Elijah Cummings did tell our colleague Mike Memoli about a week or so ago that he had spoken to Michael Cohen and Cohen was ready to testify. So we shouldn’t discount the possibility that there are other factors driving this postponement. Perhaps consulting with prosecutors and the Mueller team about what exactly Michael Cohen – what questions he can and cannot answer, particularly this hundred million-dollar question of whether, as BuzzFeed reported, the President instructed him to lie to Congress about the timing of the Moscow Trump Tower deal, or not, as the Mueller team seems to be suggesting.

NATASHA BERTRAND: But [Democrats] have said -- and they have been very strong on this point -- that they`re not just sitting on their hands and waiting to see what Mueller produces.

For example, if evidence is released showing that the President did tell Michael Cohen to lie, showing that the president maybe did actually participate directly in paying off these women during the election, and that that was an actual crime, then they are going to investigate that and they are going to make judgments about whether or not that is a high crime and misdemeanor.

But they are not just sitting on their hands about this. And that is something they want to make very clear.